Lewis Hamilton and Valtteri Bottas say the risk of losing ground off the line was why Mercedes opted against starting on the mediums for Formula 1's 2021 Spanish Grand Prix.

The Black Arrows squad regularly takes the middle compound tyre in qualifying to give it more strategic options in races, where the yellow-walled rubber is also generally more durable compared to the softs the rest of the top 10 runners take to ensure their Q3 places.

Red Bull usually gives Max Verstappen a similar strategy, but all three frontrunners eschewed that approach in qualifying at Barcelona on Saturday.

That means that all 10 of the Q3 runners will be starting the race on the soft compounds – exactly as they did in the 2020 Spanish GP.

Speaking in the post-qualifying press conference, Bottas explained that the thinking behind Mercedes not taking its typical Q2 tactics was routed in the difficulty of passing at Barcelona and the lack of grip the mediums would provide at the race start compared to the softs.

"Here, the track position is pretty important, so just didn't want to lose any ground at the race start – that's the main thing," said the Finn.

Hamilton explained that "it's 600m down to Turn 1, so six metres difference [in grip off the line] between the tyres, there's no advantage".

He added: "Especially if you do happen to get the medium in position and the car behind is on a soft, for example, and they box – [your team will] pull you in anyway.

"So then you don't have the benefit [of the mediums being more durable] and you've just given up an extra opportunity. So that's why." 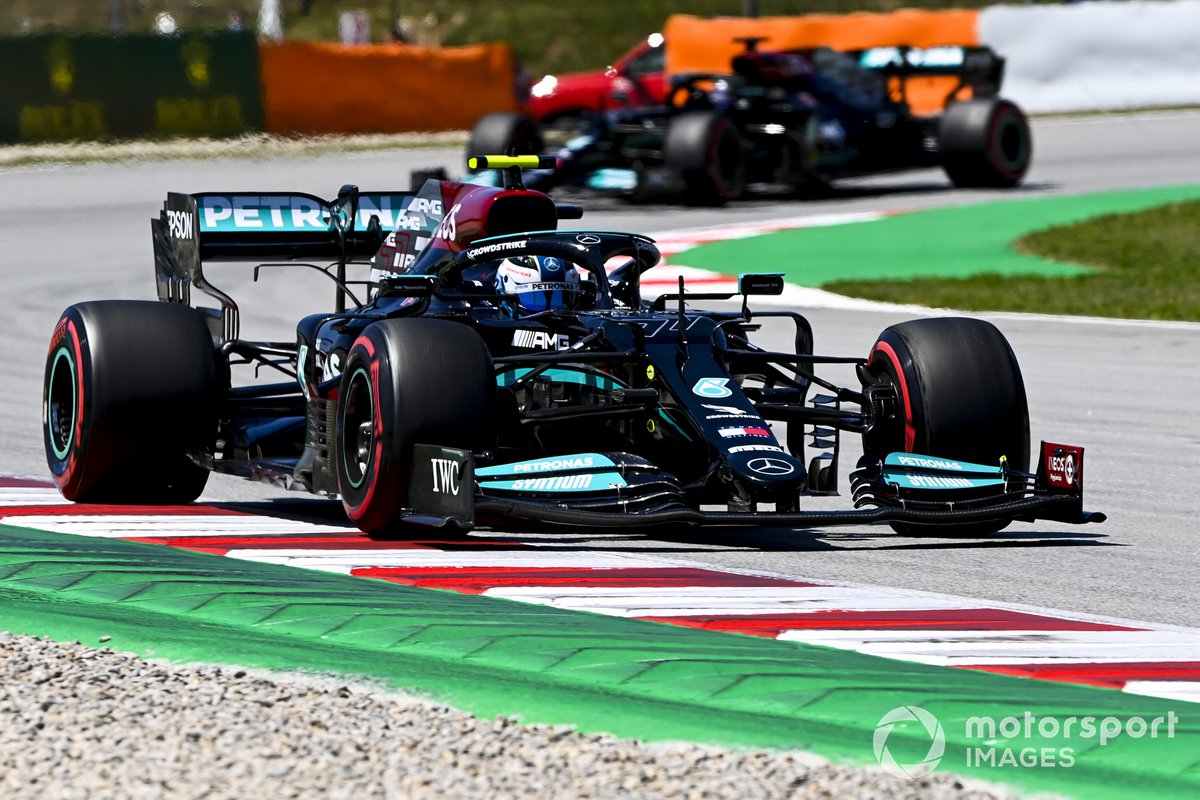 Verstappen said that despite the compact pack behind the top three, Red Bull "could have easily qualified on [the mediums]" but felt it did not "think it was necessary to do so".

Verstappen also explained why he had choosen to overtake several cars on his final out-lap in Q3, which he did not feel had any impact in him failing to set a faster time on his final run in qualifying – a development that also happened to Hamilton and Bottas.

He said: "I just didn't want to be in the back of the train.

"Because I saw when I left the garage that there were seven cars in front of me, and I know of course through experience that you go to Turn 10 and suddenly you almost have to stop, so I didn't want that.

"So, I just passed them and my tyre temps were still fine when I started my [final] lap. I just didn't want to get into a mess where people want to overtake you into the last two corners or whatever."