© 2021 Motorsport Network. All rights reserved.
TV Tickets Fashion Giorgio Piola Jobs
Previous / How Hulkenberg went from "instrumental" to out at Renault Next / Albon "floated" through 2019 rise to Formula 1 and up to Red Bull
Formula 1 News

Mercedes driver Valtteri Bottas had lost love for F1 before 2019

Valtteri Bottas suspects he would have lost his Mercedes Formula 1 drive with a repeat of 2018, but instead has rediscovered the love of racing that he lost last year

Bottas failed to win a grand prix in 2018 as team-mate Lewis Hamilton swept to the title, but put up a stronger fight this season and led the points early on in a year he won four races.

Mercedes spent the summer deliberating between the Finn and Esteban Ocon, who has since signed for Renault after Mercedes decided to continue with Bottas for 2020.

Bottas told Autosport that his improved form this year, which included a career-best second place in the championship, was "very important" for his career and his mental health.

"It's so important for me and also for my general well-being.

"I've had much more fun between the races now, and kind of fell in love with the sport, which I maybe lost a little bit towards the end of last year.

"I'm really enjoying the driving and it's such an important season for me.

"Now I can happily say again I have many, many years of me, and hopefully still with that same development."

Bottas finished on the podium at 15 of the 21 races this year, a tally that would likely have been higher but for a crash in Germany, an error in Hungary and an engine failure in Brazil that also affected the next race in Abu Dhabi. 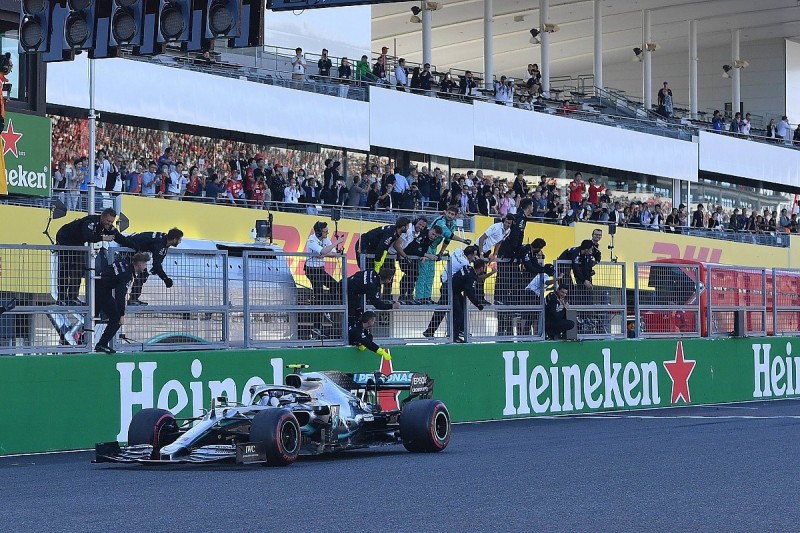 That tally includes two victories in the second half of the season, compared to a dismal end to 2018 in which he finished fifth in the final four grands prix.

"I'm definitely in a very different mindset compared to last year," he admitted.

"I was counting down the days that the season will be done, and that I can find a way to get myself back together and start fresh from zero again.

"The last month of last season, that felt like a long, long time."

Bottas's efforts to come back stronger in 2019 led to comments about 'Bottas 2.0' when the season started in Australia, especially as he dominated the grand prix.

Although his engine failure disguised results in Brazil and Abu Dhabi, Bottas said he believes his strong form at the end of this season will aid his preparation for next year as well.

"It's nicer, and an easier way mentally to start the [next] season," he said.

"I feel it's important to have good results, not only in the last few races.

"It's not 100% necessary, because I know that even after a bad season, you can start a new season strong.

"But it is just nicer, and also for the team to know that I can perform for the whole year, on every single race track, and then they know that I'm definitely upward for 2020."

How Hulkenberg went from "instrumental" to out at Renault