The new-for-2016 rubber is the softest in Pirelli's range, and ideally suited to a street circuit such as Monaco, with the tyre to also be used for the following race in Canada.

For F1's blue-riband event, Mercedes drivers Lewis Hamilton and Nico Rosberg - who has won the last three races in Monaco - have each opted for 10 sets of ultra-softs, with just two super-softs and one soft.

Red Bull duo Daniel Ricciardo and Max Verstappen, now the youngest winner of a race in F1 history following his triumph in Spain on Sunday, have also chosen the same configuration, along with Renault's Kevin Magnussen.

Magnussen's team-mate Jolyon Palmer has opted for one additional set of super-softs and will have three at his disposal, along with nine ultra-softs and one soft.

There are considerable discrepancies in choices throughout the field, with Ferrari pair Sebastian Vettel and Kimi Raikkonen going for nine sets of ultra-soft, and two apiece of super-softs and softs.

Williams, Force India, Toro Rosso and McLaren will be using seven sets of ultra-softs, with various configurations between them of super-softs and softs.

At the other end of the scale to Mercedes and Red Bull is Manor as Pascal Wehrlein and Rio Haryanto have only six sets of ultra-softs, along with five super-soft and two soft. 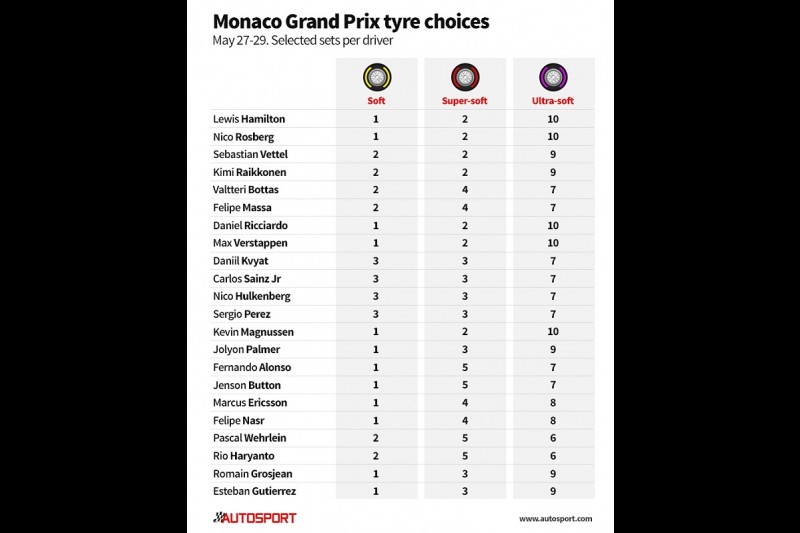