Mercedes and Ferrari have chosen differing tyre strategies for the Spanish Grand Prix, with the latter opting for more of Formula 1's soft compound

Ferrari has selected eight sets of the compound, compared to Mercedes' seven, as the yellow-walled tyre is used at Barcelona for the first time since 2012.

As has been the case in every other race this season, Haas has leant towards the softer compounds and is the only team other than Ferrari to choose eight sets of the softs

For the first time this season, the hard tyre will be available, with Mercedes, Ferrari and Williams drivers taking just one set each of the rubber.

However, no team has chosen more than two sets of the hard compound, with all favouring the mediums or softs.

While Mercedes, Ferrari, Williams, Red Bull, Force India, McLaren, Sauber and Manor drivers have made identical choices there is divergence elsewhere within teams.

Jolyon Palmer has chosen one more set of the mediums, while Renault team-mate Kevin Magnussen has favoured an extra set of hards.

Toro Rosso's Carlos Sainz Jr selected one more set of hards compared to Max Verstappen with the latter going for another set of mediums.

At Haas, Romain Grosjean has chosen the fewest sets of mediums - three - of all drivers while his team-mate Esteban Gutierrez has taken four. 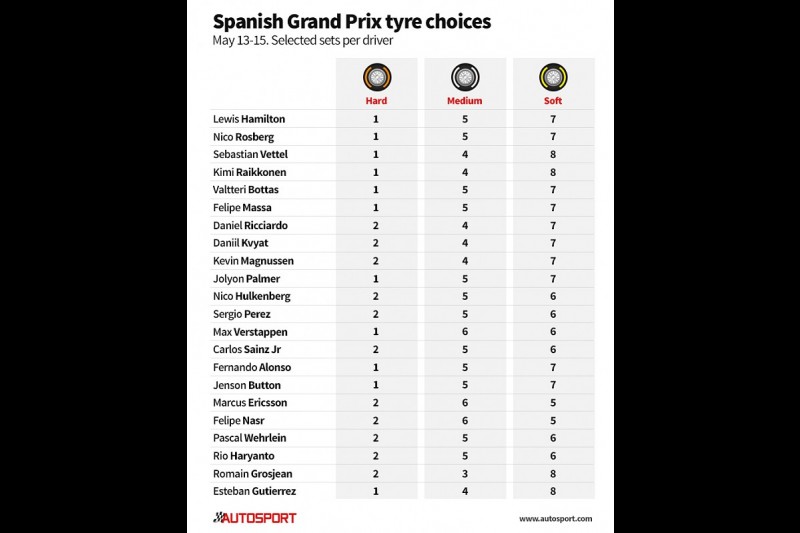