After the first safety car, leader Vettel slowed the field down and waited until the last possible moment to accelerate in an attempt to minimise the run to the first corner and prevent others benefiting from his tow.

Hamilton, who was immediately behind him, made his unhappiness at Vettel slowing and accelerating clear on the radio.

Race control looked at the incident, but it was deemed that the same sort of behaviour was happening up and down the field so no action was taken.

Hamilton believes what Vettel did was wrong and suggested he might talk to F1 race director Charlie Whiting about it.

"The rules are: when the safety car goes, you are not allowed to start, stop, start, stop," said Hamilton.

"Every restart I've done, particularly the four that I did last year, I didn't do that, and I abided by that.

"In Australia, Sebastian accelerated and then braked, I nearly went up the back end of him. And [in Baku] he did it maybe four times.

"I suppose I need to speak to Charlie, because I don't fully understand. As far as I'm aware, Charlie passed it on to the stewards and the stewards didn't do anything about it. 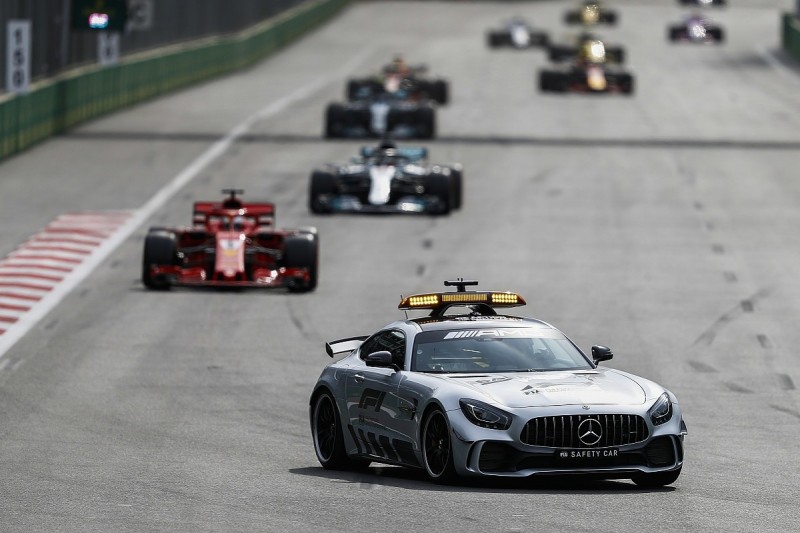 Whiting was adamant that Vettel had done nothing out of the ordinary.

"I think he controlled it very well," said Whiting. "It's up to the leading driver to say when we go, unlike some other series that have what they call an acceleration zone.

"Once it goes green, which we had, the safety car comes into the pits, all the light panels go green, then it's up to the leader to decide when he's going to go.

"This is a very tricky place, because they catch the safety car very quickly if they go too early - we saw that in F2 the year before last.

"There was a little bit of a complaint from Lewis that [Vettel] was not going at a constant rate, but if you look down the field, there are quite a few places where that happens.

"To expect them all to go at one speed just doesn't seem to happen.

"So as long as no one does anything that's obviously dangerous, then we're happy with what happened and I think he did control it rather well."