Vettel would have been in prime position to take the victory at Bahrain after his Ferrari team-mate Charles Leclerc suffered an engine problem while leading, but his spin while battling Hamilton aided the Mercedes driver's eventual win.

The four-time world champion made a series of mistakes in 2018 in his title fight against Hamilton, despite Ferrari holding a car advantage at points during the season.

Hamilton said it was wrong to assume Vettel would be feeling the heat from team-mate Leclerc after the new Ferrari driver's deeply impressive Bahrain drive.

"It's not that it plays on your mind, it happens to all of us," said Hamilton.

"Just because you're a four-time champion doesn't mean you're not going to have off-weekends. It's more cumulative.

"If you look at Vettel's career he's had stunning performances that far more outweigh the weaker races, and when he's spun, for example, they are minuscule on the status that he's accumulated and created.

"There are always times where you happen to just not get the right car set-up.

"You guys don't get to see all these little things that we're doing, and it just doesn't happen to work that weekend. And the differences are so small, and yet they look so big.

"I don't know why their car was so different in pace, but I remember, looking back on me and Nico [Rosberg], we would be in Barcelona, we were quick in testing, and then there were massive differences in the car in the race.

"You're literally just driving with your hands behind your back, and you've got no grip. Then another race, it's the other way.

"I don't know why it happens, but today it was one of those for him. But he's a world champion and a great athlete. He will recover and keep pushing."

Hamilton added that he could not explain the cause of Vettel's spin in the Bahrain GP.

"We touched in Monza [last year]," said Hamilton. "I think he was behind and maybe lost aero or whatever, and understeered into me and spun. That was an unfortunate one.

"I would say there's too few of them to really look too much into it.

"I looked at the [Bahrain] replay, and we didn't touch, which was a good thing.

"It was really windy there, so I have no idea why that happened for him." 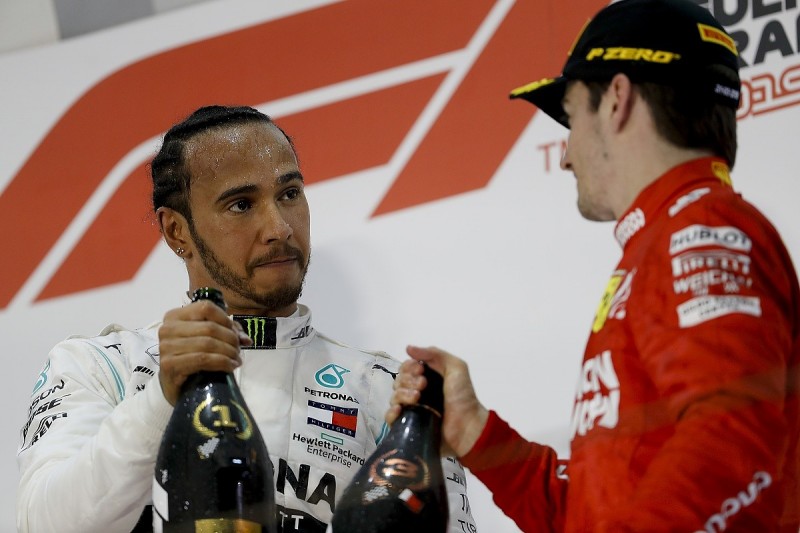 Hamilton was able to breeze past Leclerc for victory after his engine problem caused the Ferrari driver to suffer a dramatic loss of power.

It means that Hamilton has yet to duel Leclerc in wheel-to-wheel battle.

"I think every time you come across a new driver that you've had very little experience with, you approach it with caution," said Hamilton.

"I've not had any time on track with him to assess him. He looks like a very, very stable, fair and balanced driver as far as I can tell. But through the season you'll see.

"I approach it currently the same as I approach Sebastian.

"At the moment I've not had a wheel-to-wheel battle with him [Leclerc]. But I will discover that at some stage, I'm sure.

"Hopefully we will get some wheel-to-wheel battles through the year."