The Grove-based team scored points with both cars in nine of the opening 12 races, going on to secure third place in the constructors' championship for the second successive year at the penultimate race in Brazil.

The relative security of the position allowed Williams to turn its attention to 2016 early, having developed until the final race last term.

In Abu Dhabi, Felipe Massa, who was in contention for victory at the venue 12 months ago, was eighth while Valtteri Bottas failed to score in 13th, having lost time colliding with Jenson Button in the pitlane.

"The last few events we haven't gone as well as we would have liked," said Smedley.

"We stopped development on this car quite a long time ago having projected we would have a comfortable third position in the championship and second wasn't going to be possible.

"So naturally what we're seeing is due to the fact we haven't developed the car in such a long time.

"The end of the season has been slightly lacklustre compared to last year. But last year, we developed the car right up until the last moment.

However, Smedley conceded that regardless of its strategy, the team's performance in Abu Dhabi was not good enough and it must improve.

"It was a frustrating day," said Smedley. "It was a really poor result and it's just not where we want to be.

"We perhaps went forward a bit with respect to our qualifying performance but having to battle the Force India and the Red Bull and Ferrari being quite far in front was definitely not where we want to or expect to be."

Bottas described the performance at Yas Marina as a wake-up call that can motivate Williams to make steps forward this winter.

"Of course that was not the way we wanted to finish the season," he said.

"But in the end this could be good - it was a proper wake-up call that we really need to raise our game if we want to challenge for the wins next year.

"We all know the facts, we need to find big gains with the car during the winter, and there are operational things we need to do better." 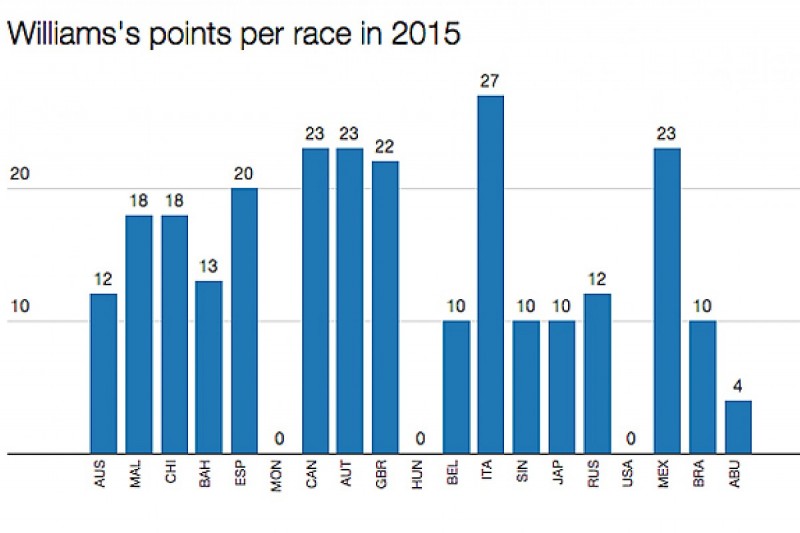 Rosberg a rival not a friend while in F1, says Mercedes' Hamilton