The stewards ruled that Raikkonen "made no attempt to significantly reduce his speed" when he passed yellow flags for Max Verstappen's stricken Red Bull on the Kemmel Straight early in the race.

Raikkonen said he did not lift but he did not think it was necessary as the car was behind the barrier.

"I knew there was a yellow flag but the car was at least halfway behind the barrier on the straight," he said.

"I didn't go faster but I didn't lift on the straight.

"In my view it was pointless to get penalised for that.

"I completely understand if he was by the side of the circuit, on the proper side and there is people working on it.

"But this is what happened and I would be surprised if everybody else lifted." 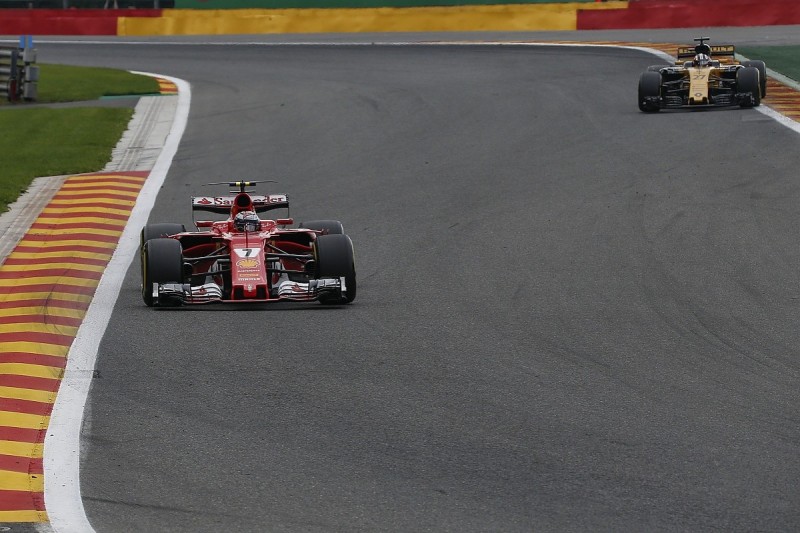 Raikkonen dropped from fourth to seventh after taking the penalty but was able to easily pass Esteban Ocon and then Nico Hulkenberg.

He then went three-abreast on the Kemmel Straight with Daniel Ricciardo and Valtteri Bottas after the safety car restart, with Ricciardo and Raikkonen passing Bottas for third and fourth respectively.

"On the restart I got a really good tow from two cars and then Ricciardo was on one side, Bottas was in the middle and I just had just enough speed to get next to Bottas, I managed to go on the inside," Raikkonen said.

"I got one car. After that I never really had the speed advantage over the Red Bull.

"They were surprisingly strong in race conditions compared to what they have been the whole weekend.

"They had good speed in the right places always and good lap times but at least I got one place back."