Magnussen, who was driving with his head tilted further forward than would normally be the case, handed over to test driver Pietro Fittipaldi for the last part of the day, having run only 62 laps.

The team expects to have a solution in place that will allow Magnussen to drive again on Thursday.

"I was sitting with my head pointing forwards, so I was struggling to see," he explained.

"The headrest was too far forward. Also when you sit like that and you brake, it's not easy. I couldn't drive like that anymore. That's something we need to fix.

"Obviously it's an easy fix, but we just don't have the parts, we don't have another headrest we can fit, so we need to get that sorted."

Team principal Gunther Steiner is confident that a solution will be reached this week.

"It was when we made the seat," said Steiner. "He didn't realise that it was actually pushing him forward so the seat is too far back and the headrest too far forward, and you cannot just modify it because then it is unsafe, and you cannot do that.

"So we'll get something done tonight and on Thursday he will again be comfortable in the car.

"If you do it for too long maybe you get some pain, and then he cannot drive for two days. 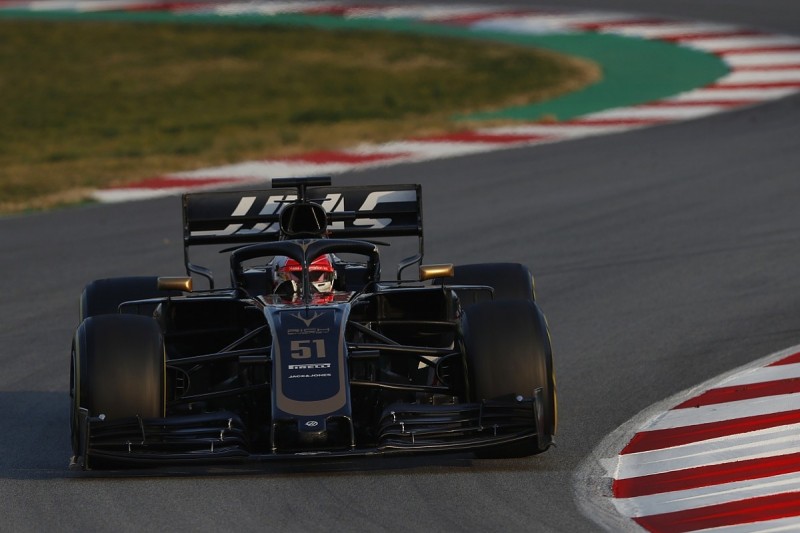 "So he said he would rather stop if you guys don't mind, and then we just decided to put Pietro in for the last hour so he can get prepared for tomorrow morning when he is running with the car installation - pedals and seat, everything."

The comfort problems aside Magnussen was pleased with progress as he set the third fastest time of the day.

"Good, I would say," he said when asked to summarise progress. "We had a few little issues, as is quite normal in winter testing, nothing major just stuff that needs to be sorted and looked at, and which is stopping us from running once in a while, but stuff which isn't a big worry or big issues.

"Apart from that a very good feeling in the car, and seems like it's handling well, good consistency and stability.

"The early impression is that it's feeling good, there's no big issues or inconsistency, it's nice to drive and predictable.

"Those are positive things when you jump in a new car, that you don't get in and feel uncomfortable, you get in and you feel at home.

"I'm sure it could be a lot worse than where we are."