Toro Rosso driver Albon arrived at Barcelona with no experience of an F1 car beyond a small amount of running at the team's shakedown last week.

He spun into the gravel exiting the long Turn 4 right-hander on his out-lap at the start of the day, 24 hours after Raikkonen dumped his Alfa Romeo in the Turn 5 gravel after exiting the pits.

"I didn't really want to think about it too much," Albon said. "Especially those first moments in the car.

"Kimi did it yesterday, so that kind of reassured me a little bit."

The Formula 2 race winner added: "It's quite funny because I've had that experience before, spinning on an out-lap. So [I thought] 'don't think about it too much'.

"As I said, it kind of reassured me that Kimi did it.

"But of course, when I span, it was a bit like a dog with the tail between the legs."

Several drivers were caught out on Monday morning by low track temperatures and rear tyre blanket temperatures being dropped to 80°C this year while fronts have stayed at 100°C.

Albon, who took over from team-mate Daniil Kvyat on Tuesday, explained that his mistake was not pushing hard enough through the first few corners.

"It's really tricky because it's so cold and you won't ever experience this kind of temperature on a normal race weekend," he said.

"'This is your first time in the car, you don't want to spin' - this is what's kind of in your head because you're only doing an installation lap.

"But that exact philosophy kind of hurt me, because I took it a bit easy through Turns 1, 2, 3, and by the time I reached Turn 4 the tyres had completely dropped off.

"It was almost like a bit of a cycle, and my own cautiousness created the spin." 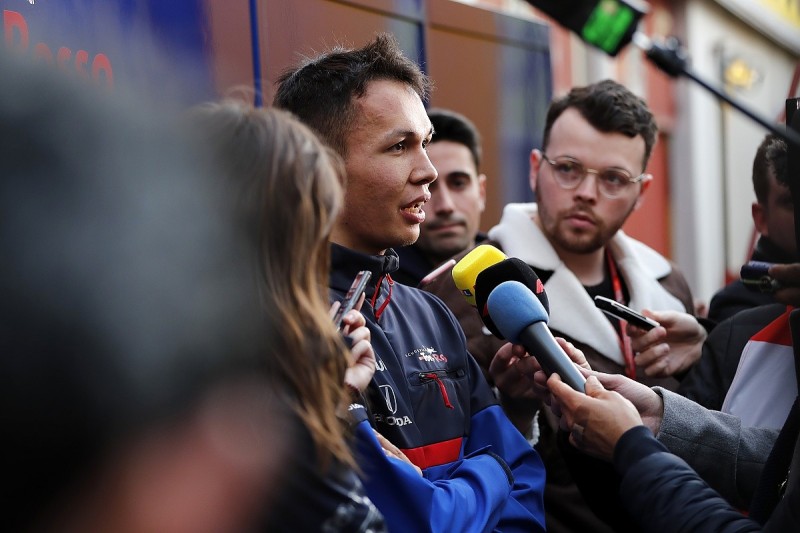 Despite the troubled start, Albon's first day of F1 testing ended with the fourth-fastest time and 132 laps on the board.

"It didn't scare me," he said. "The next out-lap I made sure to push a little bit more not to spin, which sounds a bit weird.

"But it was OK. As soon as I got that first lap out of the way there was more just about focusing on the job."

Albon's eventful official debut also included being waved out of the garage just as the Renault of Nico Hulkenberg was coming down the pitlane.

"Honestly you don't really see it," said Albon. "You get the call to come out the pits, and I looked in my mirrors and saw a big yellow car behind me.

Video: Who's in trouble in Formula 1 testing behind Ferrari?