While there were only 0.4 seconds between the two McLarens in a tightly contested midfield pack, Button suspects there is a major problem that needs to be found overnight.

"Fernando has got some slightly different bits on his car than I have, but even so, we should be more competitive on the long runs than we are," said Button.

"We're a long way off, there's something we need to look at - something's wrong rather than a set-up issue.

"Normally long runs are a forte of mine and it wasn't today.

"The problem is I can make the soft tyre last for one lap and that's it.

"The degradation is massive so it just feels that something isn't quite right on my car.

"There's got to be something that's not working, we'll be changing quite a lot of stuff for tomorrow." 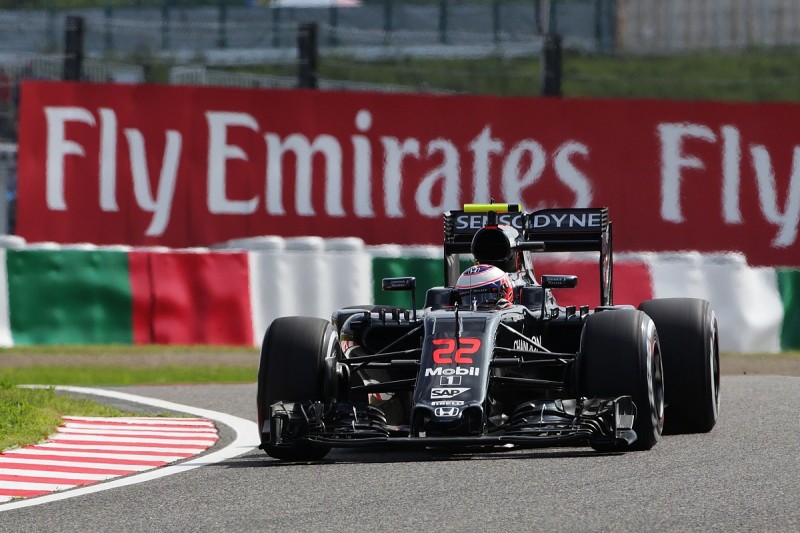 Button was less concerned about being so far down the order on the single-lap pace runs.

"One-lap pace wasn't too bad, we just didn't get a great lap," he said.

"It's very close from seventh back to where I am in 16th, that's about four tenths.

"So if you get a good lap together, which hopefully I will in qualifying, we could be popping into the top 10.

"Over one lap everything is to play for, it just wasn't a good lap from me, I had a lock of front [brake] locking.

"But it's only practice, tomorrow we can be more competitive and fight for the top 10."

Despite being much higher up the order than Button, Alonso was also not happy with his day.

"It has been tough, we are not yet happy with the set-up and we need to keep working tonight," said the Spaniard.

"We need to find some extra speed - we are only P8 and [Daniel] Ricciardo was not able to try the soft tyres so immediately we are P9.

"There are many things to answer so we just need to keep doing our best and trying to extract some more performance from the car.

"Not too fast this weekend for Jenson and me so we need to find something extra."

Alonso added that his spin in morning practice was most likely caused by "some issues with the aerodynamics of the rear wing".