After beating Hamilton by two tenths of a second in the first session at Suzuka, the polesitter for the last two races at this track then edged his Mercedes team-mate by just 0.072 seconds in practice two.

There was a minor scare for Rosberg 13 minutes into the session when he pulled out of his garage with wisps of smoke emerging from the back of his Mercedes.

As Rosberg then waited at the end of the pitlane to start off, the smoke became slightly thicker and billowed out for a few seconds, although there was little sign of any trouble thereafter.

Rosberg soon posted the fastest lap at that stage on a set of the medium-compound Pirelli tyres with a 1m33.758s, only to soon be beaten by 0.283s by Hamilton on the hard tyres.

Come the quicker laps on the soft-compound rubber, Rosberg set a 1m32.250s that was to remain unbeaten throughout the session.

Hamilton was quickest in the first sector soon after, but lost out in the second and third to miss out on top spot on the timesheet by a slender margin.

Ferrari's Kimi Raikkonen finished third quickest, just over three tenths of a second off the pace, but half a second up on team-mate Sebastian Vettel, with both on soft tyres.

In between the pair was Red Bull driver Max Verstappen, who like Vettel was almost eight tenths adrift of Rosberg's lead time. 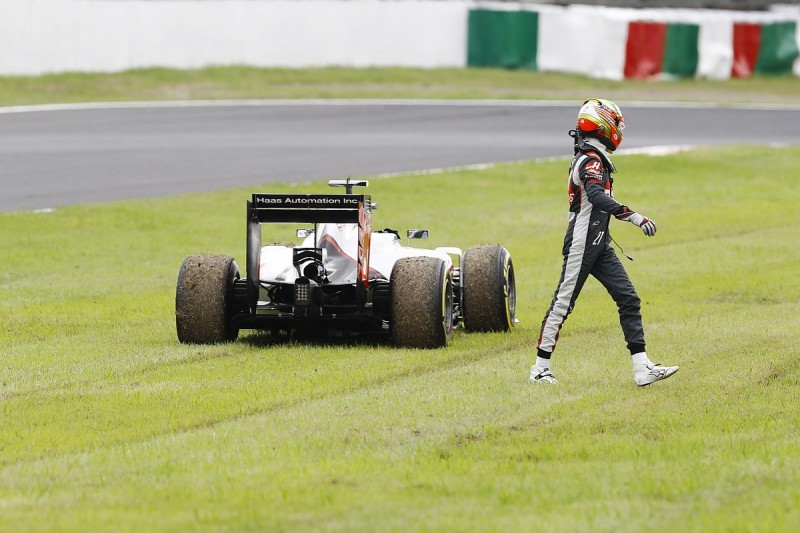 As for Verstappen's team-mate Daniel Ricciardo, winner last time out in Malaysia, the Australian was forced to abort his quick lap on soft tyres due to a virtual safety car period.

That was prompted by Esteban Gutierrez parking his Haas at the side of the track approaching Degner after a turbo issue.

It was the second problem of the day for Haas as Romain Grosjean had suffered yet another brake problem in practice one just days after his retirement in Malaysia when a brake disc exploded.

Ricciardo was left to finish 12th quickest, almost two seconds down, but with his time of 1m34.150s having come on the hard tyres while all in front did a quick lap on softs.

There was no repeat of the morning's crashes, but Daniil Kvyat was involved in a high-speed spin coming out of the final corner, avoiding damage as he managed to catch the Toro Rosso in a full 360-degree pirouette.