Bottas clocked a 1m21.406s on the super-soft compound tyres, 0.056 seconds ahead of Hamilton, with Sebastian Vettel just a tenth further back in third.

The track was green early on as the morning rain had washed away the fresh rubber put down in opening practice.

Hamilton led the way after the opening third of the session with Mercedes focusing on running the soft tyres initially.

When attention turned to qualifying simulations, Vettel went fastest with a 1m21.546s, which was fractionally slower than Hamilton's leading morning time.

Bottas then demoted Vettel and though Hamilton looked on course to usurp his team-mate, he lost time in the final sector and ended up second.

Kimi Raikkonen was fourth quickest, competing his quickest time on the second flying lap on the super-softs, as Ferrari provided more of a threat to Mercedes than it had earlier in the day.

Max Verstappen was the leading Red Bull in fifth, one second off the pace, with team-mate Daniel Ricciardo three tenths further back in sixth.

Both drivers face a tricky weekend as a raft of engine component changes means Ricciardo and Verstappen will receive grid penalties of 20 and 15-places respectively.

The McLarens of Stoffel Vandoorne and Fernando Alonso, who is set to start from the back after a 35-place grid penalty for engine component changes, showed an impressive turn of speed in seventh and eighth respectively, 1.5s off the pace.

Esteban Ocon and Felipe Massa, who aborted his first low-fuel run when he put two wheels on the gravel on the exit of the second chicane, completed the top 10.

Carlos Sainz Jr, who has a 10-place grid penalty after his Toro Rosso team changed the MGU-H, was 11th quickest. 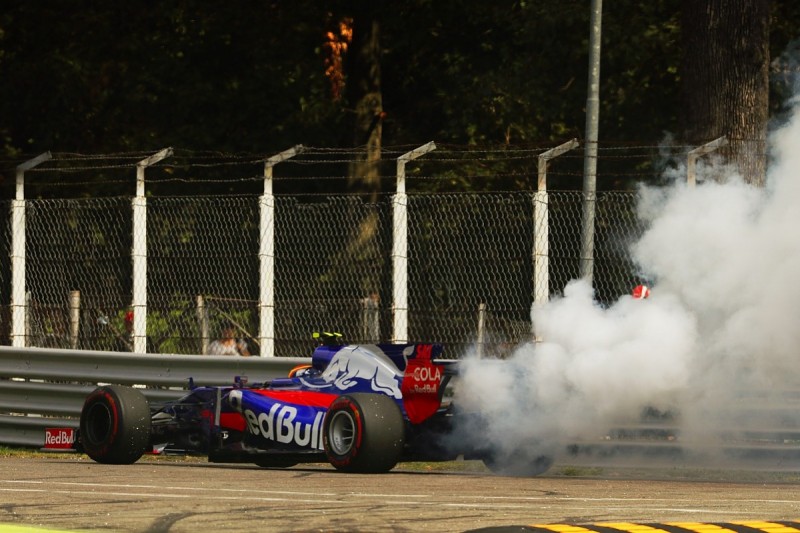 His session ended early when his Renault engine let go and he stopped after the second chicane.

His team-mate Daniil Kvyat, who was 18th quickest and set his best time on the softs, ended his session early when he was called back into the pits as his team found a problem with the car.

The Renaults of Nico Hulkenberg, who spent much of the latter part of the session in the garage, and Jolyon Palmer were evenly matched in 12th and 13th, with just under half a tenth separating them.

Lance Stroll recovered from a spin at the Ascari chicane to end the session 15th quickest, four tenths adrift of Williams team-mate Massa.

Haas duo Romain Grosjean and Kevin Magnussen were just over two seconds off the pace in 16th and 17th.

In the closing minutes of the session, Magnussen stopped at the Ascari chicane reporting "broken suspension", leading to the deployment of the virtual safety car.

Sebastian Vettel lacked confidence in his Ferrari in Monza practice