The Mercedes driver, running a revised low-downforce package after the team was disappointed with its form at Spa two weeks ago, was the last of the leading drivers to start setting flying laps.

He knocked Ferrari's Alonso from top spot by 0.298 seconds five minutes before the one-hour mark.

Alonso looked set to reclaim top spot three minutes later, setting the fastest times in both the first and second sector, only to run a little wide at the exit of the Parabolica, kicking up dust, and end up 35-thousandths of a second slower.

Hamilton's 13th lap suggested he would have been able to go quicker again even if Alonso improved, going fastest in both the first and second sectors before backing off in the final part of the lap and not improving his time.

The first half-hour of the session was predictably quiet, with only four drivers setting lap times and Sergio Perez heading Jenson Button at the top of the timesheets by over a second.

During this early running, Button's car developed a problem with the DRS not shutting as quickly as expected, triggering a stewards' investigation into unauthorised use of the device.

McLaren fixed the problem and the 2009 world champion later returned to the track to end up seventh fastest.

With all drivers running the orange-banded Pirelli hard compound rubber, Red Bull's Sebastian Vettel knocked Perez out of top spot just before the halfway point of the 90-minute session.

He was eventually relegated to third by Hamilton, Alonso and Nico Rosberg, the second Mercedes driver improving to third relatively late in the session.

Kimi Raikkonen ended the session fifth fastest driving the new long-wheelbase specification Lotus E21, believed to be around 100mm longer than the previous car, for the first time.

Team-mate Romain Grosjean drove the regular version of the car to allow the team to back-to-back the two. He ended the morning 12th. 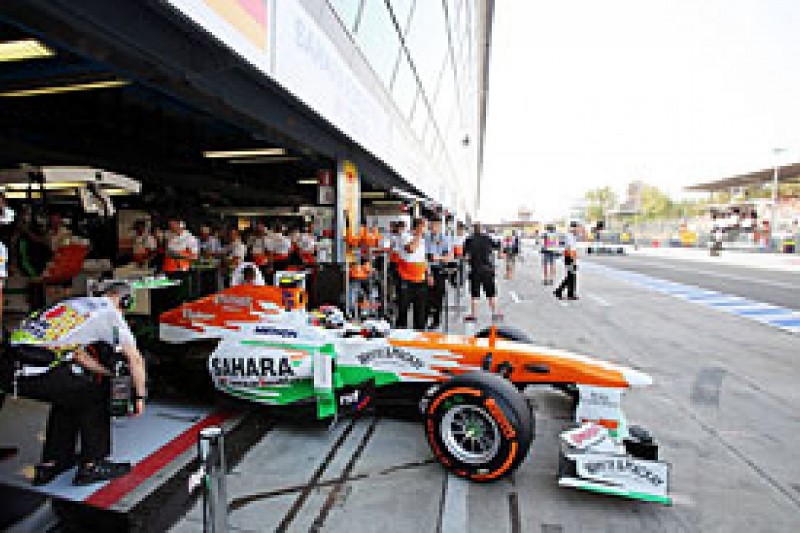 Force India's new third driver, James Calado, made his grand prix session debut after previously testing for the Silverstone squad. He completed 24 laps, ending up within half-a-second of team-mate Paul di Resta's pace and will now turn his attention to GP2 action for the rest of the weekend.

Both Caterham and Marussia also ran their reserve drivers. Caterham's Heikki Kovalainen was the faster of the two, while Rodolfo Gonzalez was the first driver to complete a flying lap to top the times after 21 minutes but ended the session slowest.

As is typical for Monza, numerous drivers were forced to short-cut chicanes after a mistake, with Williams driver Pastor Maldonado having the most dramatic moment when he bounced through the gravel at Ascari.

The top 14 cars were all within nine tenths of a second of each other.