Many F1 drivers take key personnel with them when moving teams, with examples in recent years including Andrea Stella following Fernando Alonso from Ferrari to McLaren, Ayao Komatsu moving to Haas from Lotus with Romain Grosjean and Rob Smedley joining Williams from Ferrari with Felipe Massa.

When Bottas received his late call-up to Mercedes for 2017, he deliberately elected to work with Rosberg's old crew of race engineer Tony Ross - who had himself moved from Williams to Mercedes with Rosberg - and performance engineer Marcus Dudley.

"It was something I decided from the very beginning," Bottas told Autosport.

"There is a lot I can learn from them and they will help me to learn how the team works.

"Every human is different and you work differently with everyone.

"The team has a different kind of approach to meetings and new systems and new terms.

"So I had to kind of adapt into how this team works.

"That was the one reason why I did not really push for anyone from Williams to come with me.

"I wanted to start with the experienced people here, because they know this team the best."

While keen to fit into Mercedes' methods, Bottas added that he quickly felt confident to speak his mind there.

"If I feel something is not quite right, I always keep my honest opinion. The team appreciates it.

"For sure Lewis [Hamilton] has much more experience with this team and with this people and the car, but that's the only thing I can do, to give always my honest opinion about everything and whatever can be improved from what I think." 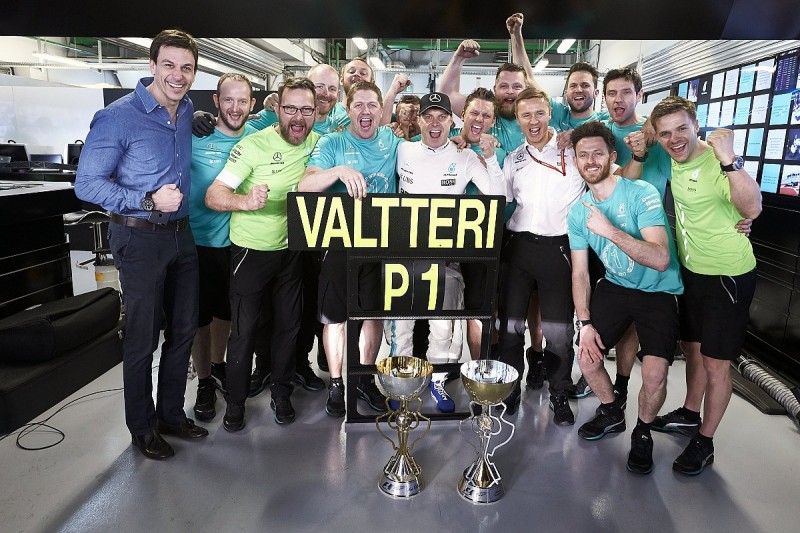 Bottas said the difference in atmosphere at a team accustomed to championship success compared to an underdog such as Williams was striking.

"This team knows basically how to win," he said.

"It is so hungry for the wins and for success, and everyone looks very upbeat [when winning] and disappointed when it's not a good day.

"It's very tricky in a midfield team or a team behind the bigger teams to have that kind of mentality.

"If you have a good result, you might be fourth or maybe third sometimes. That's a success.

"Also obviously Mercedes has big resources and many more people.

"That means you can focus 100% on different projects at the same time.

"In the smaller team you can compromise, you can focus on something for a while and then something else later.

"But when it's more people with more resources, you can focus on many different things at the same time, and that makes car development quicker and everything works more seamlessly."