There's been a great deal made about Mercedes' apparent Formula 1 straightline speed advantage when compared with its closest rival Red Bull.

Described as a device to help lower the W12 at high speed, it's worth pointing out that the discussion actually centred on a well known suspension 'trick' that's been in operation in Formula 1 for a number of years, rather than a new device that's suddenly appeared on the car as it might have come across.

Furthermore, it's not just Mercedes that utilises this trick, as most of the grid uses this clever manipulation of the rear suspension in one form or another to lower the car in a non-linear way in order to 'stall' the floor and diffuser and reduce downforce and drag for a straightline speed boost.

That said, it's not something that's going to have the same effect for each team, given the variation in aerodynamic concepts up and down the grid, nor will it have the same benefit at every circuit, as the teams will have specific downforce packages for high, medium and low downforce circuits.

This means that while the non-linear movement of the rear suspension on the W12 seemed more obvious in Turkey, this was due to the team being able to run the car in a more specific manner, so as not to have the downforce reduced for the high-speed corners but 'stalling' the floor, diffuser and rear wing on the straights.

Given that the Circuit of the Americas has a very different high-speed layout to Istanbul Park, the same straightline speed boost couldn't be achieved by Mercedes, just as had been the case at several other races this season, and led to the top speed gap between the German squad and Red Bull being much narrower.

While Red Bull's concern regarding this straightline speed advantage has grown over the last few races, the team was also worried about the hidden consequences of Mercedes being able to run a higher downforce set-up and take the advantage this offers in the corners before shedding the additional drag it would ordinarily create on the straights.

The more interesting narrative of this story is that whilst Mercedes has been able to exploit this suspension trick for a number of years, it appears that the new regulations handicapped its use in the opening phase of the season.

The introduction of an upgrade package at the British Grand Prix appears to have been the catalyst for its renewed top speed advantage though. 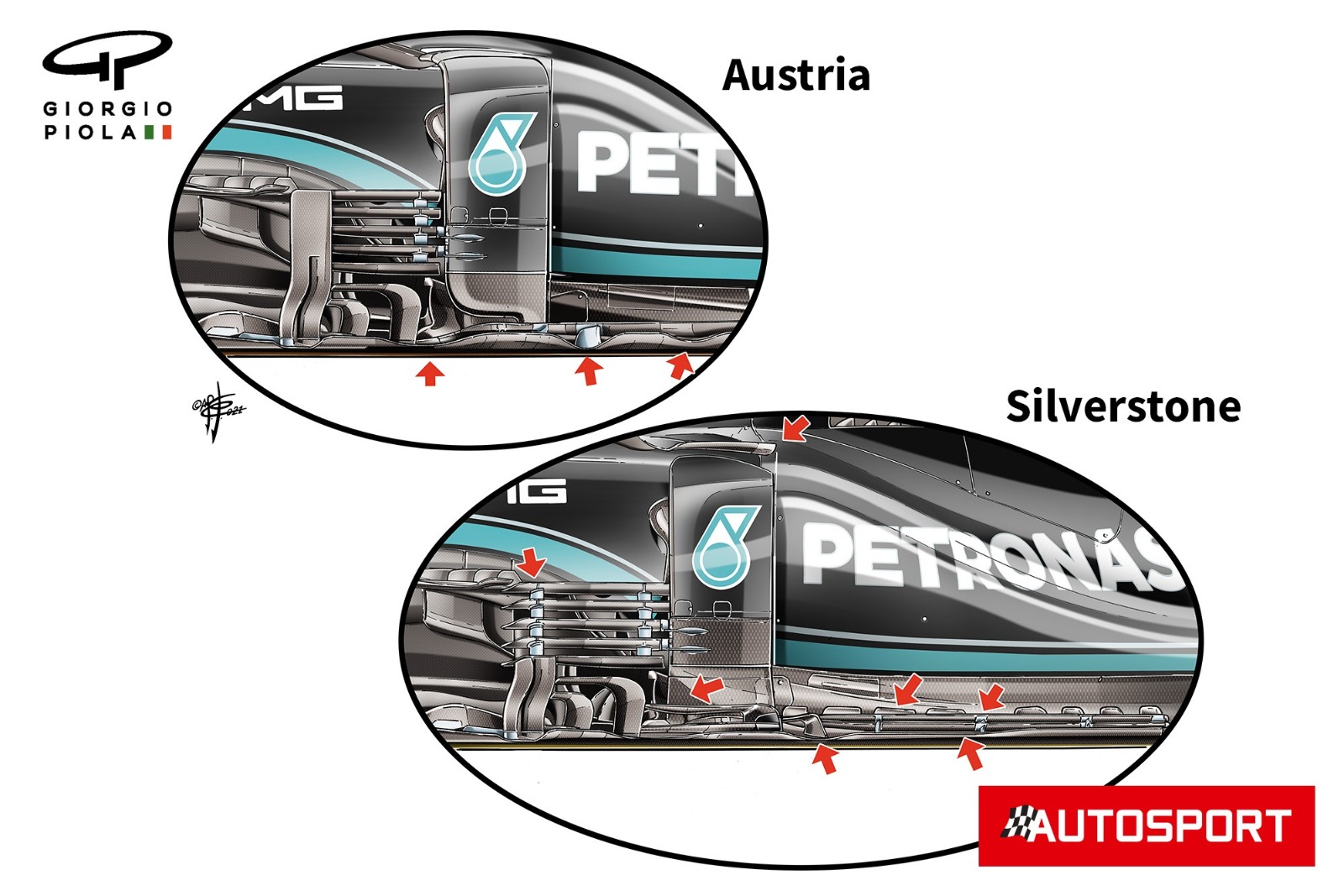 The aerodynamic update (pictured above, described below), which centred on the car's midriff, appears to have made the car less of a handful and easier for the team to find the performance sweet spot of the car over a range of conditions, thus making it easier to tune this suspension 'trick' at different circuits too.

1. The forward vertical deflector was cut down, which in-turn allowed for the venetian blind-like slats to be extended forward

2. The main vertical deflector was also detached from the sidepod's leading edge wing, removing the arched section that had previously framed the sidepod's shoulder.

3-4. The 'wave' floor section which had been an imposing feature on the W12 since the start of the season was also tuned.

5. The single, more prominent floor scroll, was replaced by a pair of scrolls instead.

6-7. Eight angled fins were added, in order to course correct the airflow that moves around the sidepod.

Prior to this the team had largely been forced to trim its downforce levels not only to cater for the prevailing conditions and track characteristics but also as a means of keeping Red Bull within arms reach.

Other factors have had a bearing on the relative success of this non-linear suspension trick too, such as the new load and deflection test guidelines set out by the FIA for the rear wing introduced at the French Grand Prix.

This reduced the effectiveness of the flexi-wings that teams had been using as another method to boost their straightline speed performance. With the boundaries reset it upset the competitive order a little and required the teams to rethink their downforce levels for the given circuits.

Although the rear suspension trick in action created an interesting narrative, it's worth remembering that very little in Formula 1 is ever really new, with the same fundamental ideas re-appropriated in order to circumvent regulations that would otherwise erode their advantage.

After all, the current solution might have been used in this guise for several seasons to varying degrees of success, but only after the teams have found ways of retaining the effect following the FIA altering the regulations or banning FRIC which also sought to create a similar effect.

It's a trick that predates the modern interpretation on suspension too though, with Adrian Newey even citing the use of the same trick when Williams had active suspension back in the 90's.

"The other thing I noticed from the wind tunnel results was that at very low ride-heights the resulting stall of the diffuser reduced the drag of the car.

"So, we added a button to the steering wheel which, when pressed and held down, dropped the rear ride-height. The drivers used this where they were power, rather than grip-limited (generally in the straights). Effectively it was an early version of DRS".

Why Stroll believes his “de-risked” Aston masterplan is feasible