Main Photos Illustrations
Previous / Alpine: We need to “do better” to beat AlphaTauri to fifth Next / Staging an F1 race is like a Coldplay concert says Mexican GP promoter
Formula 1 News

Aerodynamic output is a key factor in the design of most components on a Formula 1 car due to the significant performance advantages on offer.

The modern brake duct has not escaped such a consideration, having been optimised to improve the performance of the brakes and tyres whilst also being used to influence the aerodynamic wake profile of the tyre.

Teams are well aware that this wake can be damaging to the aerodynamic performance at the rear of the car if left unchecked.

The advent of the brake drum, or 'cake tin' as it is often affectionately referred to, came in the early 2000s and provided a thermal enclosure for the brake assembly in order that the airflow wasn't overly influenced by the wheel rim.

Designs were and still are quite varied, with each team looking to achieve their own objectives, rationing performance between temperature control and aerodynamic influence.

Satisfied that temperatures had been brought into a more controllable window, the designers began to take advantage of further improvements made by the brake manufacturers.

This included drilled carbon discs and lightweight calipers becoming more and more commonplace throughout the years, as both the teams and manufacturers have worked together to find more performance.

Design and manufacturing improvements over the course of a 10-year span saw the number of drill holes that run through the centre of the disc increase from 100 to 1200. Now they are somewhere in excess of 1500 in total. 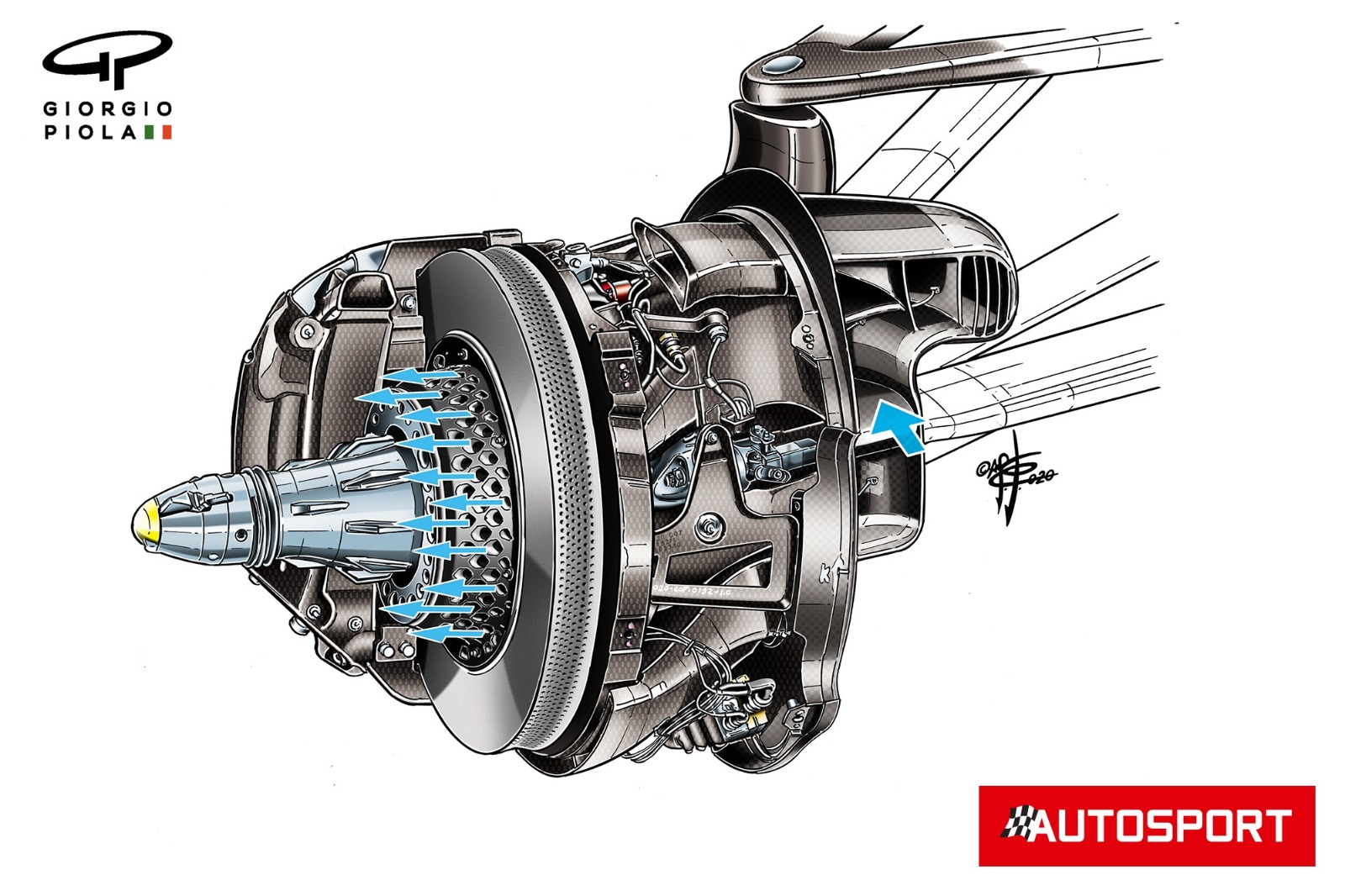 These drill holes help to dissipate the heat generated under braking, which is critical when we consider they can be operating at temperatures of up to 1000°C.

This is another area where the teams and manufacturers have worked diligently to find more performance.

However, Mercedes has taken things a step further with a collection of diamond-shaped outlets embedded in the face of the conical section of their brake bell to help with cooling and the aerodynamic throughput of the brake duct. 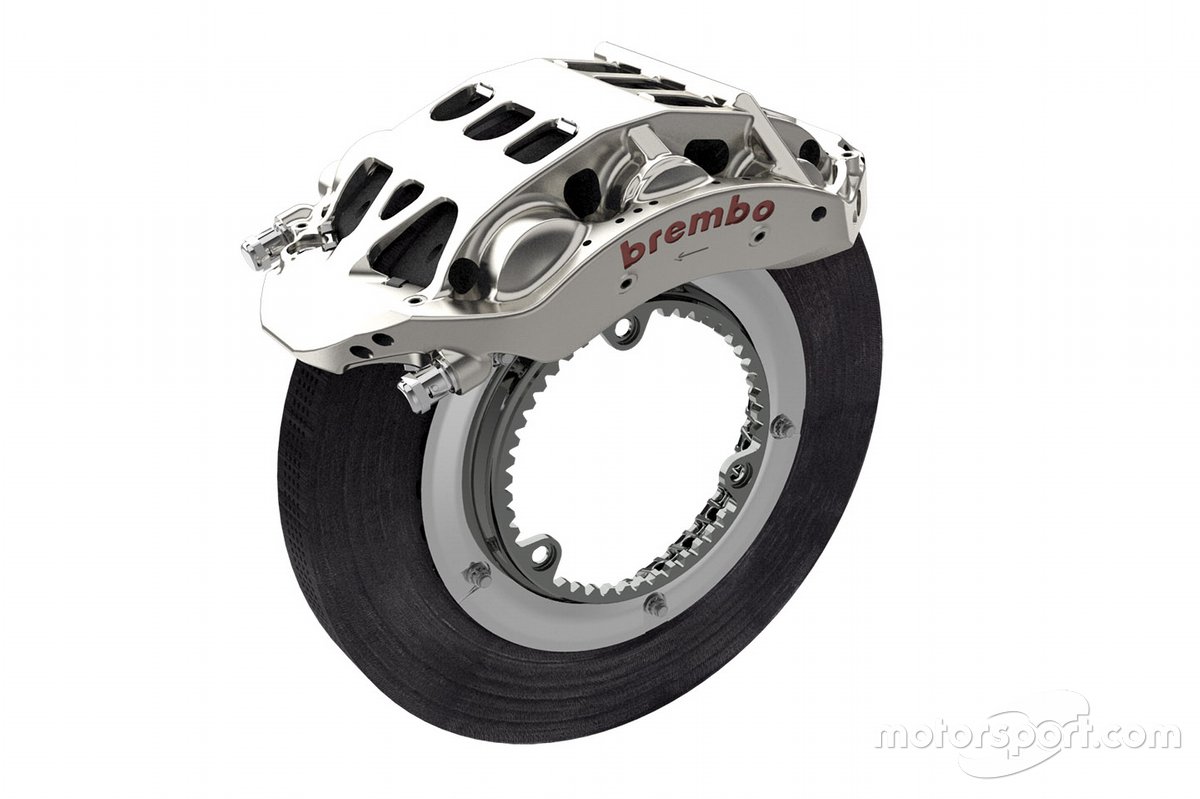 The brake calipers themselves weigh around 2kg, so much less than their road car equivalent.

However, they also been given the F1 treatment when it comes to direct cooling too. As you can see, the caliper has specific cooling windows housed within the body ready to receive the airflow collected at the inlet and delivered to it directly by the pipework that's installed within the brake duct assembly.

The location of the caliper is still a decision that's taken by each team too, with Red Bull housing its calipers in the 4-5 o'clock position, whilst Mercedes prefer the more upright 3 o'clock position. This has a bearing on the route that the cooling pipework must take too. 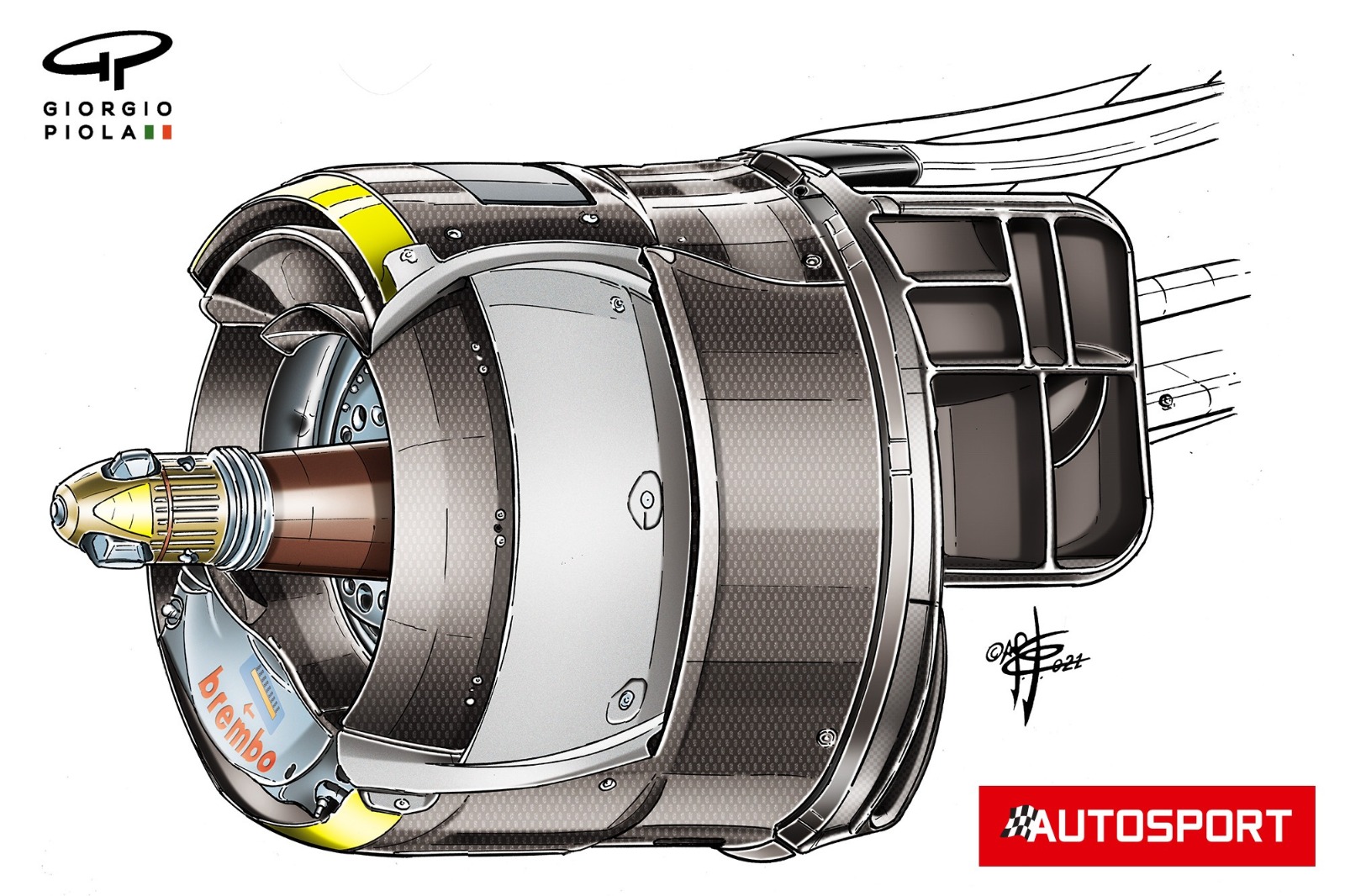 Both have a bypass pipe towards the top of the assembly which has no brake cooling purpose at all.

Instead it offers a route for some of the airflow captured by the inlet to take, in order that it influences the turbulence created as the wheel assembly and tyre turn.

This is assisted further by the other airflow structures that spill out of the wheel face, including the one created by the crossover channel which is carved into the front face of the drum and opens up the space between the drum and the wheel rim to use its influence on the airflow.

While both teams have these, they have different design profiles given the placement of their brake calipers and the need to marry up with the other flow regimes being created.

Red Bull also coats its with a reflective surface in order that it helps reduce heat transfer from the work being done by the brakes within.

The window on the top of the RB16B's drum is open in the upper image, showing the different options that teams have at their disposal depending on the circuit they're visiting and the level of heat rejection required. 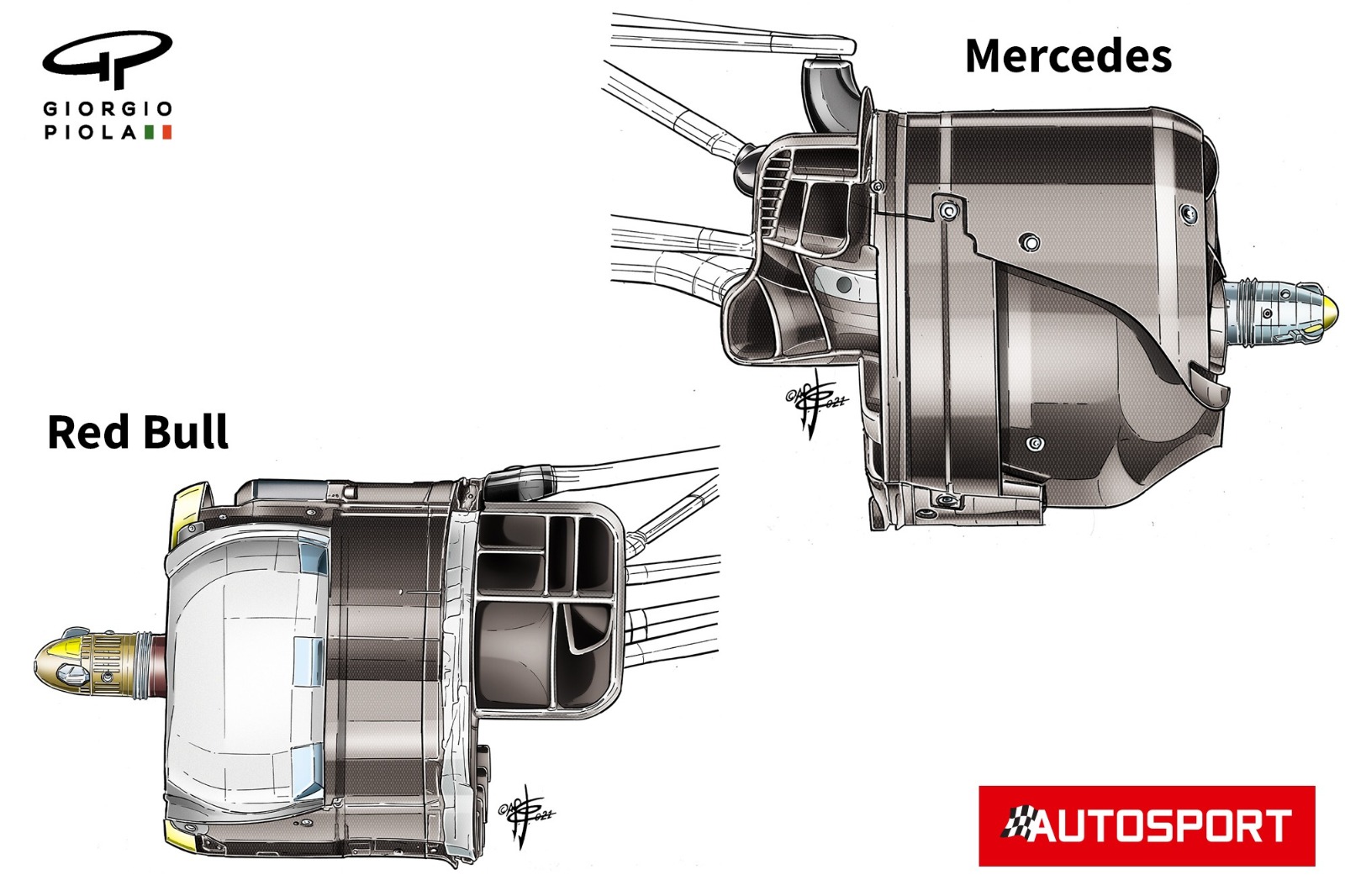 Both Mercedes and Red Bull also have a different thought process when it comes to collecting the airflow too, as Red Bull started the season with a wider ear-shaped inlet scoop, which it has more recently squared-off.

Meanwhile, Mercedes has an elongated inlet scoop that's been inverted when compared with its 2020 effort. It has a smaller ancillary inlet hidden amongst the winglets mounted in the lower half of the brake duct's fence.

The overall cross section is probably very similar but, with Mercedes, it's also worth noting that it is capturing some of its airflow in the gap between the end fence and the tyre's sidewall too.

In the following animation we can see how Ferrari has created multiple airflow channels by stacking the elements of the brake drum on top of one another.

The first crossover channel absorbs some of the heat rejected by the brakes and filters it out through the wheel face, whilst the second piece of the drum's bodywork has an open channel that exposes the airflow to the wheel rim as it rotates around the assembly.

This is collected on the outer perimeter by a looped section of the drum that guides the airflow out through the wheel face as the flow structures combine to help reduce the turbulence created by the wheel and tyre.

Alpine: We need to “do better” to beat AlphaTauri to fifth