The Montreal circuit features four braking zones defined as 'hard' by brake supplier Brembo - Turns 6, 8, 10 and 13, and further three braking events - two medium and one light - while almost a quarter of the lap time is spent slowing the car.

Although mechanically the operation of F1 brakes remains broadly the same, the systems have evolved significantly over the past 20 years to deal with the challenge of circuits such as Montreal. 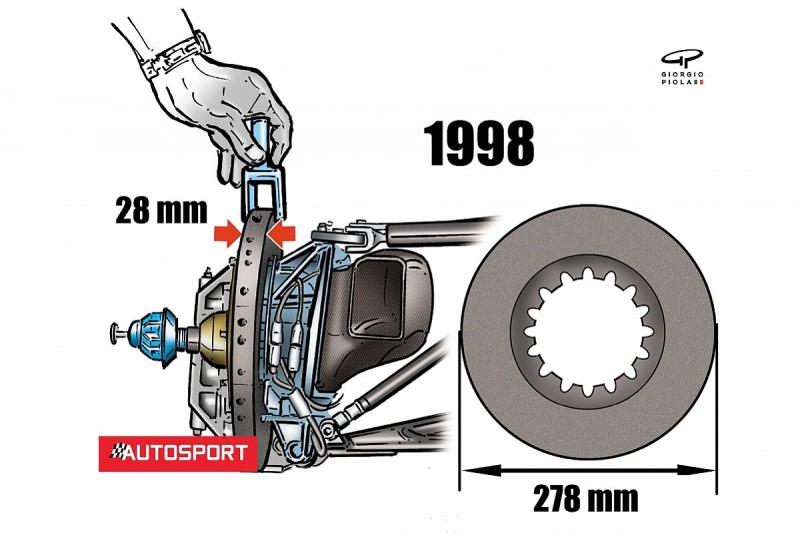 In 1998, the FIA introduced rules restricting the brake system to calipers with a maximum of six pistons and no more than two pads.

The maximum brake disc diameter was set at 278mm, and maximum thickness at 28mm.

Last season, because of the higher speeds produced by the 2017 aero rules, the widening of the cars and, in particular, the wider tyres that increased mechanical grip under the new regulations, the permissible disc thickness was increased to 32mm.

Major progress has been made in brake disc material and Brembo, which supplies multiple F1 teams including Ferrari, has been among those at the forefront of development.

In 2013, Brembo introduced the new CER material to replace the old CCR type. This offered gains in terms of performance and wear and reduced previous maximum wear of 4-5mm on the hardest tracks to around 1mm. 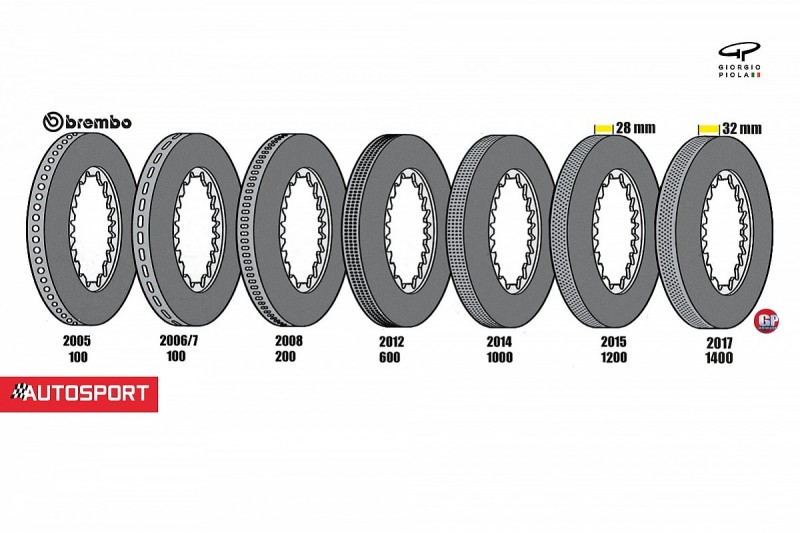 The ventilation has also improved, with the number of holes increasing over the years, from a 100-hole disc to 1200 and then to the current maximum 1400 for the 32mm discs. 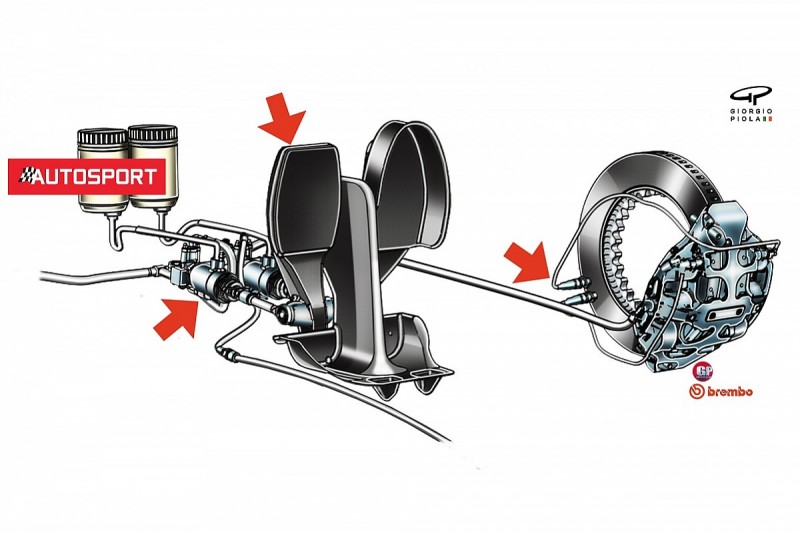 With the introduction of the current Energy Recovery Systems technology in 2014, F1 adopted brake-by-wire technology for the rear brakes thanks to the demands of harvesting energy from them.

F1 cars have separate brake cylinders for the conventional front axle brakes and the brake-by-wire system at the rear to allow the brake bias to be adjusted. 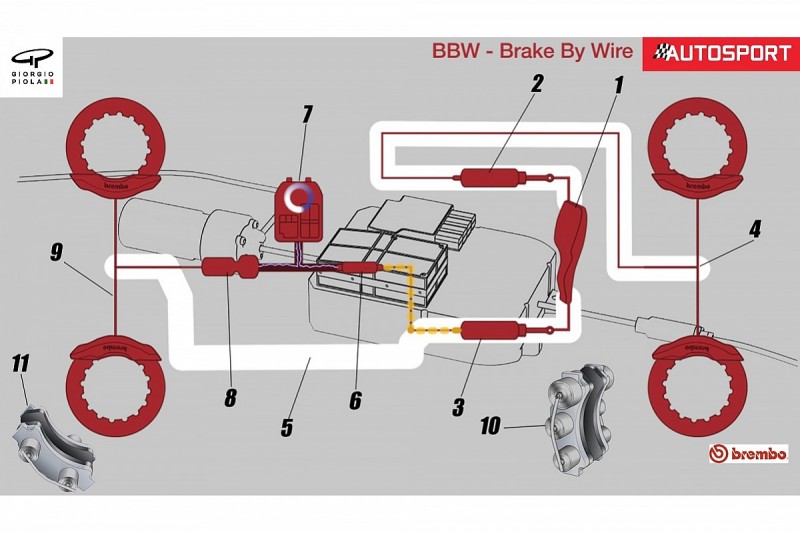 This Brembo diagram explains how the brake-by-wire system works.

Under braking, the system works at the front as in the past with the pump pressurising the fluid acting on the pistons, the pads and the discs to slow the car.

The rear brakes use electronics to manage the system, which includes a 'compliance chamber' [6] that gives the driver more feel.

The system is controlled by an electronic control unit [7] that slows the motor generator [7] and, through an actuator [8], creates pressure in the rear brakes [9].

The braking effort at the rear is through a combination of the pressure on the brakes and the deceleration effect of the MGU-K being charged by the heat energy being recovered.

The extent of the MGU-K's influence on braking is dictated by how much energy is being recovered at any given time, with F1 regulations stipulating a maximum yield of 2MJ per lap.

At the front end, the traditional six-pot calipers remain [10], but at the rear the discs are smaller by up to 12mm and some have four pistons. 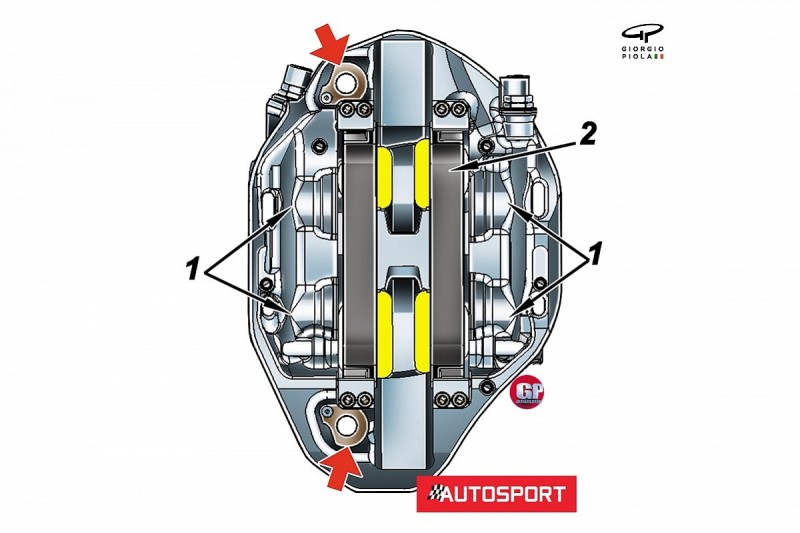 In 2014, Mercedes, McLaren, Sauber and Red Bull all cut back to four pistons on the rear brakes and 260mm rather than 278mm diameter discs, as well as a reduction in width to 26mm.

This was because of the decreased demand on the brakes thanks to the braking caused by harvesting energy, as having fewer pistons reduces the amount of pressure that can be applied to the pads. 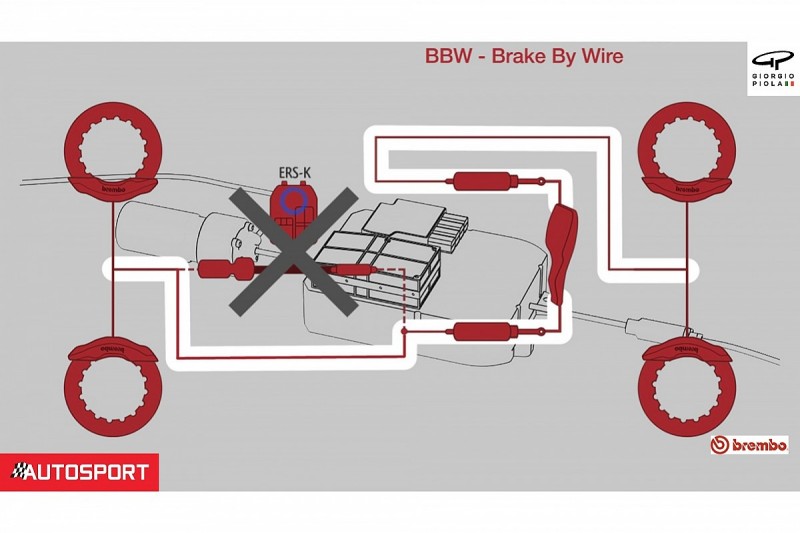 In that year's Canadian Grand Prix Mercedes was running first and second when both cars lost use of the MGU-K and, as a result, had to use the rear brakes conventionally without the braking effect of harvesting or the management by the brake by wire system.

This eventually cost Nico Rosberg the lead to Daniel Ricciardo, while the other Mercedes of Lewis Hamilton retired shortly after jumping ahead of his team-mate at the first pitstop with rear brake failure thanks to the extra loading created by using the brakes conventionally. 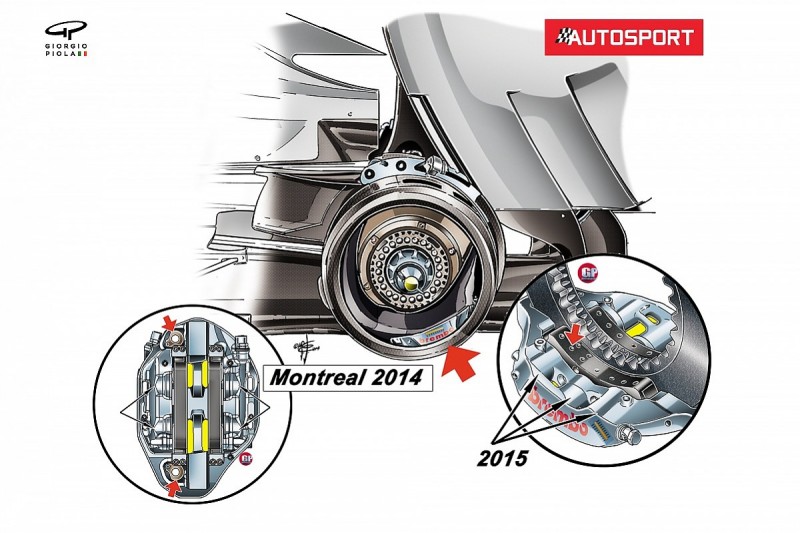 As a result of those problems, Mercedes subsequently reverted to a six-piston caliper, although McLaren, Red Bull and Sauber continue to use four.

When Ricciardo lost the use of the MGU-K in the recent Monaco GP, he also had to adapt to the loss of braking at the rear being created by harvesting energy.

"The rear brakes got really hot, so I went six or seven percent forwards with the brake balance," said Ricciardo after his victory.

"That's a lot. Maybe we go one or two percent change during the race, so we had to go a long way forwards and I had to lift a lot before braking to save the brakes and put less energy through them." 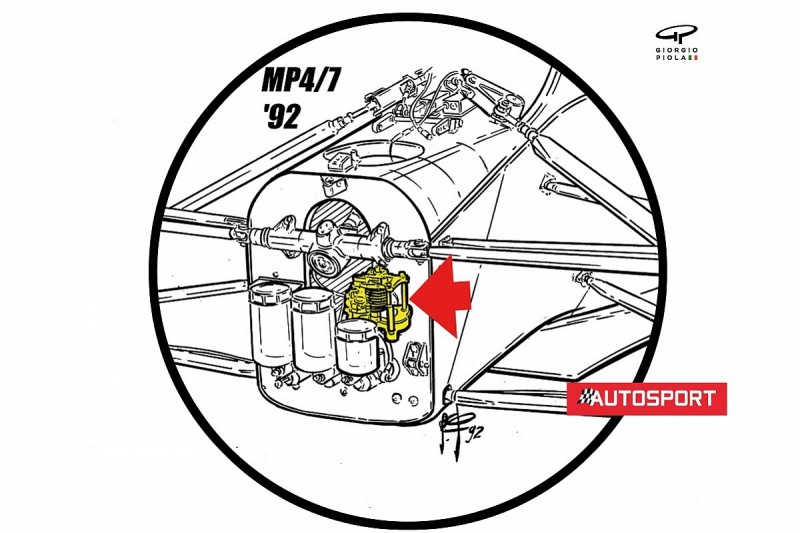 At the Brazilian GP early that season, the McLaren MP4/7 ran with electronically managed hydraulic actuators instead of the traditional throttle cable.

The pressure the driver felt in the throttle pedal was created by an external spring, marked in yellow.

Montreal's Circuit Gilles Villeneuve puts very different demands on the brakes to the previous race on the Monte Carlo streets.

In Monaco, the challenge is to cool the brake caliper because there are multiple, regular braking events but not from high speed. 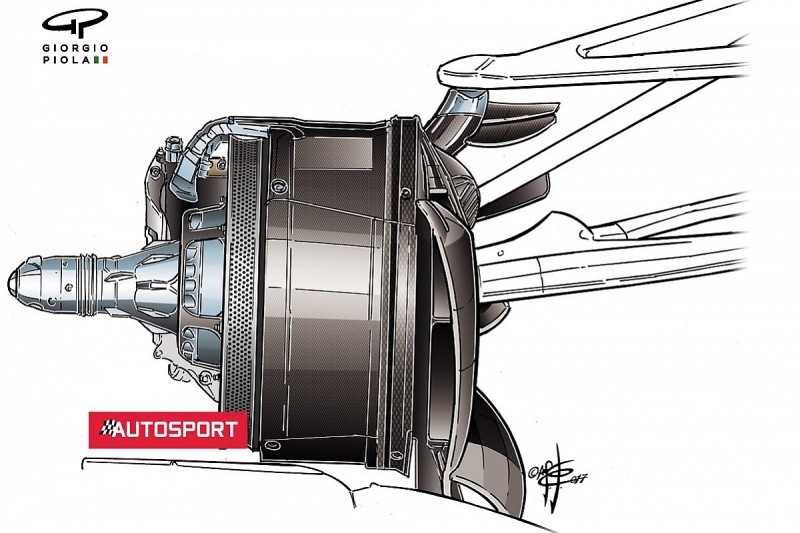 The lack of high-speed running also means teams must run the maximum size of brake duct to keep the brakes cooled.

In Canada, cooling the disc and managing the wear is the most important thing. 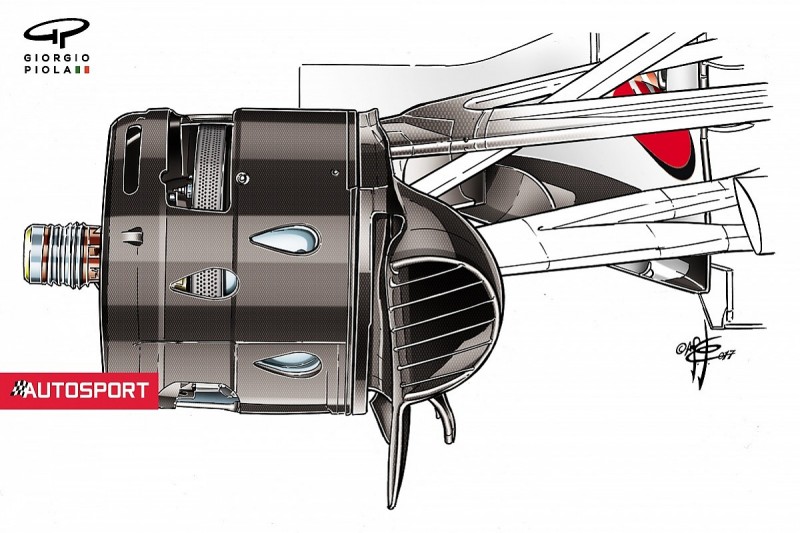 The images show the Mercedes (above) and Ferrari brake cooling configuration from Canada last year, with the maximum number of ventilation holes.

Many drivers have suffered braking problems at the circuit, for example Heinz-Harald Frentzen crashing out late in the 1999 race after suffering a failure.

Based on data released last year by Brembo, the maximum deceleration in Montreal is 4.8g, with the braking zone for the hairpin particular demanding.

Of the seven braking points in Montreal, the most critical is the braking zone into the final right/left chicane that exits by the 'wall of champions'.

Cars hit the brakes at around 200mph and brake for 1.6s to slow to around 92mph.

This takes only 49 metres, with 4.7g deceleration and a force on the brake pedal of 161kg.

The hairpin at Turn 10 is the best overtaking opportunity, with a 63 metre braking zone to go from 181mph to around 42mph in 2.44s.

Roebuck: Why abandoning Monaco is so rewarding

Brendon Hartley has to remind himself to enjoy Formula 1