Ferrari arrived at Formula 1's Emilia Romagna Grand Prix in relatively high spirits given its recent results, having been able to unlock more performance from its SF1000

Throughout the season, the team has been working on finding the right combination of upgrades and retrogrades in recent races to help unlock some of the SF1000's hidden potential.

Although it still has a long way to go in its quest to return to the sharp end of the grid, its work over the last few races has not only resulted in a solid showing on track, it should also pay dividends going forward.

Over the Portugal and Imola races, the team has taken the opportunity to tune its downforce level at the front of the car, trimming the upper flap to shorten its chord around the site of the front wing adjuster (below).

This is work that the team seems to be carrying out at the track, rather than sending new flaps to each venue.

Ergo, this is not typically something seen from Ferrari over the last few years. 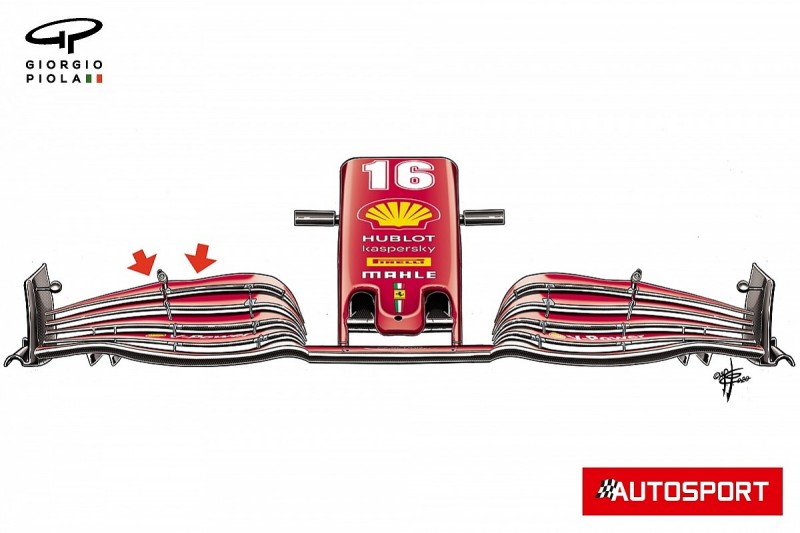 This further signals the team's intent, as it adapts to the challenges that this season has thrown up and as it attempts to balance both its short and long term development goals.

Ferrari also opted to run with less downforce at the rear of the car too, returning to its gentle spoon-shaped rear wing.

In this configuration the team has really pushed the design of the endplate further, with the thickness reduced around the mainplane and upper flap to expand the outer channel's influence on the airflow.

On the hanging section of its endplate (below) the elements are all connected, and the forwardmost one acts like the tail seen on some rival cars. This creates a U-shaped channel for the airflow to follow as it enters from the other side. 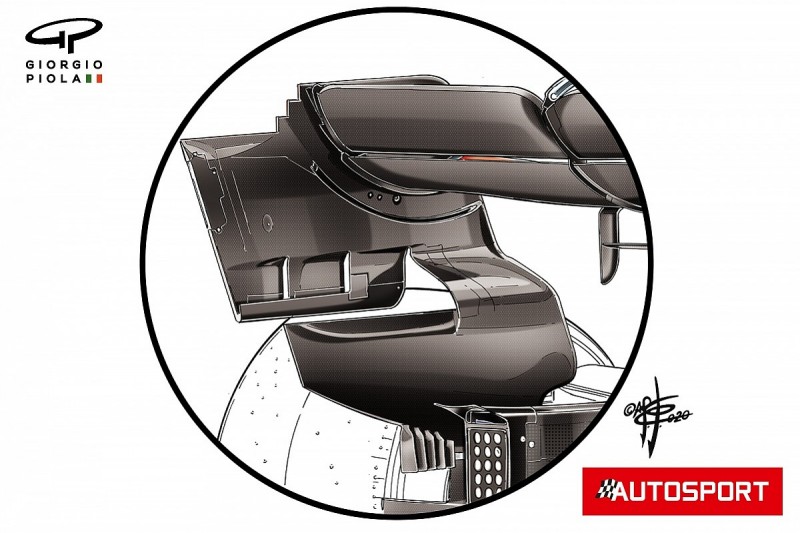 The floor introduced at the Portuguese Grand Prix at Portimao was also retained by the Scuderia, as the team clearly felt the retrograded design, which featured three vertical fins ahead of the rear tyre, offered more performance than its predecessor.

Meanwhile, the diffuser, which is a throwback to the design used by the team at the first race of the season, was also kept for this weekend.

The stiffening strap connects all four of the diffuser elements together, rather than just the outer three from the diffuser introduced at the Styrian GP.

This is likely in response to reducing flutter at a certain speed and perhaps brings with it a little more aerodynamic consistency.

While Leclerc enjoyed another high points-paying finish for the Scuderia, Vettel once again fell short. However, were it not for lap one damage and a long pit stop then the four-time champion may well have finished in the points.

Vettel's scuffle with Kevin Magnussen during the opening lap resulted in a broken the front wing endplate that he carried through the entirety of the race. This would clearly have an impact on aerodynamic performance but also meant that the team and driver had less data to work with too. 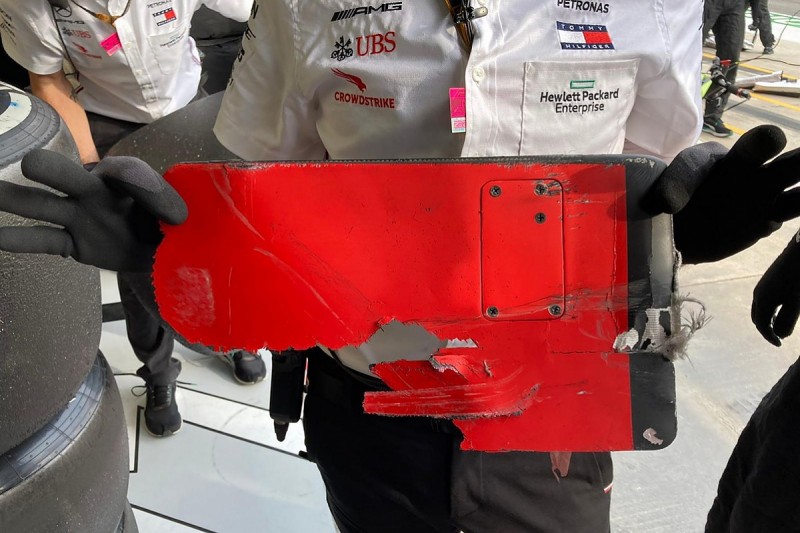 The section of Vettel's endplate that became lodged in Valtteri Bottas' bargeboard cluster, and cost the Finn a chance of the race win, has the thermal imaging camera attached to it, meaning Ferrari was flying a little blind on that tyre.

Remarkably the German's lap times hardly fluctuated and his pace, considering the level of damage, was pretty decent, meaning he ran as high as fourth place at one stage in the race when the soft runners ahead of him pitted.

Vettel also had the misfortune of having a visor tear-off lodged in his rear wing at one point too.

But the moment that really changed the face of his race was the slow pit stop which cost him around 13 seconds due to a stripped thread on a wheel nut. This was especially damaging when we consider that Imola has a high pit stop delta, meaning you already lose a considerable amount of time relative to those on circuit.

All signs point to Ferrari being on the road to recovery and, with the arrival of a revised power unit scheduled for the start of next season, it may be able to close the gap to their rivals ahead a little further still.