The Japanese manufacturer has suffered a trying season since returning to F1 as works partner to McLaren this year, and has lagged behind rivals Mercedes, Ferrari and Renault with its first effort at exploiting the new V6 hybrid turbo regulations.

For Spa, the power unit in the back of the McLaren-Honda MP4-30 will include a revised internal combustion engine, featuring changes to the combustion chamber, intake, exhaust layout and gear-train system, according to Honda motorsport chief Yasuhisa Arai.

Arai told AUTOSPORT his company's existing engine was "much better than Renault" during the most recent race in Hungary, and that the upgraded version will take it closer to Ferrari's output.

The aim is then to match the class-leading Mercedes unit with a further upgrade over the winter, ready for the 2016 season.

"Spa is the final upgrade for this year, with ancillaries to follow in the following race," Arai told AUTOSPORT.

"Mk 3 [will be introduced] in Spa [and] we have already started development on next season's power unit.

"Mk 4 will be on the same level as Mercedes, that is the target; Mk 3 will be on a level similar to Ferrari, which is what we're aiming for. It's a big step." 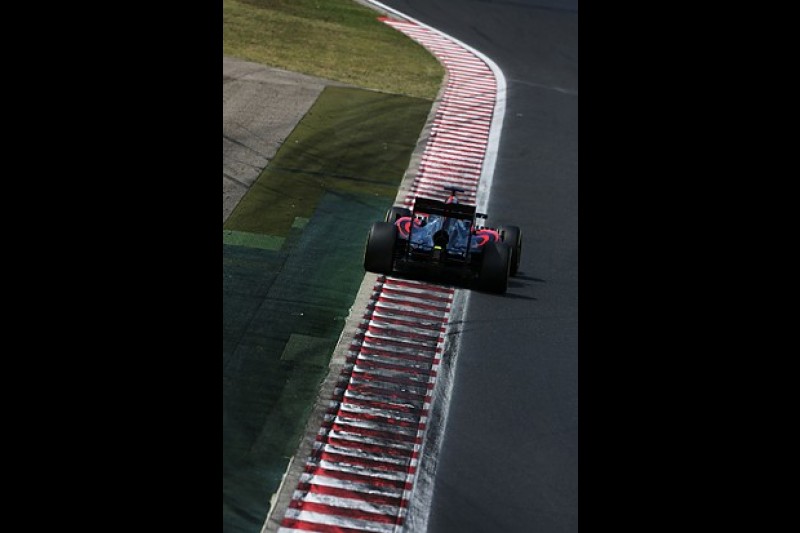 Arai suggested the limitations of the MP4-30, which McLaren has updated continuously over the course of the season, masked Honda's engine performance in Hungary, where Arai said the unit was running at full power.

"[The car has] not so good mechanical grip, or aero, compared with Red Bull there is still a big gap," Arai added.

"We have checked the GPS data; the chassis and aero package needs time and fine-tuning, such as wing angle, ride heights, suspension settings.

"[Engine] unreliability has meant lots of parts were changed in winter testing and so things like flow-vis and taking data has been done during the season in FP1, due to the unreliability in the winter."

McLaren-Honda has suffered a large number of failures of various engine components this year, with Fernando Alonso and Jenson Button having both used six engines already in 2015.

However Arai reckons events at the Hungaroring give the alliance reason for genuine optimism, not because Alonso finished a season's best fifth but that neither the Spaniard nor team-mate Button suffered a single engine component failure.

"From the start of the season we knew there was a cooling problem, so we turned the engine power down a lot," Arai told AUTOSPORT.

"We upgraded the power unit in Spain to 'Spec 2' and we have almost perfected the heat rejection.

"Due to the compact package, you have the very skinny [bodywork] and everything on the inside had many issues regarding heat rejection, which causes a lot of damage for the MGU-H, the MGU-K.

"Finally, in Hungary, we have no problems and we have a good package."