The overall theme of this year's Festival of Speed is "Speed Kings - Motorsport's Record Breakers" and Schumacher's career will be recognised to mark both his 50th birthday and the 25th anniversary of his first world championship.

He sealed that first title with Benetton in 1994 after a season-long scrap with Williams driver Hill, which included a controversial collision between the pair at the season finale in Adelaide that meant neither finished - handing Schumacher the title by a single point.

Their rivalry continued into the 1995 season (pictured below colliding at the British Grand Prix) with both earning race bans for incident with the other. 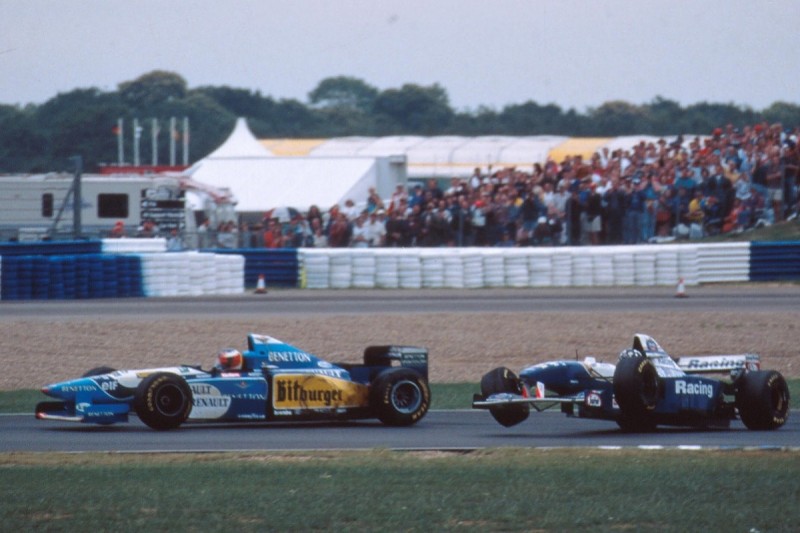 Schumacher clinched his second title that season, before Hill won the drivers' championship the following year.

Goodwood said Schumacher's "famous cars, family, friends, team-mates and former rivals" will be present at the July 4-7 event. It has not disclosed which car Hill will drive, but he is expected to tackle the hillclimb.

McLaren's double F1 world champion Mika Hakkinen, who was another of Schumacher's rivals when the German first drove for Ferrari in the late-90s and early '00s, is another set to drive at the Festival of Speed.

"We are delighted that the Goodwood Festival of Speed has chosen to celebrate Michael's career, in the year of his 50th birthday, and on the 25th anniversary of his first world championship," said Schumacher family spokesperson Sabin Kehm.

"It is especially fitting this year, as the event's 'Record Breakers' theme perfectly encapsulates his incredible achievements, including records, many of which may never be broken.

"We hope the public enjoy the opportunity to see an assortment of his winning cars, and the many friends, rivals and team members, who are coming to Goodwood to support the occasion.

"We thank the Duke of Richmond and the Goodwood team for making Michael such an important feature of this year's event."