Lewis Hamilton says George Russell’s starring performance in qualifying at Spa “doesn’t really change anything” regarding who the world champion prefers to be his Mercedes Formula 1 team-mate for 2022.

Mercedes is still yet to reveal whether Russell will be promoted from Williams to drive alongside Hamilton next season, or if it will choose to keep Valtteri Bottas on for what would be a sixth straight year with an unchanged driver line-up since Nico Rosberg’s shock departure at the end of 2016.

Russell and Bottas remained tight-lipped on progress regarding Mercedes’ decision when F1 reconvened for this weekend’s Belgian Grand Prix after the summer break, where Hamilton highlighted his working relationship with Bottas being “better than ever”, but did say he would support whichever call his team makes.

Hamilton has regularly hinted that he would prefer Mercedes to keep an unchanged line-up for 2022 – the first year of the two-season contract he signed back in July – saying in June that he did not “necessarily see that it needs to change”.

When asked if he still felt the same way about Russell potentially replacing Bottas after the Williams driver had secured a shock second place in qualifying at Spa, with Bottas eighth and set to start 13th after his penalty for causing the first crash at the start of the Hungarian race is applied, Hamilton replied: “I don’t feel any different.

“I mean, George has been doing a great job all year. This just doesn’t really change anything.

“I’m sure he’s got pressure on him just as Valtteri does to do the job. And it’s great to see him delivering. I can’t fault him for it.”

Speaking alongside Hamilton and Spa pole-winner Max Verstappen in the post-qualifying press conference, Russell discussed the importance of delivering his best results at a crucial stage of his F1 career, although he insisted that “regardless” of the current situation he is “out every weekend to do 120%”. 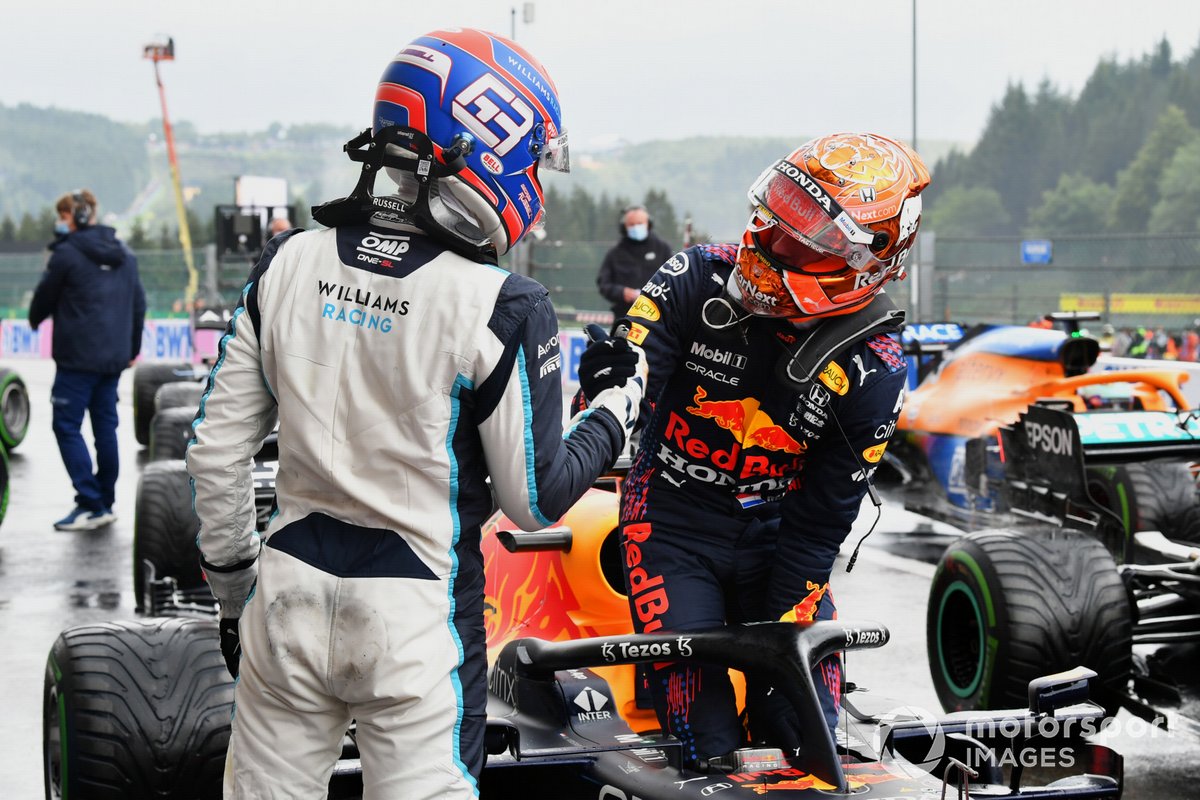 “There’s only opportunity for 20 drivers in the world and there’s probably plenty more drivers who are deserving to be in Formula 1.

“So, regardless of my personal experience in these contract talks, at the moment you’ve to keep showing what you can do and never lift your foot off the throttle because if you do there will be a youngster coming through trying to take your seat.

“You can never be complacent.”

Third place Spa qualifier Hamilton also offered his thoughts on the “difficult for everyone” wet qualifying, which started late due to rain falling ahead of the session and was then red-flagged for over 40 minutes after Lando Norris crashed heavily at Eau Rouge at the start of Q3 after topping Q1 and Q2.

“These guys did a great job in the final stages,” Hamilton continued, speaking about Verstappen and Russell.

“Q3, my first lap was ok, but it was difficult for everyone.

“I’m really happy to see Lando is ok. He was looking incredibly quick.

“I think he could’ve been up here with us or maybe even squeezed me out, potentially.

“He had some great pace today [and] I hope that he gets back on the road tomorrow.”