Lewis Hamilton says Mercedes remains “still far off” Ferrari and Red Bull as Formula 1’s leading teams in the new era and feels he needs “more grip and more power” to be competitive.

The Mercedes driver battled up the order from his lowly starting position of 15th to hold sixth place for the middle part of the race, but was unable to pit under the virtual safety car period when the pitlane was closed due to both Fernando Alonso’s Alpine and Daniel Ricciardo’s McLaren stopping on the track.

Once Hamilton could pit he returned to the action in 12th place and with fresh medium tyres was able to climb back up to 10th place at the chequered flag.

Despite a series of set-up experiments during the Saudi Arabian GP weekend, blamed for his poor qualifying performance, Hamilton conceded Mercedes remained without the car performance to fight Ferrari and Red Bull both in terms of grip and top speed.

“Right now we are not fighting for the top step, we are still far off the guys who are ahead and we’ve got a lot of work to do. It feels like a long way away,” Hamilton said.

“The end result was not great but the race was going really well, I felt relatively well on the hard tyre. I was keeping up with George and I think I put in some decent times and pace considering how old the hard tyres were and then the strategy at the end.

“I don’t know if it was strategy or the virtual safety car, we lost out so much so I think we will keep working hard and keep fighting because that’s all we can do.” 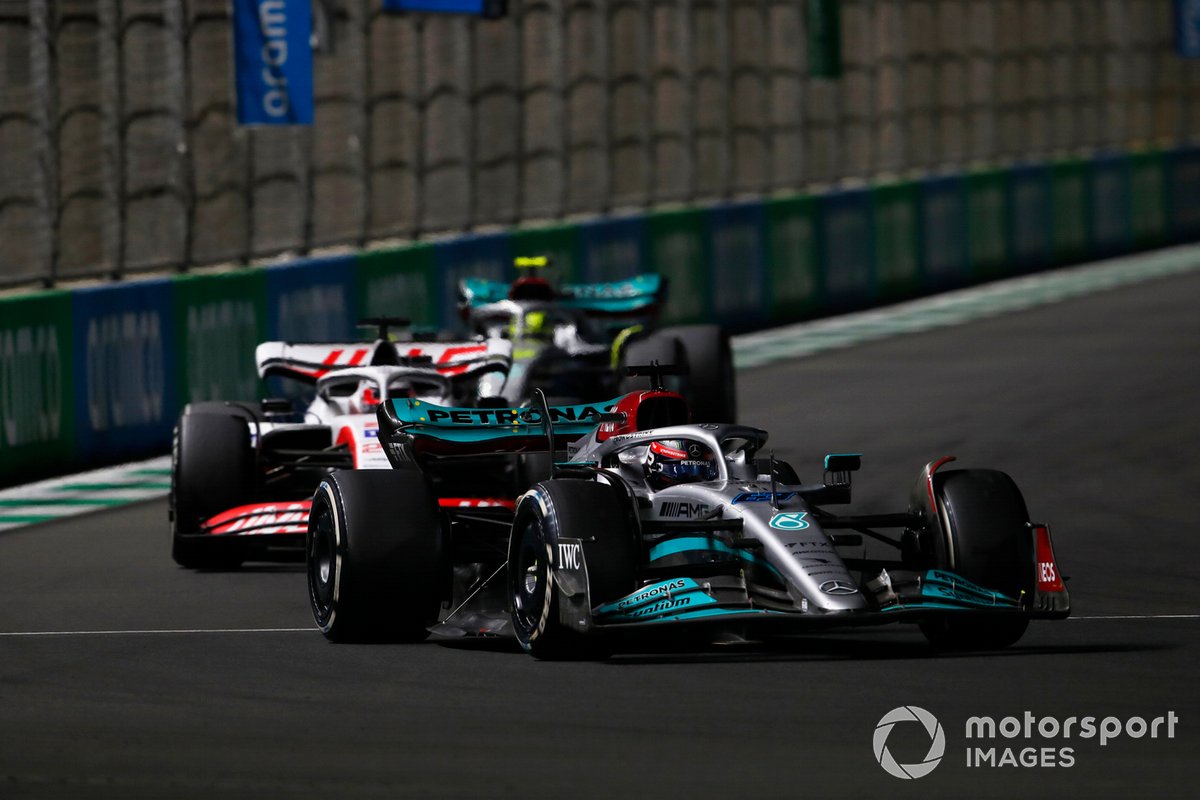 While Hamilton said he didn’t suffer with porpoising during the Saudi Arabian GP, due to using a better suited set-up and ride height with his W13 F1 car, he still felt Mercedes lacked outright speed having been unable to catch the Haas of Kevin Magnussen towards the end of the race.

“We are still really down on speed and on the speed trace,” he said. “I don’t know if that is just one fix or several things, I don’t know how much drag we have compared to the others, but it feels like a lot.”

George Russell shared Hamilton’s view on Mercedes’ progress, having got ahead of Esteban Ocon on the third lap for fifth place before enduring a lonely race behind the top four.

“I think we maximised the balance, we just know what we’re lacking and that’s downforce ultimately,” Russell said.

“Pushing flat out, I was really pleased with how the performance was from my personal side, really well managed, did my best to keep up with the Red Bulls especially after the restart, I did everything to stay within the DRS zone. We’re a second behind them generally.

“We’ve got work to do, so we need to go back and review the data, but everybody knows what we need to improve on.”