The defending champion grabbed the spoils by just half a second after a DRS-enhanced slipstreaming dice with Leclerc in the second half of the contest on the Jeddah Corniche Circuit, after the Ferrari racer tried again to tactically out manoeuvre Verstappen on track.

But the Dutch racer held on for victory as Ferrari scored a double podium, Carlos Sainz Jr completing the rostrum while an ill-timed pitstop dropped polesitter Sergio Perez to fourth.

The Red Bulls appeared to enjoy the stronger launches as Perez pulled over to cover front-row starter Leclerc into Turn 1 at the start but was largely unchallenged as Verstappen provided stiff competition to Sainz.

As Sainz had to keep conservative to miss the rear of his team-mate at the first left-hander, Verstappen was able to tip-toe around the outside as the track snaked back for Turn 2.

Verstappen out dragged the Ferrari to take third place, while Perez escaped to an early 1.3s lead over Leclerc in the opening two laps with Verstappen the same interval back again. 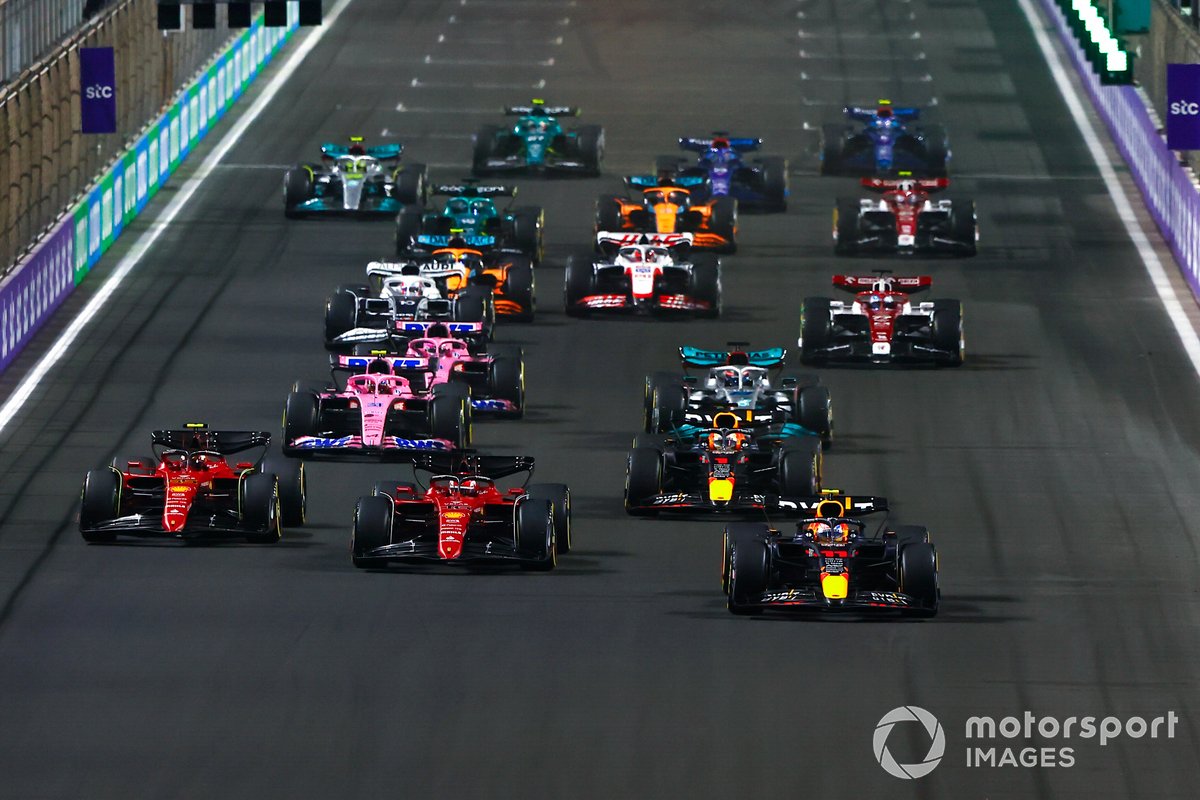 Attention swiftly turned to a frenetic multi-lap scrap between the Alpines, arriving after George Russell had made an early move on Ocon to take fifth place in the Mercedes.

Ocon pulled to the inside down the main straight and appeared to squeeze a DRS-assisted Fernando Alonso against the pit wall, forcing the Spaniard to back out of the lap five move.

The following tour, Alonso tried again but was further back and had to abort a possible manoeuvre around the outside of Turn 1 before the squabble continued next time around.

Alonso was eventually able to nip past but only briefly, as Ocon recovered sixth with DRS into Turn 1 but ran across the run-off, missed the apex and had to give back the position.

The Alpine team-mates were then told to hold position, with Alonso ahead of Ocon.

Perez had been able to extract a lead of over two seconds against Leclerc, with Verstappen 1.5s behind the Ferrari driver while Sainz was a further 3.1s in arrears.

The lead then dipped below 1.5s to prompt Perez to dive for the pits on lap 15 for a set of the C2 hard compound, but a sluggish stop and cold tyres brought him out behind Russell in fifth.

The race win appeared to then slip away for the Mexican as double waved yellows grew into a virtual safety car then full safety car owing to the end of a difficult weekend for Nicholas Latifi. 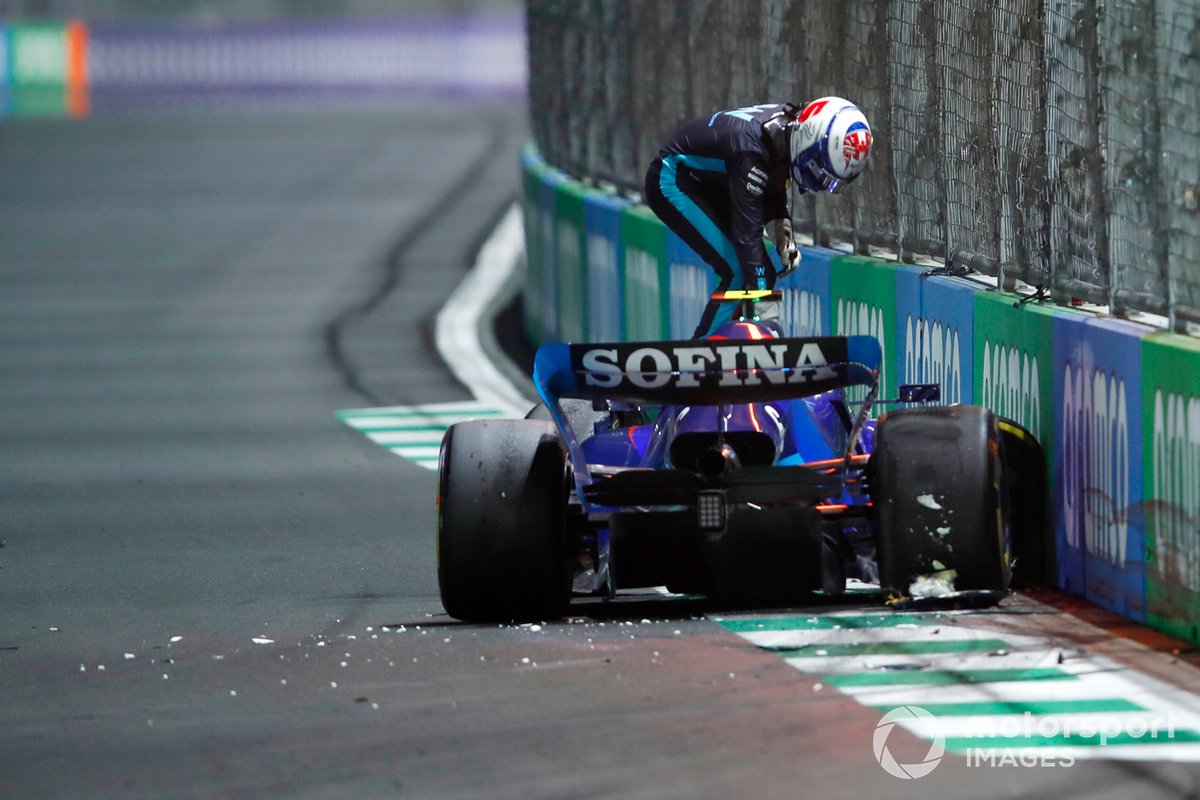 Nicholas Latifi, Williams FW44, climbs out of his car after crashing out of the race

After shunting in Q1, the Williams driver again crashed out on lap 16 when he jumped on the power too early exiting the final corner, Turn 27, and overcorrected to head towards the wall.

That interruption allowed the leaders to pit in neutralised conditions to leapfrog Perez, with Leclerc taking the lead from Verstappen, who narrowly avoided Sainz in the pit lane.

Sainz then had another close call with the next Red Bull as Perez, delayed behind Russell on his out-lap, nipped past at the safety car line as Sainz was squeezed against the Turn 2 wall.

At the restart, Verstappen attempted to put Leclerc off-line at the final corner but the Ferrari driver was able to break the tow to lead unchallenged and build an initial advantage of 2s.

Perez was instructed to hand back the position only after the resumption to slip to fourth ahead of Russell, while 15th-starting Lewis Hamilton stayed put on his hard tyres to climb to sixth.

But only after an engaging battle with Kevin Magnussen that was resolved when the Mercedes driver dived for position into Turn 1, the Haas having repassed in similar circumstances on the previous lap thanks to the double DRS effect on the main straight. 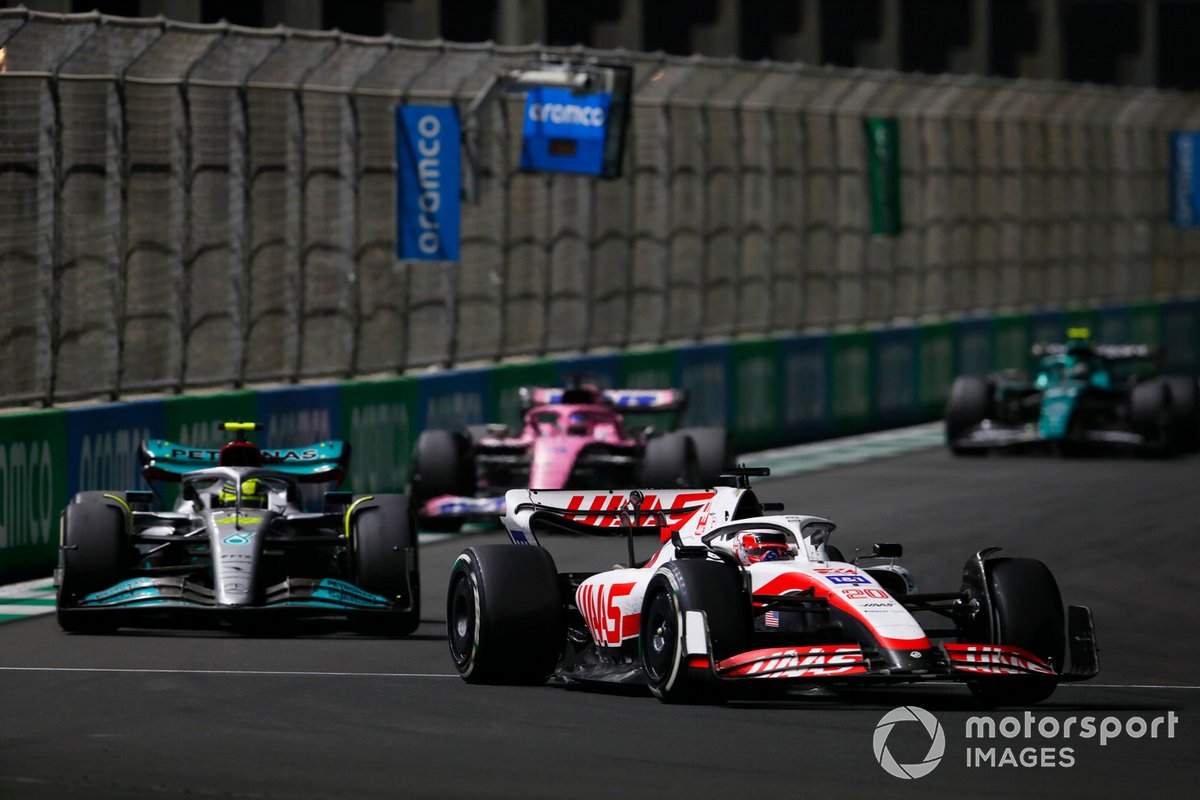 Verstappen, meanwhile, began to respond to Leclerc’s blistering sector one times with a string of fastest laps to reel the Ferrari driver in and cut the gap to under 1.5s.

A second virtual safety car was called into play to press pause on the action on lap 38 when Alonso, Valtteri Bottas and Daniel Ricciardo effectively retired in tandem.

The Alpine was the first to expire as Alonso suffered a total power loss and dropped out of seventh place, though did recover to the pitlane.

Ricciardo’s McLaren gave up the ghost at the start of the main straight after he locked up into Turn 27 and then never got the MCL36 going again.

While Bottas was able to return to the pits and be wheeled into the Alfa Romeo garage, the location of Ricciardo and Alonso's cars meant the pit lane was closed which would hurt Hamilton most of all.

Still on his starting set of hard tyres, he received the call to stop too late and had to stay put until racing conditions returned on lap 41, when Hamilton immediately pitted for medium tyres.

Verstappen now only sat 0.6s off Leclerc as he chased his first win of the 2022 season after his RB18 retried with a fuel vacuum issue in Bahrain.

With a tow down the main straight, Leclerc was forced to pull to the inside and defend on lap 42 of 50 but Verstappen thought against an attempted lunge.

The Red Bull instead saved the fight for position until Turn 27, at which point Leclerc repeated his Sakhir strategy by checking his pace over the DRS detection zone.

While Verstappen had track position, Leclerc was backed up by the overtaking aid and defended his regained lead into Turn 1.

Verstappen was poised for a similar lunge next time around but as he sought DRS, locked up over the detection line and fell back to hand Leclerc position and marginal breathing space.

The battle, though, appeared to take its toll on Leclerc’s rear tyres and on lap 47, the Ferrari oversteered out of the final corner to allow Verstappen to successfully get the run for first place. 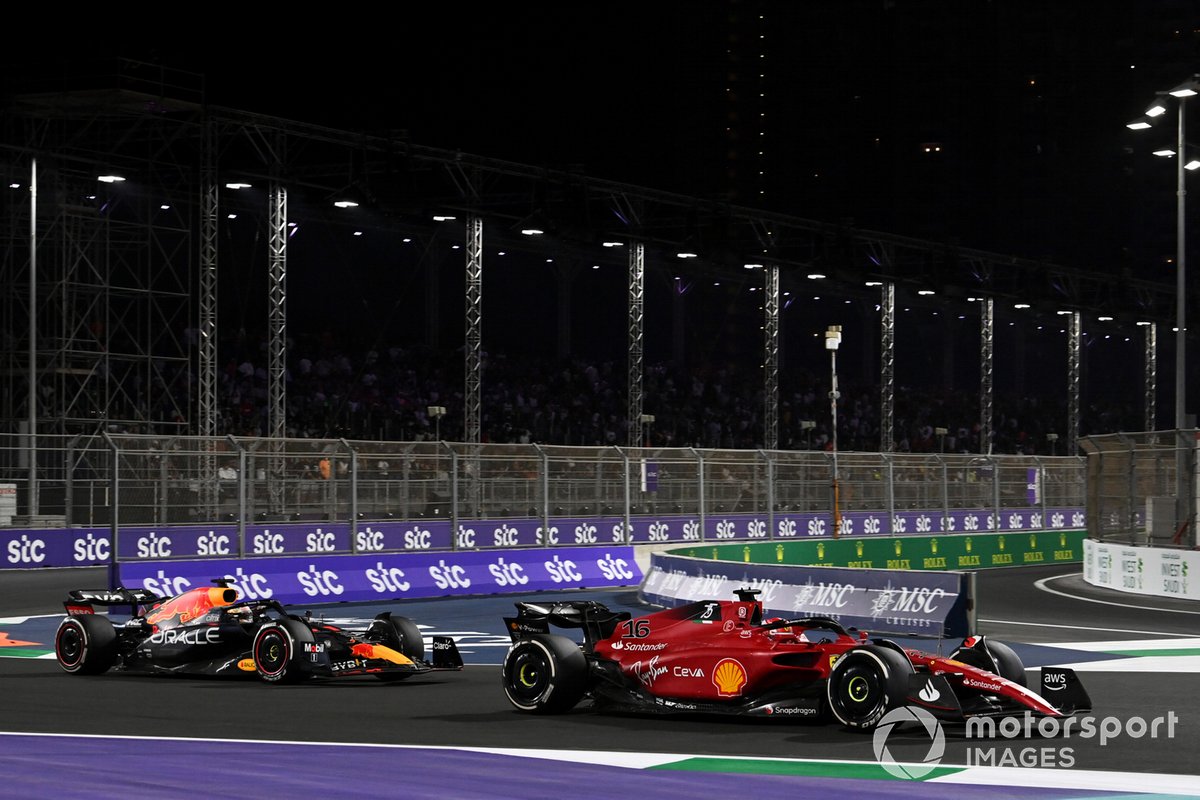 Leclerc was forced to abort Turn 2 as a result, teeing up a last-lap showdown. While Leclerc could close to within 0.5s, Verstappen hung on to a sensational win.

Sainz was seven seconds further behind Leclerc, as Perez completed the top four over a subdued race for Russell. Ocon bagged sixth ahead of Lando Norris and Pierre Gasly.

Magnussen, who entered the race with neck pain after tweaking it in qualifying, was ninth as Hamilton hung on for the final point in 10th.

Despite a drive-through penalty for not serving a 5s pitstop penalty plus the latest clutch and anti-stall issues for Zhou Guanyu, the rookie returned 11th as the Aston Martins of Nico Hulkenberg and Lance Stroll completed the finishers.

Stroll was able to limp over the line after a late Turn 1 coming together with Alex Albon, that ended the Williams’ drivers race a touch early and introduced a yellow flag at Turn 1 during the final stages of the Verstappen-Leclerc duel.

Yuki Tsunoda, who was unable to set a qualifying lap following a water system issue, pulled up in sector one aboard his AlphaTauri on his way to the grid with an engine issue.

That, combined with Haas electing not to start Mick Schumacher’s car to avoid rushed repairs after the German’s huge Q2 shunt, created a scenario in which only 18 cars started.