Lewis Hamilton says "it's no secret" that the rear-floor rule changes brought in for the 2021 Formula 1 season "have been done to peg Mercedes back".

While the teams were required to carry over the vast majority of their 2020 car designs for use this season, changes to F1's technical rules mandated that a triangle-shaped area of the rear floor had to be removed.

This was part of an attempt to cut downforce levels by up to 10% of what the cars were producing in 2020, which also included a reduction in the size of rear diffuser strakes, to lower speeds and reduce the risk of tyre failures.

During winter testing, where Mercedes notably struggled with rear handling, suggestions emerged that the low-rake aerodynamic concept the team uses was losing out when it came to recouping downforce lost to the reduced rear floors compared to the high-rake concept pioneered by Red Bull early in the last decade.

On Friday, Mercedes team boss Toto Wolff confirmed that this was "definitely" occurring, with the situation also impacting the Aston Martin squad after it changed from the high to low-rake car concept with its Mercedes W11-inspired RP20 machine as Racing Point last year.

When asked about Wolff's comments in the post-qualifying press conference after taking P2 on the grid for the season-opening Bahrain Grand Prix behind Red Bull's Max Verstappen, Hamilton said: "It's no secret that what the changes [have done], of course they've been done to peg us back." 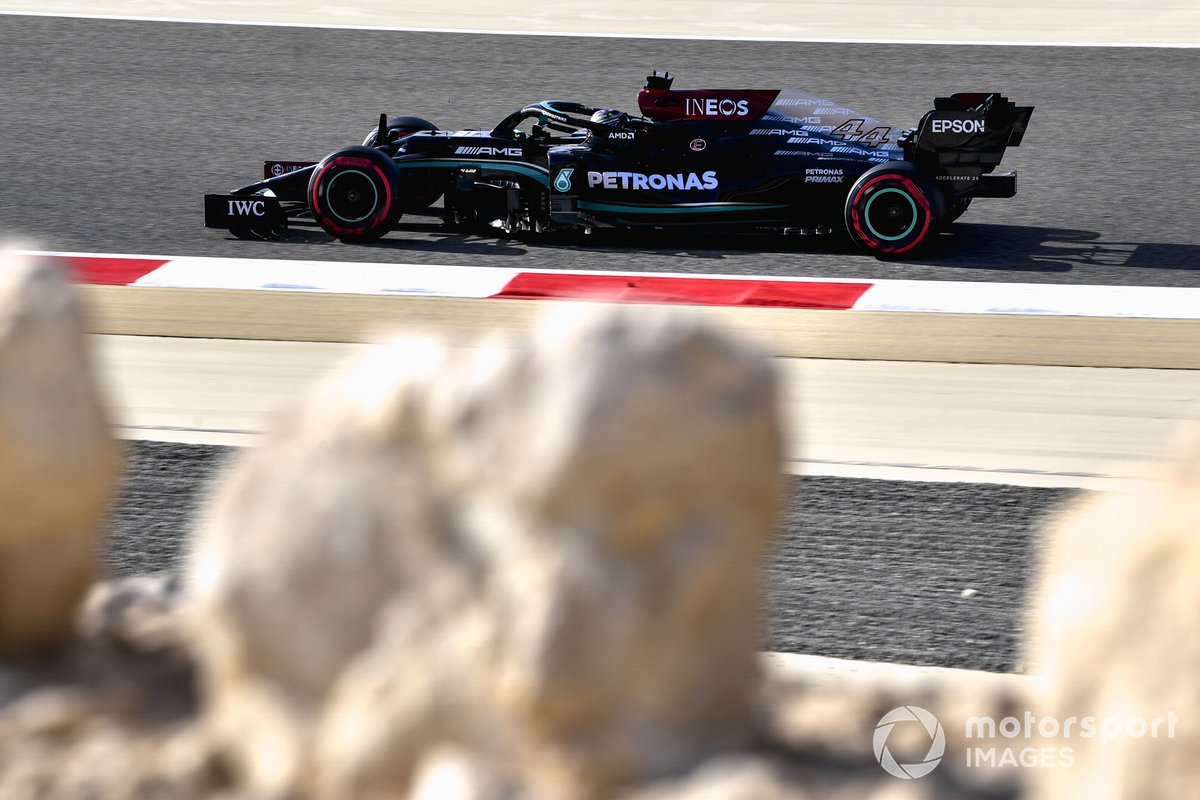 The world champion likened the situation to 2020, where a rule change brought in just before the Italian GP meant teams could no longer alter the engine modes on their cars, and must run with just one for both qualifying and the race.

Hamilton said: "We had the changes of course last year to our engine to do the same thing.

"But that's OK, we love a challenge and we don't look down on these things, we just work hard to do the best we can. And that's what we'll do."

Hamilton's team-mate Valtteri Bottas was also asked about the situation in the post-qualifying press conference.

Bottas did not want to comment on the merits of low-rake vs high-rake when it comes to the impact of the 2021 rear floor changes, instead saying Red Bull has "a really strong package overall".

He added: "Their power unit, chassis, their aero is good. They've done a good job over the winter and we need to do a better job."

When Verstappen gave his response to the subject, he suggested Red Bull's gains over the off-season compared to Mercedes were the result of "a few factors".

"It's [been] our philosophy now for a long time, of course," he said.

"I don't think you can point it out on that [where Red Bull has improved], I think there have been a few factors.

"Like, we knew our weakness from last year and that's not only to do with rake.

"I think also from the engine side I think Honda has worked really hard to improve their engine in general and I think they've done a great job."