Lewis Hamilton says it would have been “pointless to defend any harder” against Max Verstappen in the Red Bull Formula 1 driver’s race-winning pass at the French Grand Prix.

Verstappen caught Hamilton on the penultimate lap of last weekend’s race at Paul Ricard, which the Mercedes driver had been leading for the previous 20 laps after Red Bull switched Verstappen to a two-stop strategy once he had regained the lead unexpectedly at the first round of pitstops.

After being waved past team-mate Sergio Perez, Verstappen passed Valtteri Bottas for second place nine laps before he moved back into DRS range behind Hamilton.

As the pair ran down the Mistral Straight on lap 52 of 53, Hamilton moved to the middle of the track ahead of the Turn 8 first part of the chicane that divides the straight, but Verstappen then dived further to the inside to take retake the lead in a single passing attempt.

When asked by Autosport if he could have defended harder against Verstappen in that sequence, Hamilton replied: “Firstly, there’s marbles on the inside, so I didn’t want to make my tyres any worse than they already were.

“He had the DRS open, so if he didn’t pass me there, he would have passed me the straight afterwards.

“It would have made zero difference and I just had no front end, so he would have got me either way.

“It was pointless to defend any harder.

“I think you saw what happened to Valtteri – just ended up going straight on.

“So, there was no point messing up the tyres anymore.” 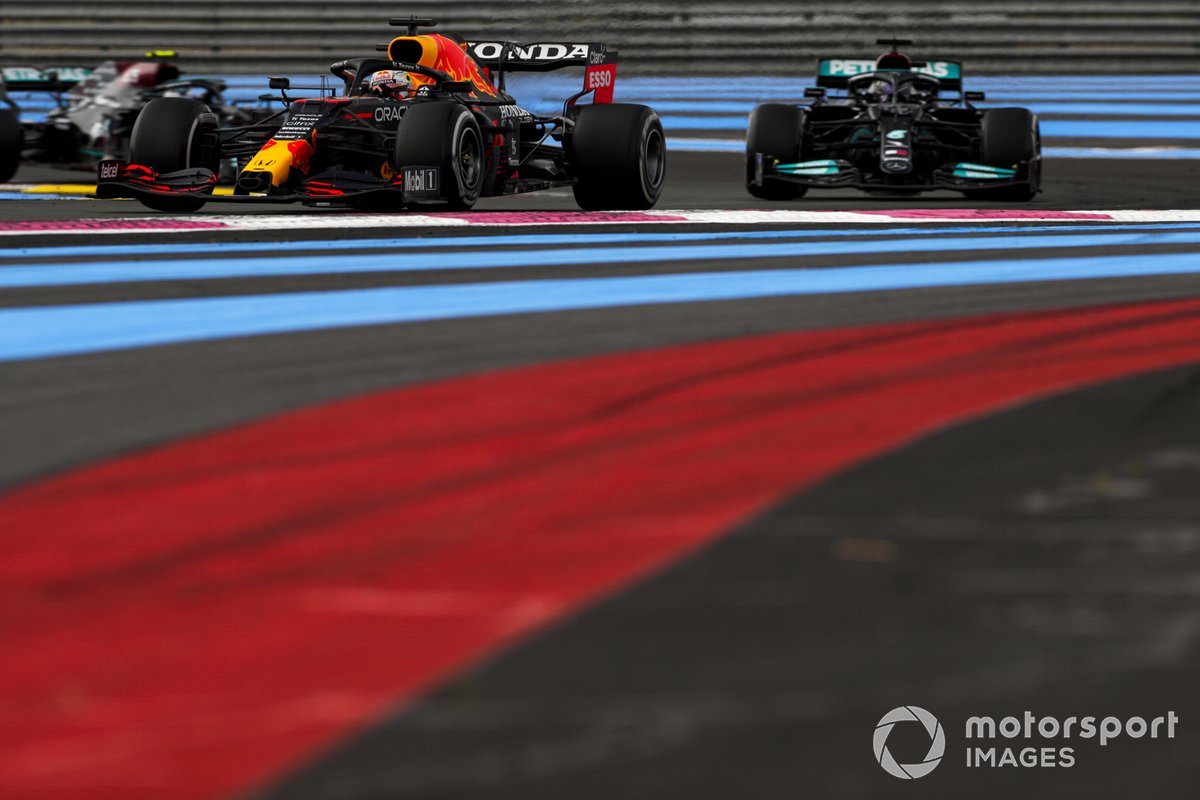 Hamilton also said that had Mercedes opted to switch him to a two-stop strategy, as it did to win the 2021 Spanish GP at Barcelona nearly seven weeks ago, such a move “would potentially have done the job”.

He added: “But it was not on the cards at all for us, so we’ll do some analysis and try to figure out why.”

After climbing from his car in parc ferme once he had eventually finished 2.9s behind Verstappen, Hamilton had explained what he was thinking when Verstappen pitted for a second time.

“He was already quite far ahead so the only option I really had was to stay out,” he said.

“Because again he was undercutting me [as Verstappen stopped one lap before Hamilton at what would be Mercedes’ sole round of pitstops], so he would come out ahead and I wouldn’t be able to get past as they were too quick on the straights.

“The only option was to stay out as long as possible and hope the tyres held together.”