Magnussen has been involved in incidents with other drivers this season - notably at the Hungaroring, where he was involved in a spat with Renault's Nico Hulkenberg.

He was also criticised recently by McLaren driver Fernando Alonso over his team radio in Malaysia.

But Magnussen said he saw no reason to change his approach without any kickback from the stewards, and said he was not concerned about complaints from other drivers.

"I think everyone is maxed out on trying to make it as hard as possible for each other. What matters to me is what the stewards think.

"I know that I am pushing hard, and that's my intention. If it's fine for the stewards, it's fine.

"We all get a bit hot-headed in the car in that situation.

"Whenever someone cuts in front of you or whatever, you swear, and you think after maybe it was OK, or whatever.

"It doesn't mean so much when it's in that moment in the car.

"After the race to say things, get further into it, I wouldn't do that."

Magnussen said Haas was fully supportive of his approach.

"I have backing from the team, and that makes you feel good and free to race. I feel like it's easier," he said.

"You get more experience as well.

"It's easier to give everything you have if you know you have the support from the team, and when you don't feel like you can't make a mistake it's easier not to make a mistake, and perform well." 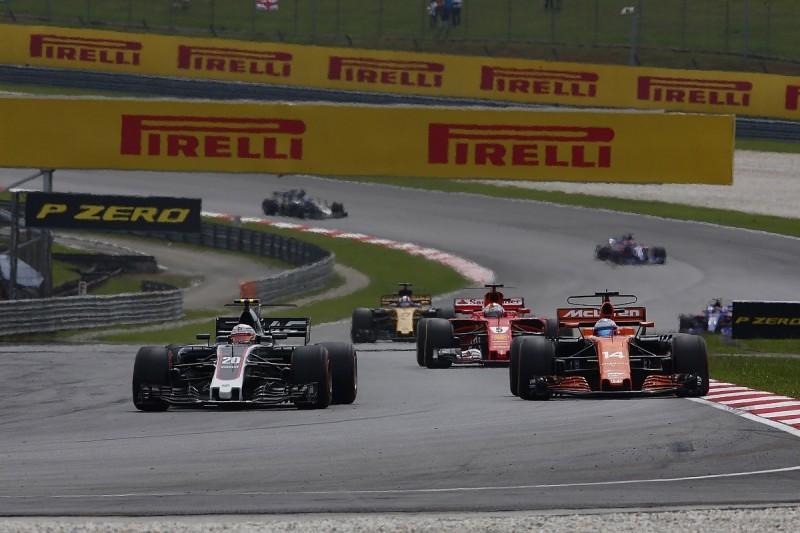 The Dane added his forceful defensive driving was often the result of his fast starts vaulting him ahead of cars with stronger race pace.

"We're not in a position to just drive into the points," he said.

"I often find myself further up in the beginning of the race, because whenever everyone is together it's easier to make positions and fight your way up.

"Once everything settles your race pace is more important.

"Sometimes when you're in eighth position or whatever, and you're not fast enough, then you have to fight.

"There is a difference in the way you have to drive, if you're fast or you're not fast.

"If you're trying to get points and you're not really fast enough to be in the top 10, then you really have to fight hard."