Marcus Ericsson says he is carrying a 10kg weight disadvantage to Sauber team-mate Pascal Wehrlein, which is hurting efforts to prove he deserves to move up the Formula 1 grid

Many F1 teams have battled to get their 2017 cars under the weight limit, especially as aerodynamic development parts have been added.

Mercedes had to put its car on a diet earlier in the season, and Valtteri Bottas revealed after the recent Malaysian GP that Mercedes also removes sensors after Friday practice due to weight concerns.

Sauber estimates it has been running between four and eight kilos overweight on Ericsson's car this year, and the taller Ericsson says the disadvantage compared to Wehrlein has grown recently.

Wehrlein has scored five points so far, while Ericsson is yet to register and also trails Wehrlein 9-4 in the intra-team qualifying battle - though the average pure pace gap between them stands at 0.049%, the smallest between any regular team-mate pairing on the grid.

"We've been close, but he has good numbers on me, which I don't really like," Ericsson said.

"It's also been difficult for me with the weight disadvantage.

"At the beginning of the year it was a bit less but for the last four or five races it's been 10 kilos difference.

"That is a lot of lap time on every lap on every track - usually they say it's three or four tenths a lap with 10 kilos."

Ericsson says he is "trying all the time" to lose weight himself, but "that's the problem with being tall".

"It makes it difficult," he added. "I need to beat him as much as I can.

"It's been a lot of years in F1 now where I've been in probably the worst car, and it's difficult then to show your skills, and that also makes it more difficult to get a better seat." 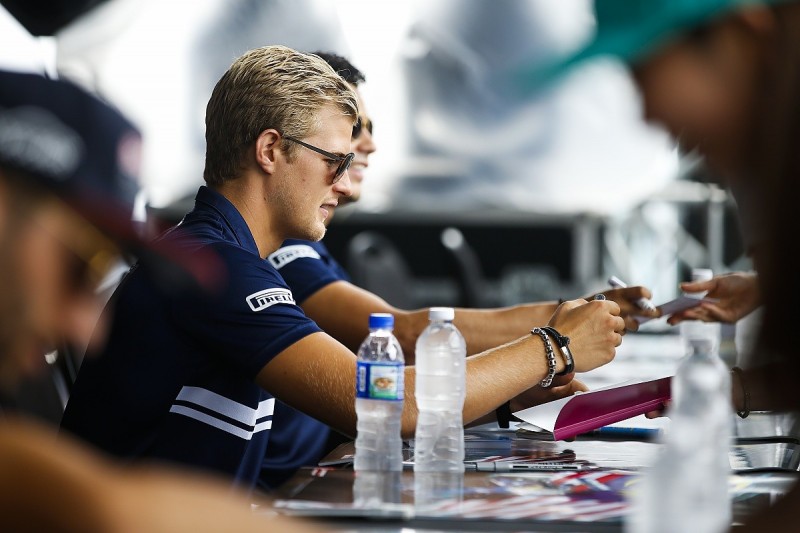 Ericsson is keen to move up the grid after three seasons with Sauber, but admits remaining at the team for a fourth is now his best chance at staying on the grid in 2018.

His management has contacted Williams, but Autosport understands Ericsson is not among the four drivers in contention there - with Wehrlein recently added to that shortlist.

Unless Ericsson can somehow force his way into Toro Rosso, his only hope now is that Ferrari does not agree a deal with Sauber for both Charles Leclerc and Antonio Giovinazzi to graduate to F1 together with the team in 2018.

"Williams is looking less likely for me and Sauber is probably the strongest option at the moment," Ericsson confirmed.

"There are always people trying to take your seat and there always will be.

"We've been looking around a bit at different seats, which I think everyone that doesn't have a contract for next year has to do.

"At the moment nothing is done. My management is working hard on it and we see there are some options."