The team will one run car with Carbon Industrie brakes through both practice sessions on Friday at Interlagos, with the possibility they will then also be used in the race.

The other car will continue to run with current supplier Brembo, which both Romain Grosjean and Esteban Gutierrez have experienced race-ending problems with of late.

Italian manufacturer Brembo is understood to be keen for Haas to look at a new supplier to assess whether it is solely responsible for the problems.

For this weekend's race in Mexico team principal Gunther Steiner has confirmed both cars are running with a different brake rotor material supplied by Brembo in a bid to get on top of the ongoing difficulties.

Both Grosjean and Gutierrez came through the day with no further problems with their brakes, although the Frenchman did miss over an hour of FP2 due to an ECU fault that was difficult to trace, leading to the removal of the floor.

Gutierrez, who retired from the US GP last time out with his brake failure, said of the new material: "The brakes are a bit better than Austin, they are reinforced.

"As a team we're doing our best to put them in the best condition possible.

"It's not a great feeling to be in the car knowing the brakes could fail, especially here where we reach 360kph."

Grosjean added: "So far it hasn't been too bad in terms of braking. It was a bit better.

"We're still not exactly where we would like to be, but I haven't been complaining all day long."

WAY OFF THE PACE 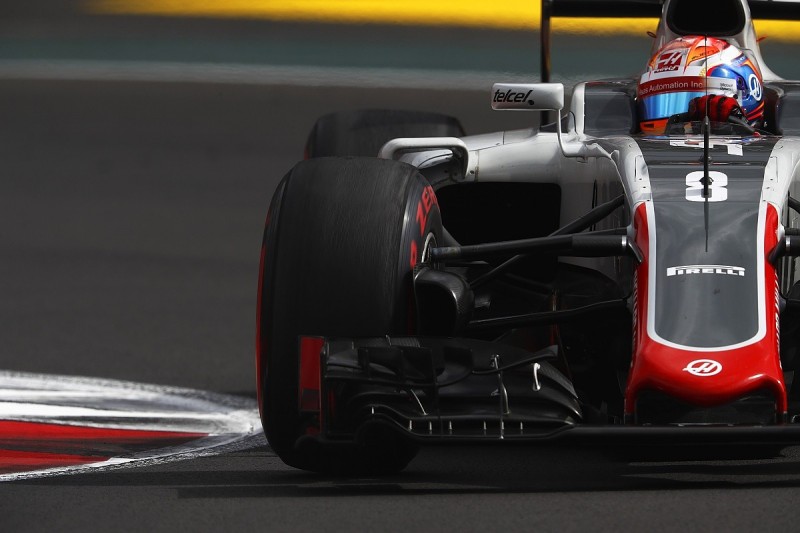 Gutierrez, making his home debut this weekend, and Grosjean could only finish 22nd and 20th respectively at the end of the second session.

Gutierrez has confirmed that for cooling purposes the front brake ducts were changed "which completely destroyed the downforce", resulting in the poor times, with the team to switch to the previous design for Saturday.

Gutierrez said: "Apparently, there were some mis-measurements. You can imagine how it was to drive.

"It was obviously very worrying when we saw the numbers in practice two.

"It was a bit strange, and we didn't realise it during the session.

"We could have very quickly changed back to the other spec.

"Now we need to be sure and work tonight to fix everything so it is working as it should be."

Why Mexico practice is mixed up