Grosjean completed just eight laps when the brakes on his car failed, sending him into the gravel at Sepang's final corner, coming to a halt just before the barrier.

Team boss Gunther Steiner has stated the brake problem encountered by Grosjean was different to that incurred by team-mate Esteban Gutierrez during the Bahrain Grand Prix in April when a disc broke, but the team is unsure of the details.

"On Romain's car it was a disc failure - it exploded - and we don't know why," said Steiner.

"We saw on the data some vibration beforehand, so we have to investigate why the disc failed because it didn't overheat or anything.

"But carbon brake disc investigations are not easy, it's a science project. There's only dust left, and nothing more.

"We need to see if there's something obvious in the purchase or production and go from there."

With a short turnaround before this weekend's Japanese GP Steiner added: "We have to at least understand if we can do anything about it, or put measures in place that we can check things.

"But before Japan we cannot get new ones as it takes three months.

"It's a concern, but we'll do what we've done for the rest of the year as we've had more races without problems than with, and this is not the same failure as the one in Bahrain." 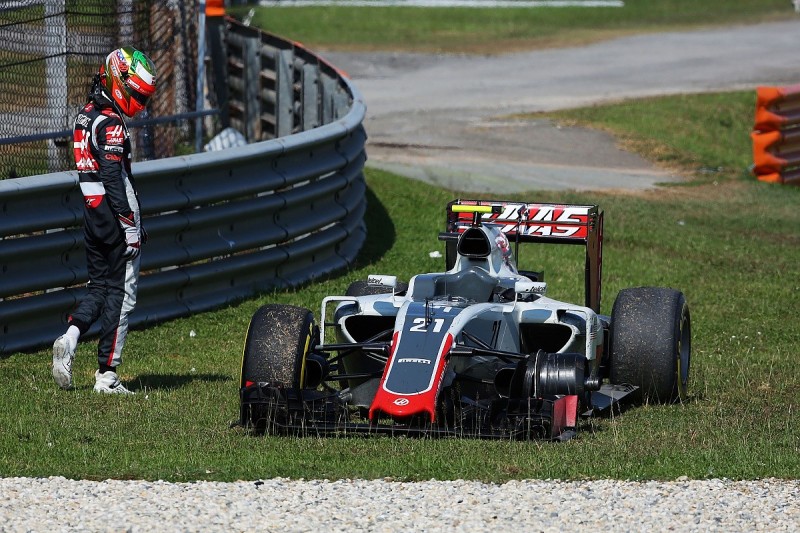 The race in Malaysia proved to be a tough one for Haas, with Gutierrez also retiring after 40 laps when he lost the front-left wheel of his car following his third pitstop, leading to a €5000 fine for the team for an unsafe release.

The FIA stewards recognised Gutierrez was unaware he was driving the car in an unsafe condition.

However, given the mechanical failure that occurred, Haas has been ordered to provide FIA technical delegate Jo Bauer with a report to include "all corrective actions".

Steiner added: "We have sent everything back to Italy to investigate what happened because we are not clear.

"They got the wheel on, and it was tight, but then it somehow came loose, it wasn't completely on when he torqued it, but then the nut shouldn't go on.

"It's too early to jump to conclusions, maybe something was broken before in the assembly.

"But we cannot do all the analysis straight away because you need all the car data to simulate the ways it could have gone right or wrong."