Intrigue over Formula 1 suspension systems pioneered by Mercedes is nothing new, but the latest row over what is allowed can be traced back to the Abu Dhabi Grand Prix

According to sources, a radio conversation between Daniel Ricciardo and his Red Bull pitwall about car set-up and the impact of the suspension on aerodynamic performance left some teams suspicious that there was more to these devices than originally thought.

In particular the idea of the suspension being used primarily to help aerodynamics prompted Ferrari to write to the FIA to clarify exactly what is allowed.

Such a request for clarification to F1 race director Charlie Whiting is common - as it offers teams an opportunity to discern the legality of designs they intend to pursue, the chance to better understand the ones used by their rivals, or highlight to the FIA where others might be operating in grey areas.

Ferrari has queried the use of more complex systems than the one that Mercedes has legally put to good use - primarily one that stores energy that can be then be released to improve the car's aerodynamic platform over the rest of the lap when it is better needed.

But have teams like Mercedes and Red Bull been doing it already, were they planning on doing it for 2017 - or is Ferrari's bid simply to cut off an avenue of expensive development before it pushed on with its own concept?

The crux of Ferrari's request for clarification centres around the recovery and storage of energy to be used at a later time to extend a spring seat or other parts of the suspension assembly. 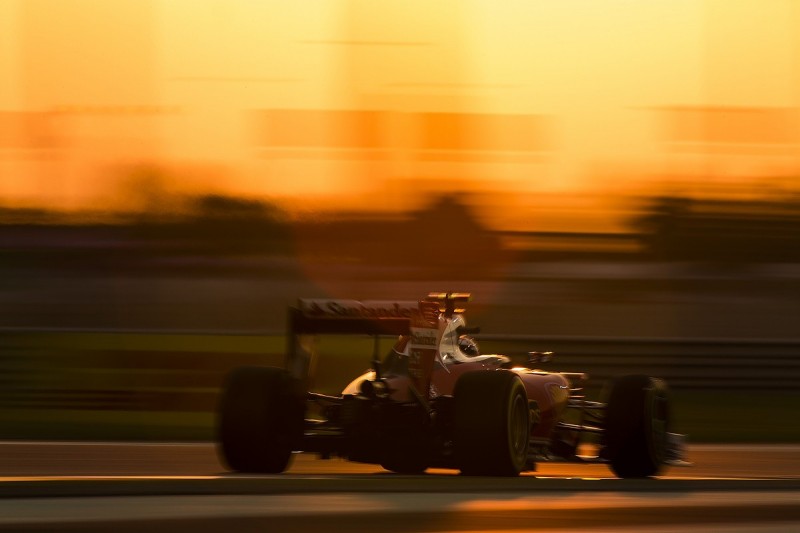 This infers the use of hydraulic accumulators that are designed to store and dispense energy under certain conditions, creating a sort of high-pressure hydraulic computer.

This fluid logic system would react to inputs, as the car undergoes various conditions around a lap.

Think then of the heave element and ancillary remote accumulators as a three-dimensional map, rather than just the cylindrical elements they outwardly appear to be - with small and large chambers interspersed to accommodate the various inputs, loads and conditions.

As an F1 car brakes for a corner, the weight of the car should shift forward and the aerodynamic loads are altered.

If a team fully understood the inertia from a mathematical perspective you could model a reactionary response from the front and rear suspension that would keep the platform of the car within an acceptable tolerance, improving both mechanical and aerodynamic performance.

The knock-on effect is that the driver can carry more apex speed and will accelerate out of the corner earlier than is ordinarily the case. 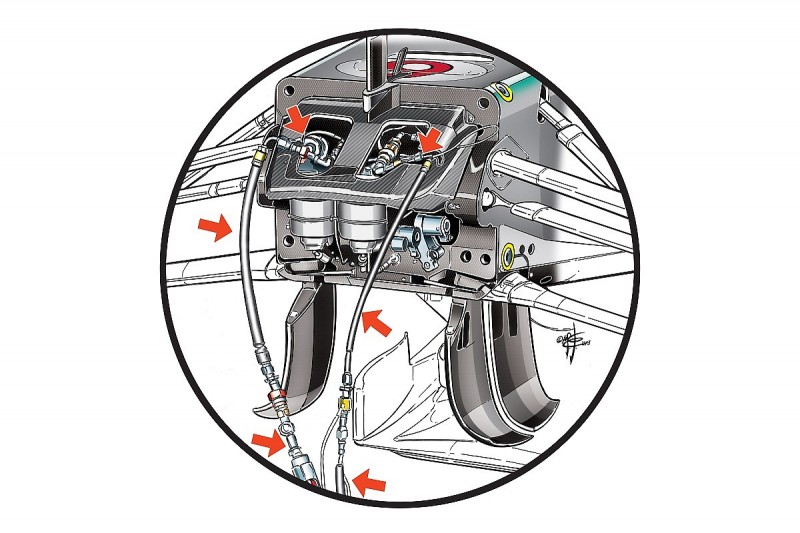 The intrigue surrounding the pre-Christmas technical directive from Whiting suggesting trick suspension systems that stored energy would be illegal comes in the wake of what teams did with FRIC (Front-to-Rear-InterConnected) systems up until their effective ban ahead of the 2014 Hungarian Grand Prix.

The potential aero benefits of a clever suspension system can even be traced back to Renault's famed mass damper during Fernando Alonso's title years - and in recent seasons it was Mercedes that was at the forefront of the FRIC technology.

With FRIC gone, resources were shifted to replicate the peripheral advantages it gave -teams set about creating a similar effect, albeit without the hydraulic connection front-to-rear.

Much of the work done by FRIC revolved around heave - the vertical displacement of the car.

Being able to connect the front and rear also helped to stabilise the car's roll through corners, improving aerodynamic stability as a consequence.

It is natural that the teams would have the FIA believe that the reason for these systems was to improve tyre performance and life, enhancing mechanical grip with an emphasis on increasing the contact patch.

However, while this is true, a chief motivation is always going to revolve around improving aero, with a more stable platform able to provide the team with the ability to hone in on aggressive solutions. 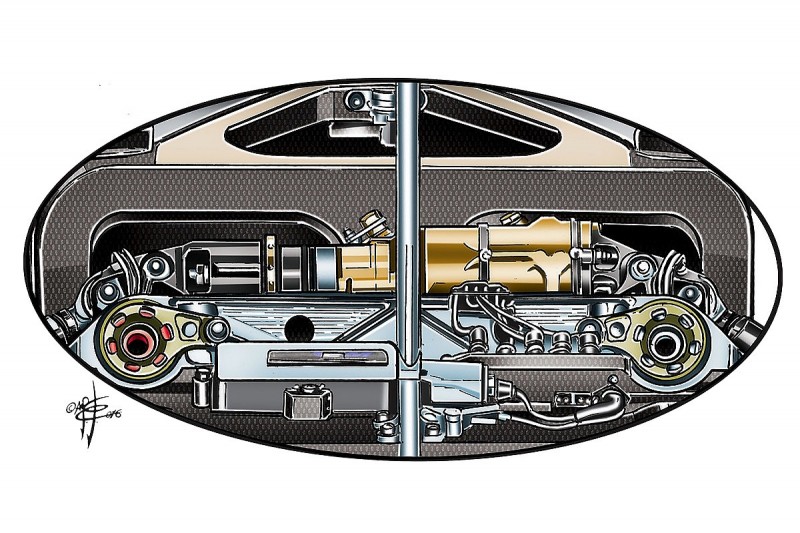 The heave element provides stiffness at speed to improve how the car reacts to aerodynamic load.

At lower speeds, the heave damper is decoupled, giving the driver the type of compliance he needs. But it is during transient conditions that the designers have had to find more and more performance.

In an interview with Giorgio Piola, Mercedes technical chief Paddy Lowe was open about the aerodynamic benefits of the suspension system Mercedes ran at times in 2016.

"A spring classically was linear, [but now] we are playing with far greater and more complex ranges of non-linear compliance," said Lowe.

"That's allowing us to play games with getting the aero platform exactly where we want.

"It's more difficult to do than it was with FRIC, but it's the same thing really."

WHAT HAS RED BULL BEEN DOING? 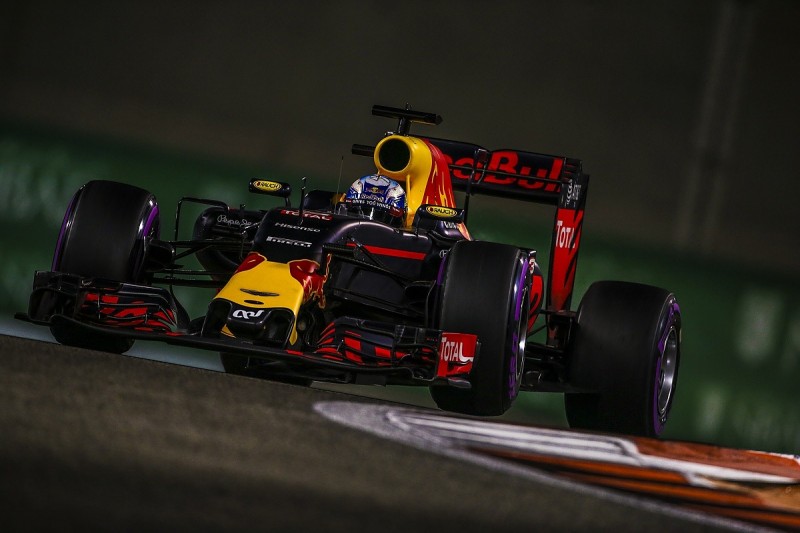 There were rumours last year that Red Bull had also made gains in this area - with it able to have a car with a high rake for aerodynamic benefit in the corners but then sank down at the rear on the straights to minimise drag.

The effectiveness of rake is dependent on a car's overall concept, because adding a Red Bull- or McLaren-level of rake to the Mercedes is no guarantee of more performance if all of the other aero surfaces are not in tune with it.

The use of a well-tuned HPC (Hydraulic Pitch Control) suspension system, as some of the teams have called it, is something that has been part of Red Bull's success throughout 2016 as it overtook Ferrari.

For a team that usually had an abundance of aerodynamic updates at each race, Red Bull was surprisingly quiet on that front last season.

Instead at each GP it honed its set-up, perhaps trialling a different front or rear wing on occasions, in order to maximise the car's operating window.

While it's understood that it sacrificed some of its resource early on to focus on the 2017 car, it's perhaps its mooted acquisition of a full chassis dynamometer that has allowed it to make further strides.

The VTT (Virtual Test Track) as it is known replicates its car in every aspect and allows it to run the car in the simulator loop, including the power unit.

Suspension actuation is also conducted and helps the team to make some decisions about the set-up, both aerodynamically and mechanically, before getting to the track.

This has led to what has been interpreted as a hunching over of the car on the straights, causing a drop in downforce and drag and boosting straightline speed, helping the team to overcome some of the deficit of its the Renault engine.

Red Bull's use of HPC is different in its approach to Mercedes, but both systems are aimed at improving the relationship between all aspects of the chassis to improve overall lap time.

So when Ricciardo was overheard on the radio in Abu Dhabi, talking in detail about the impact of suspension settings, did that trigger a new thought process in Ferrari's head? 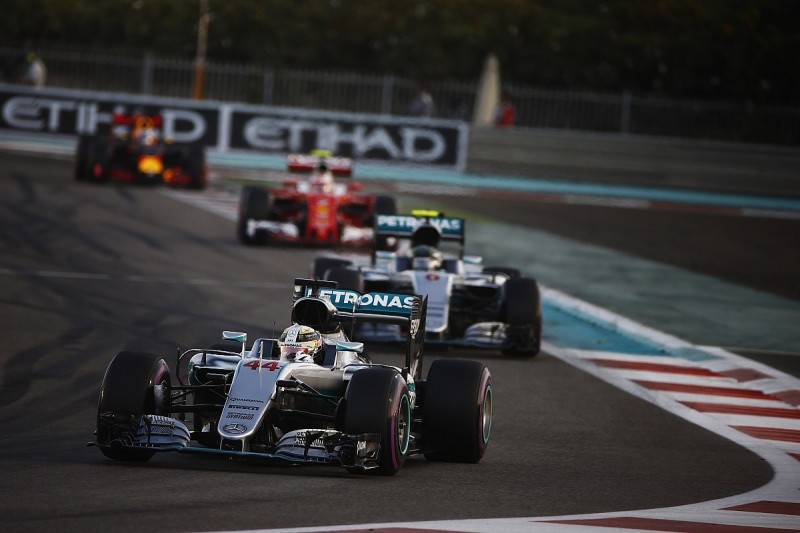 Ferrari's move has obviously led to the pointing of fingers about what Mercedes and Red Bull are up to - but only those two teams know exactly what they have been doing.

The debate about what is allowed is still ongoing with the FIA - but from Mercedes' perspective at least, it remains convinced that the system it ran when needed in 2016 does not fall foul of the FIA's interpretation of a moveable aerodynamic device so there is no impact from the latest ruling.

The feeling is that Ferrari's clarification could have more of an impact on what Red Bull may have been planning for 2017 as it bids to push its suspension system on even further.

That the matter is not closed yet shows that some teams are on the limit of what is allowed - and that leaves Ferrari in a bit of a dilemma.

Does it now push on with its own trick system, does it accept Whiting's interpretation, or does it keep fighting and open up the prospect of a protest at the Australian Grand Prix?

Cast minds back to 2009 when the double diffuser row kicked off and Ferrari's belief that a protest to the stewards in Melbourne about the designs would be enough to get rid of them.

Ferrari may feel like it has dealt a blow to the opposition in Whiting's ruling, but nothing is ever that simple in F1.

Ahead of the all-new cars coming for 2017, the suspension issue is likely to be the first of many skirmishes between teams.