Raikkonen was quicker than Vettel in Q2, on provisional pole after the first runs in Q3 and posted the fastest first and second sectors of the session on his final lap.

The Finn failed to improve in the final sector and only marginally lowered his best time, while Vettel overturned the deficit from the first two sectors to snatch pole by less than a tenth.

Asked by Autosport what happened in the final sector, Raikkonen said: "Nothing really happened. I lost some time, but I don't know. It wasn't like I did some big mistake.

"It was close [to Vettel], close enough to make a difference. Not ideal. Tomorrow's the day, we'll see what happens."

Vettel said he knew he would be able to make a decent improvement after lapping 0.161s slower than Raikkonen on the first runs.

He was "too keen" exiting Turns 3 and 6 on that lap but said the car had been "unbelievable" throughout qualifying and peaked in Q3.

"Right from the first lap in the first part of qualifying I was really happy," Vettel said.

"We didn't really do much on the car, I didn't have to fight to find [the right set-up]. Usually you change quite a lot.

"I knew I had a bit more and the last lap I got it all together."

Valtteri Bottas qualified the best of the Mercedes third, more than half a second off the pace.

Vettel said the gap was a surprise but expects a "long, tough race" between Ferrari, Mercedes and Red Bull, which was slightly slower than Mercedes and locked out the third row.

"To have that much of a gap is a surprise," said Vettel.

"I wouldn't be surprised if tomorrow that gap disappears and it's a very tight race.

"Obviously, I wouldn't mind if it stays there, but I think it will be a tight race among the top three teams." 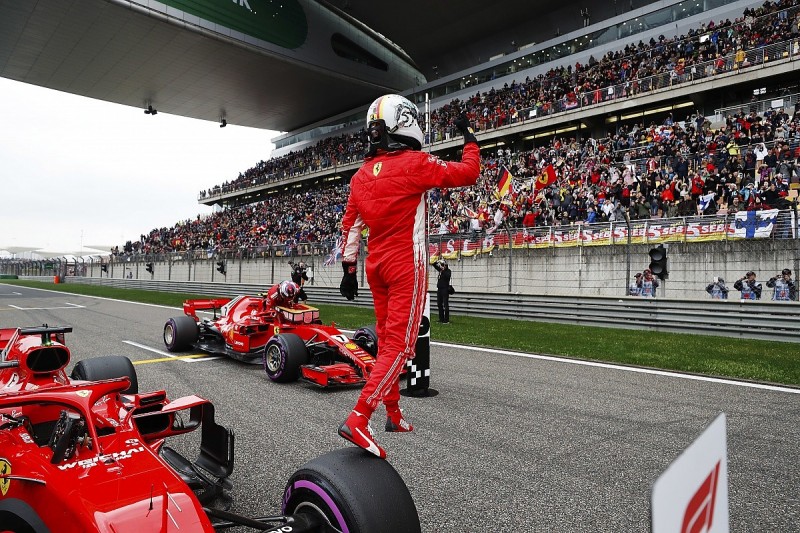