The Rosbergs drove two laps of the principality after the opening practice session for this weekend's grand prix, with Nico in his 2016 title-winning Mercedes W07 and Keke reunited with the Williams FW08 he drove in his championship-winning 1982 season.

Keke's F1 attendance has been sporadic for a long time, even between his son making his grand prix debut in 2006 and winning the title 10 years later.

When asked if it was tough get his father to take part, Nico said: "Of course. He has chosen to avoid the world of Formula 1 press and all that, and so coming here of course it's unavoidable when you are driving the car.

"So, it wasn't so easy. I had to take it very strategically. But now he's really, really happy as well that we did it.

"He really enjoyed it, enjoyed the moment, so that's cool to see as well. That's really nice." 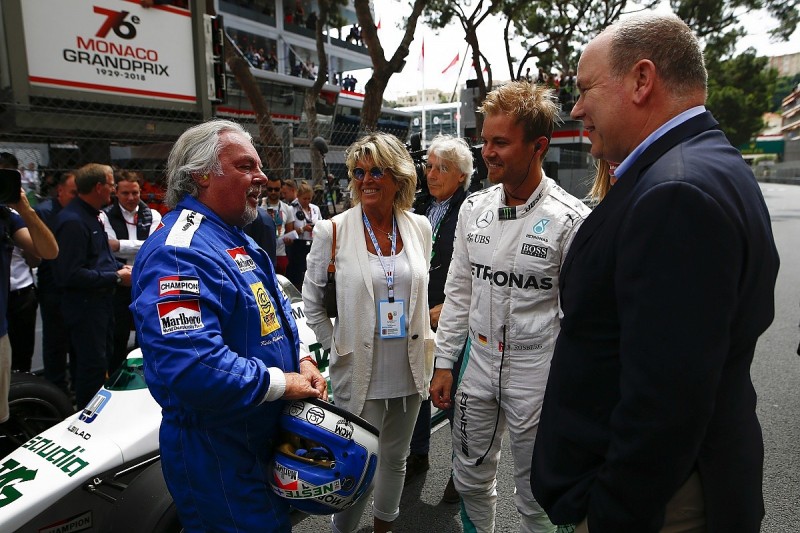 Nico, who locked up both front wheels overtaking his father into the Nouvelle Chicane exiting the tunnel, said he pushed for the demonstration to do something "really special" for himself and his father, as well as fans who love the history of F1.

He said it was a "really wonderful experience" and claimed Keke started to worry him with his corner speed on the second lap, having taken it very slowly on the first.

"The last lap I started to get a bit worried because he started to push a lot in the corners," Nico said.

"I was like: Dad, please, just take it easy, we just need to get to the end now and everything is going to be OK."

After defeating team-mate Lewis Hamilton to win the 2016 title, Rosberg quit F1 a week later and has not raced since.

While he has undertaken other projects - investing in Formula E, establishing a young driver programme and working with his dad's race team - he has always insisted he would not entertain a competitive return.

"Getting into the car and driving out, suddenly I was like back at home," Nico added.

"It was incredible. I've been out for so long and the feeling was I can do a quali lap the next lap and I'd be on it like back in my best days.

"It's always like five seconds when I'm in there and I'm thinking, 'Damn, actually this feels very cool'!

"But then after one minute I'm like: No, no, this is great, great the way it is, and I'm very, very happy."