Force India introduced a heavily-revised car at July's British GP and has since added parts at each of the subsequent races as it strives to optimise the package.

Nico Hulkenberg finished sixth at Suzuka, beating both Lotuses to ensure Force India stayed ahead of its rival in fifth in the constructors' championship.

"Like all cars, when you're constantly updating them, it's not a bad thing to run a stable car for a few races so that you can then optimise it," deputy team boss Fernley told Autosport.

"What I was encouraged about was our race pace. The last 10 laps of the race, we were two of the quickest cars on the track, I think we were only just behind Lewis [Hamilton].

"It is encouraging for Suzuka, which is normally a tough track for us historically but how it translates at other races is another thing.

"We had it under control all the way through. The biggest concern was starting behind both Lotuses - we had to get past both of them - and we did with one car." 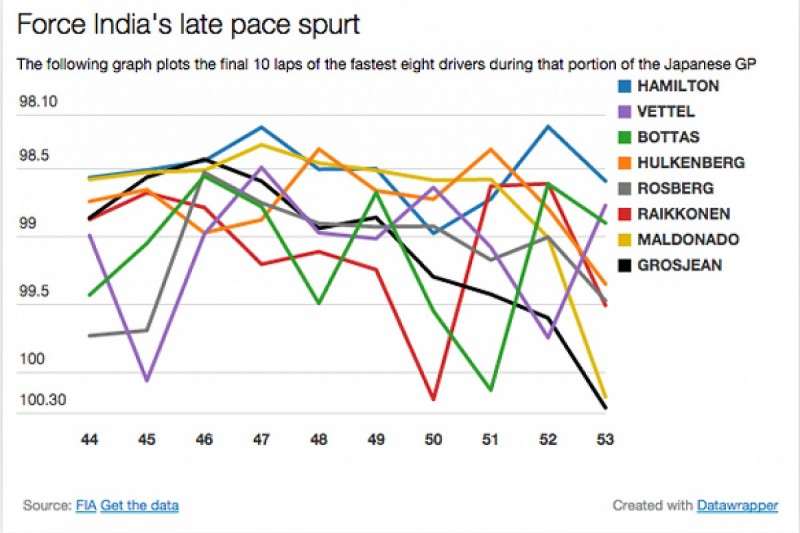 Analysis of the last 10 laps by AUTOSPORT appears to support Fernley's claim that Force India had one of the quickest cars in the closing stages - but there are some caveats.

Ferrari team principal Maurizio Arrivabene said after the race that the Scuderia turned Sebastian Vettel and Kimi Raikkonen's engines down in the final stint.

Mercedes is likely to have run Nico Rosberg's power unit in a reduced mode given that he was in a safe second and needs to do five more races with the same engine if he is to avoid a penalty.

But as Hulkenberg crossed the line in clear air just over 20 seconds behind Williams's Valtteri Bottas and 16s clear of his nearest challenge Romain Grosjean, he too could have had his engine turned down.

The Mercedes, Ferraris and Bottas will also have caught traffic in the closing stages sooner than Hulkenberg and the Lotuses - but the data nonetheless goes some way to showing the step Force India has made.

Meanwhile, Fernley said the Silverstone-based team is still planning on introducing an upgrade for the upcoming Mexican GP, especially as it will prove useful for next year.

"We're working on it," said Fernley. "But there is no point putting something on unless it delivers something we want.

"Next year's car is an evolution of this year's car, so ideally we want to try and get the next upgrade on to do the validation before end of year so we have winter to work on next bit.

"Hopefully that can be Mexico - whether or not it is, we'll see."