Ferrari will not appeal Charles Leclerc’s five-second time penalty, but says it was “very surprised and very disappointed” by the decision that settled the Formula 1 title race.

Max Verstappen clinched his second F1 drivers’ championship in bizarre fashion on Sunday in the Japanese Grand Prix, only finding out in parc ferme after the stewards handed Leclerc a time penalty for gaining an unfair advantage in his fight with Sergio Perez on the last lap.

Leclerc ran deep under braking into the Casio Triangle on the final lap, using the run-off area to negotiate the corner. He stayed ahead of Perez as they crossed the line, but the incident was quickly investigated.

The stewards’ decision to hand Leclerc a five-second time penalty dropped Leclerc to third and meant Verstappen secured the championship, with full points being awarded despite the race barely completing 50% distance in accordance with the regulations.

Ferrari F1 boss Mattia Binotto said he was “very surprised and very disappointed” by the ruling, noting that it took the FIA a long time to decide on Sergio Perez’s sanction for leaving a gap of more than 10 car lengths behind the safety car in Singapore one week ago.

“Seven days after Singapore, where they took so many laps to decide and then after the race, we had to hear from the drivers to take a simple decision which was straightforward, today they took it in a few seconds,” said Binotto.

“[I’m] surprised by such different behaviours between Singapore and here, after only a few days. 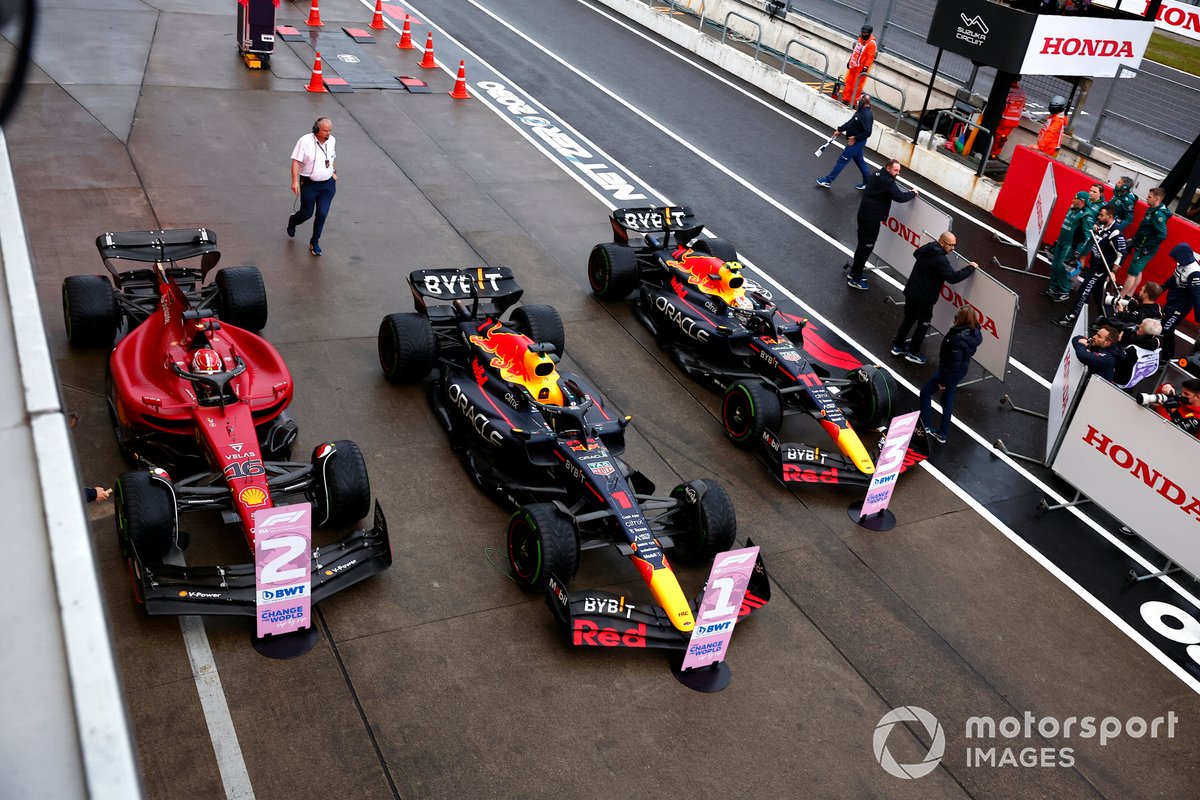 “Was the decision of a five-second penalty right or wrong? In our view, he honestly didn’t gain the advantage. He was ahead, he stayed ahead, he’s got the gap, he kept the same gap. So still arguable, but that is the way they decided, which we will accept.”

Binotto said the difference in the timing by the FIA was “very frustrating to see” in the space of seven days, particularly as there was no chance to speak to Leclerc in Japan before making the ruling.

“If you go straight for the decision as they are obvious, as they should be, then five seconds at least penalty in Singapore should have been given immediately,” said Binotto.

“[This] would have given us the opportunity to manage certainly a lot differently the situation, and it could have been a potential victory.

“So, frustrated and disappointed by that as well.”

The stewards noted in their report that while Leclerc did not gain a position, he was “still deemed to have gained a lasting advantage.”

“This determination takes into account the numerous driver briefings where the Race Directors advised that an ‘advantage’ would be considered as having been gained if you go off track and return in the same position whilst defending,” the stewards said, citing precedents with Zhou Guanyu in Saudi Arabia and Fernando Alonso in Miami.

Why Verstappen was crowned champion despite shortened Japanese GP