Although Leclerc will be entering his third season at the Italian team, while Sainz is about to embark on his first campaign there, Binotto is clear that there is no number one driver.

"There is nothing written in the contract of Charles being the (team) leader," said Binotto.

"I think that the two will be free to fight on track. I think it's important that they are not damaging themselves, that is clear, but I think that they will have equal opportunity, certainly at the start of the season."

Binotto said that Ferrari's priority would always be to maximise constructors' championship points, so any pit wall involvement in team orders would only be on that front.

"Our top priority, as I said in the past and will remain, is to optimise the team's points," he added.

"And by doing the team interest I think we are prevailing and we are helping the drivers' interest as well.

"Later in the season, if there will be a clear advantage of one driver to the other and that one of the two drivers may achieve an objective which is not possible for the other, I think it will be an open discussion between the two.

"Then, let's see how we can eventually help each other but still to the benefit of the team. But optimising the team points is the first priority." 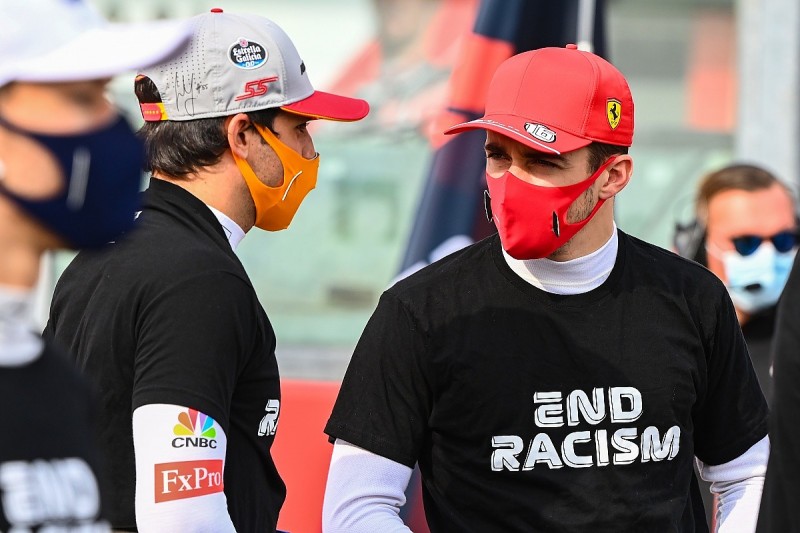 Sainz had his first day at Maranello on Friday, where he was shown around the factory and had an early run of meetings to get to know the people he will be working with.

Speaking about his experience, the Spaniard says the initial experience of being at Maranello was something he would remember for the rest of his life.

"It's the first time in red, which is obviously, as you can imagine, pretty special," he said on Friday.

"It's a special day for me in general. And it's probably a day I will never forget.

"There will be some Christmas and some holidays to disconnect, and to make sure we recharge the batteries as quick as possible.

"But you can be sure I'm going to be here pretty early in January to keep pushing, to keep helping this team to move forward as quick as possible in the best direction.

"I cannot wait to be honest. Today I had already my first meetings, my first look around the factory, and it's something that I will never forget."