Ferrari has faith it has wiped away Red Bull’s DRS advantage to make the top speed differences between their Formula 1 cars ‘negligible’.

The two championship contenders began the 2022 F1 season with very different car characteristics, even though on lap time there was little to separate them.

The Ferrari was better in slow and medium speed corners, while Red Bull held a clear advantage on the straights and flat-out turns.

But, as the campaign has developed, and the two teams have tweaked their cars to counter their main rival, their performance dynamics have converged - with Ferrari as quick as Red Bull on the straights in Austria last weekend.

Ferrari believes that a new low-drag wing that was first used by Charles Leclerc at the Canadian Grand Prix has delivered a decisive step in wiping away the top speed advantage of Red Bull – especially when the DRS was open.

Asked by Autosport if the balance of performance between the two teams had changed now, Mattia Binotto said: “We had a disadvantage compared to the Red Bull, no doubt, in terms of straight line speed - especially in DRS zones.

“In terms of power of their DRS, compared to ours, we worked a lot on it. So the new rear wing that we introduced first with Charles in Canada, we have had it on both cars since UK.

“And with that new rear wing, I think we have simply reduced the gap we had in terms of speed. I think they still have got a slight advantage, but it’s very little or negligible.” 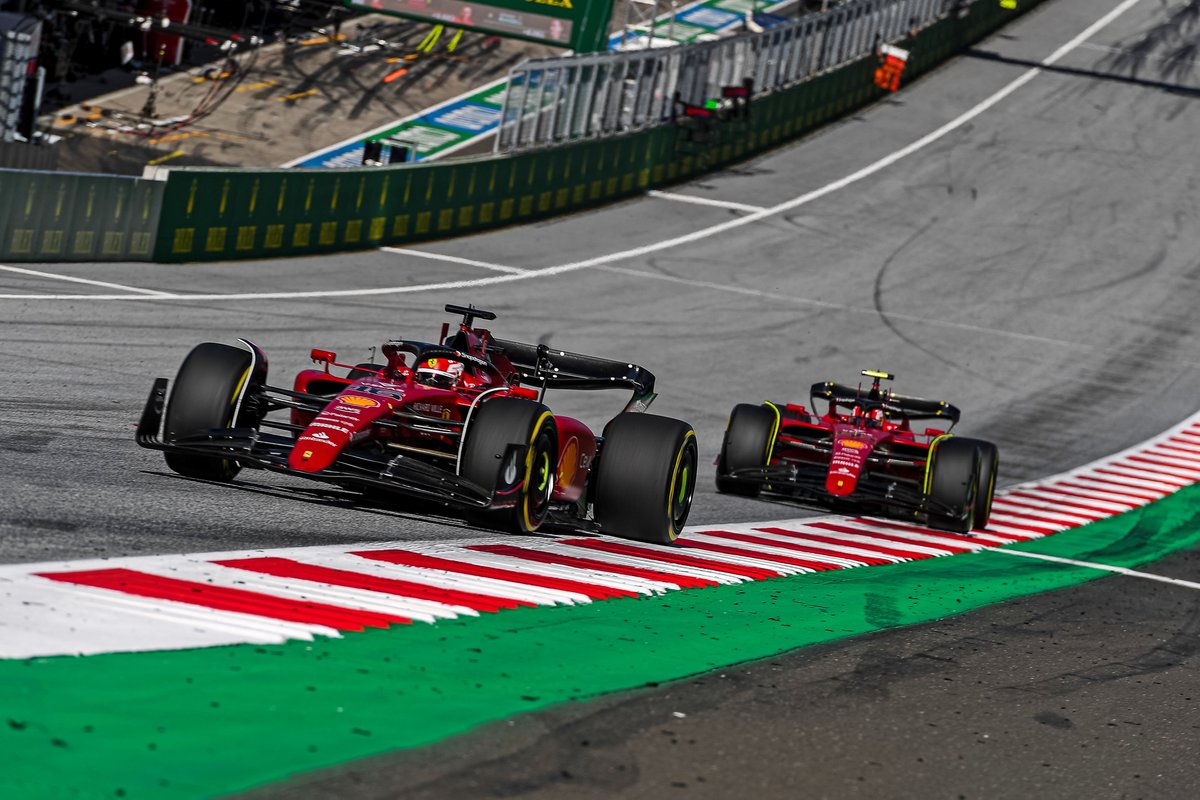 The shift to a lower drag wing, rather than just shedding downforce, has allowed Ferrari to not sacrifice the strength it has had many times this year with tyre degradation.

Binotto reckons that in terms of traction, there is nothing separating the Ferrari and Red Bull. However, he thinks Leclerc and Sainz are better able to exploit a grip advantage their car appears to have.

“In the power limited [corners], we are very close,” he said. “Then it's only about the grip limited corners where we can make the difference.

“I think [in Austria] we have been fast, not only because of the car, but because I think the two drivers made a fantastic weekend in terms of car balance, car setup, understanding the tyres, managing the tyres and driving on track.”

Ferrari’s new low drag rear wing is aimed at performing best on medium downforce tracks, with the team realising that Red Bull’s package had previously given it an important edge.

Speaking recently about the wing, Claudio Albertini, Ferrari race operations manager, said: “It is for the average level of downforce, similar to what we used for example in Miami or Australia, that kind of track.

“So [we are] keeping that level of downforce, and we'll work on the efficiencies to have a more efficient wing rear wing.”

Asked if reducing drag was something the team had targeted by itself, or was a response to Red Bull’s advantage, Albertini said: “With developments, sometimes you realise [things] when you are racing. You can see how you compare to other teams and where you can improve.

“We could see that, for example in top speed, it was an area which there was some room to improve and we improved the efficiency for this reason.”