Brazilian Grand Prix winner Lewis Hamilton believes some of the interruptions to Sunday's Formula 1 race were "pointless", but understands the FIA's desire to prioritise safety

Though Hamilton said some of the decisions made obvious sense, he was perplexed by others - particularly the second red flag after a long safety car period.

"It's understandable with the first red flag because people were going off," said Hamilton.

"The second one, after we went back out, the track was [ready for] inters but the safety car stayed out for ages.

"The track was the same throughout pretty much. It was pointless to have the safety car come out, we could have kept going.

"But safety comes first and they felt that was the case.

"Fortunately everyone is safe so it was the right decision."

"It was on the limit, but in the end they got it right," he said. "They did a good job judging it."

Both Mercedes drivers and third-placed Max Verstappen believe wet races will be smoother in 2017, when the cars gain downforce under new rules and with Pirelli working to improve its rain tyres.

"It's down to the tyres not coping well with the aquaplaning," explained Rosberg.

"We know that and have been working on that now for next year. We're hopeful to make progress."

Verstappen said the level of aquaplaning seen at Interlagos was due to "a combination of having more horsepower, more torque and less downforce.

"Next year that will be solved," he said. "It will be much easier to drive the cars in the wet because of having more downforce on the car." 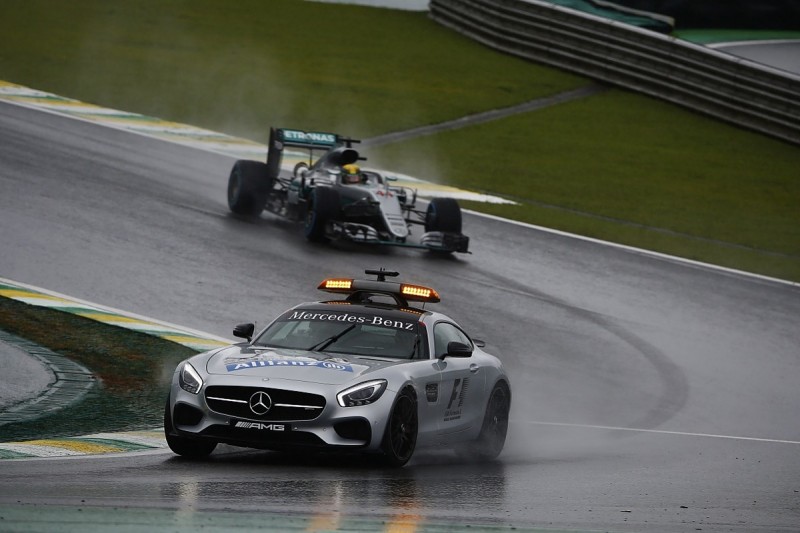 Hamilton added that in terms of actual rain levels this year's Interlagos race had been fairly mild.

"It was probably one of the easier ones, it was a very easy race generally," he said.

"I didn't have any spins, any moments and it was straightforward.

"Silverstone 2008 was way harder than this."

Williams's Valtteri Bottas was among many midfield drivers who criticised the repeated interruptions over team radio.

"I was all the time asking the reason for the stoppage and for the red flags because I was ready to go," he said after finishing 11th.

"It is wet conditions and that means it's more difficult and it's poor visibility etc - that's normal.

"But for me it was completely safe out there all through the race, so I didn't really see why we were stopping so much."