Rosberg won the Japanese GP to open up a 33-point lead but German could not match title rival and Mercedes team-mate Lewis Hamilton for pace in the following final four races of the season.

Hamilton won all four, taking his tally to 10 wins for the season, but Rosberg did enough to finish second in each to take his maiden world championship by five points.

"It's been my best season and I've done my best ever races this year definitely," said Rosberg, who won nine races and only failed to reach the podium five times in 21 attempts.

"The last couple of races, especially the last one, that's not the real Nico.

"The pressure slows you down. It's difficult so I'm happy to have come through in the way that I did.

"Lewis on the other hand had nothing to lose."

Rosberg praised Hamilton, who suffered a series of mechanical failures which hampered his title challenge, for his recent performances.

"The last races have been the best Lewis we have ever seen because he has no pressure," said Rosberg.

"He has been super motivated, super concentrated and working as much as he has ever worked before with nothing to lose. 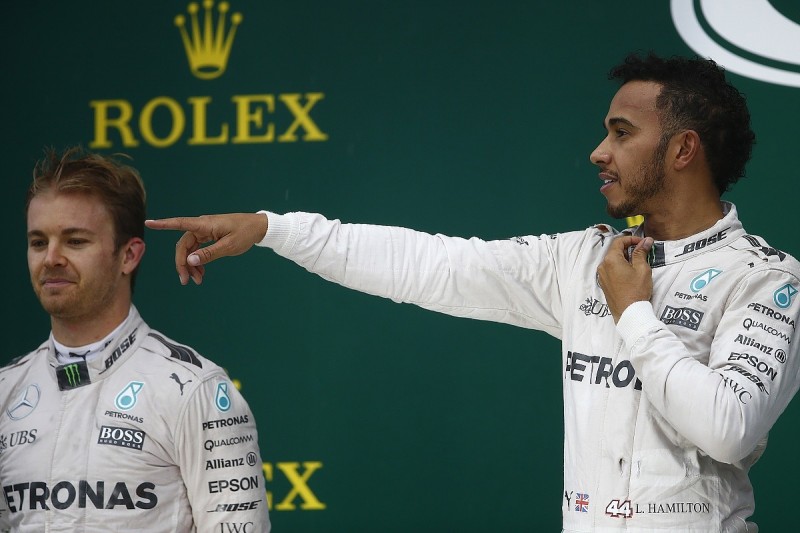 "I have the pressure of being in front and racing against Lewis, that made it even more difficult.

All season long, Rosberg refused to be drawn on talk about his championship hopes, instead declaring he was taking it one race at a time.

The German admitted after winning the title that he made the conscious decision to employ that method after he won seven successive races across the end of last season and the beginning of this campaign.

"The head is an important part of the sport, so I looked into that," he said. "For me, that just seemed the best way.

"If you think too much about the big picture, it will just make you nervous.

"There is so much at stake and the desire to be world champion can weigh on the shoulders.

"It worked well for me to keep it simple, stay right in the moment and not go into any desire as the desire to be world champion is gigantic.

"It is better to stay away from that and just be right here in the moment and it's worked.

"It started during the beginning of the season.

"After winning all those races, it became very clear that it would be completely wrong to now start thinking about the world championship because it's Lewis Hamilton who is my team-mate.