Max Verstappen set the fastest time in a wet third practice session for Formula 1's 2020 Turkish Grand Prix, while Lewis Hamilton did not set a time

Rain had fallen on the freshly resurfaced, low-grip Istanbul track overnight, with more coming down ahead of the 60-minute final practice session and the drizzle continuing as proceedings got underway.

Romain Grosjean and the two Ferrari drivers immediately headed out on the intermediate tyres, with Leclerc setting the first time lap at 1m52.468s - over 10s quicker than the initial laps in the dry FP1 session on Friday.

Alex Albon and Leclerc then exchanged positions at the head of the times over several laps, eventually bringing the quickest time down to 1m50.358s in the Red Bull driver's favour.

But just before the 10-minute mark, Verstappen moved in front with a 1m48.485s - also on the inters.

A few minutes later, the rain increased and several drivers opted to switch to the full wet tyres, but after a few laps most cars were back in their garages.

The initial running featured a plethora of spins and near-misses, with Sergio Perez starting a trend of drivers looping around coming out the Turn 7, long right-hand hairpin - as the rear of his Racing Point came around as he put the power down.

Lando Norris and Carlos Sainz Jr had similar moments, the latter after the full wets on had been put on his McLaren, as did Daniil Kvyat - who also spun off going through Turn 8 at one stage. 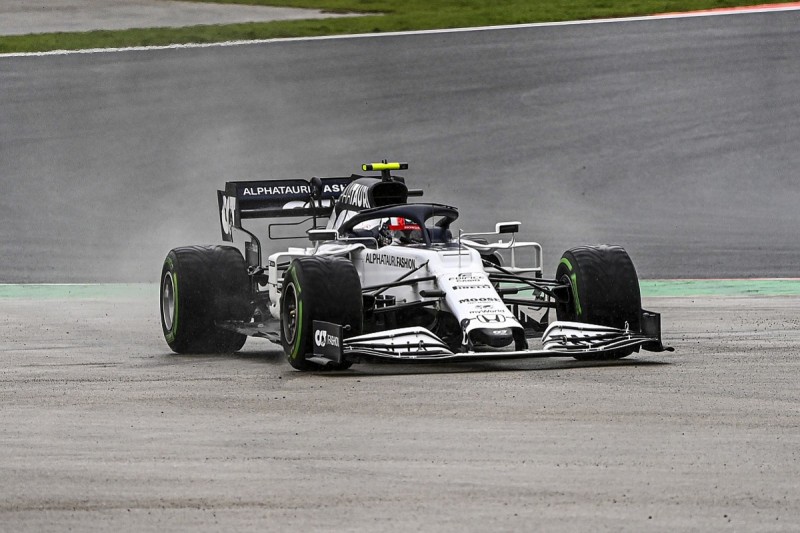 The most bizarre incident involved Leclerc and Esteban Ocon, who was spun around after getting hit by the Ferrari driver at low speed approaching the Turn 12 left-hand at the end of the track's main straight.

Ocon had been following a McLaren, which also had a moment and went off onto the run-off ahead of the Renault, who turned in and got punted around by the Ferrari, which had appeared at his inside.

The incident was not investigated by the stewards during the session.

The rain increasing meant the times did not improve for the rest of the session, although several teams opted to keep their drivers circulating for a while even as the spray and standing water massively increased.

Leclerc and Sainz both had dramatic moments running through the long, uphill right of Turn 2, where they were both fortunate to avoid hitting the barriers.

The Ferrari driver ran wide onto the grass at the edge of the track early in the corner and spun to the inside, just stopping before hitting the barriers front on, while Sainz's off happened further around the corner and a higher speed.

But the Spaniard was able to gather up his McLaren and just keep it out of the barriers on the outside before the entry to the left of Turn 3.

Following this incident, which happened approaching the 35-minute mark, all the cars returned to the pitlane - the track temperature down from 15-degrees at the start to 13.5-degrees.

They remained there for the next 15 minutes before the AlphaTauri and Alfa Romeo drivers were sent out for some final pre-qualifying exploratory laps at very low speed. 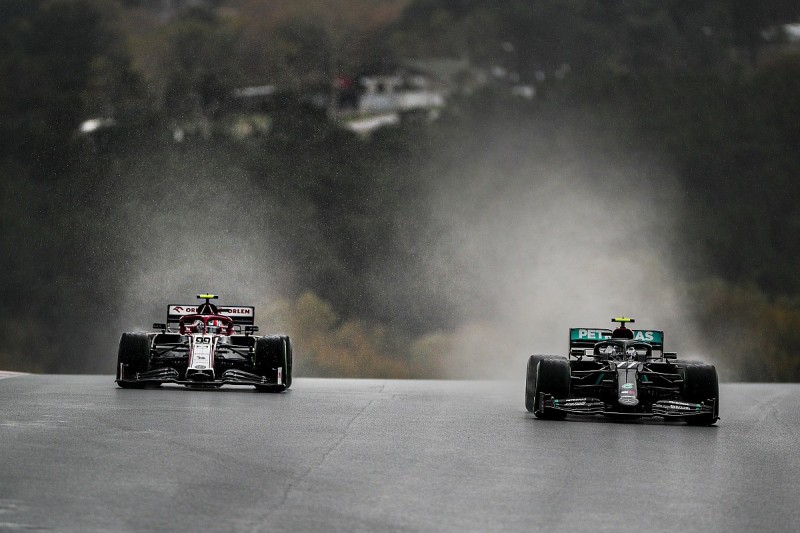 On his outing, Antonio Giovinazzi lost the rear of his C39 at the same spot as Sainz, but he went off even faster and slid sideways along the length of the barrier approaching the Turn 3 entry, damaging his right-front endplate but fortunate not wiping off the whole front wing.

Mercedes also sent its two cars out in the closing minutes but they quickly headed back in before the chequered flag fell.

Verstappen therefore completed a sweep of the three practice sessions, with Leclerc second for the second consecutive session, and Albon third.

Ocon was fourth ahead of Norris, Vettel and Perez, while Valtteri Bottas was the lead Mercedes driver in eighth, and Kevin Magnussen and Lance Stroll rounded out the top 10.

Sainz ended up 12th in the standings, with Kvyat the last of the runners to set a time in P17.

The two Williams drivers and Hamilton did not complete a timed lap, with the world champion initially only taking to the track just past the 10-minute mark as the rain was starting to increase.

He looked as if he would set a time right at the end before abandoning the lap after reporting "shocking" grip levels.