The F1 world championship leader’s 1m27.035s set on the soft tyres gave him a comfortable advantage at the top of the times in the sole practice session before qualifying, as part of the new race weekend format with F1 running its first sprint qualifying race on Saturday.

Norris claimed second for McLaren, with his best lap set on the medium tyres, to leave him over seventh tenths of a second off Verstappen’s leading effort.

Hamilton could only manage third despite switching to the soft tyres late on, trailing Norris by just 0.001s, as Mercedes debuted a series of F1 car updates at Silverstone.

First practice got underway in hot and sunny conditions at Silverstone, with all drivers taking to the track inside the opening couple of minutes of the session with only one hour of track time before qualifying in the evening.

Hamilton set the early pace with a 1m30.048s on his first push lap on the medium compound tyres, two tenths faster than Verstappen on the hard tyres, with both Mercedes drivers running planned upgrades for the first time.

After an initial run on the hards, both the Red Bull drivers switched to the mediums to see Verstappen set a new benchmark of 1m28.179s – over half a second faster than team-mate Sergio Perez.

Verstappen went four tenths of a second quicker moments later, having complained of a drop in power over his team radio on a previous lap, before pitting to switch to the soft tyre running.

The Dutch driver put in a 1m27.035s on his first push lap on the softs to initially pull out over a second on team-mate Perez, until McLaren’s Norris slotted into second place but did stick to the medium rubber seven tenths back. 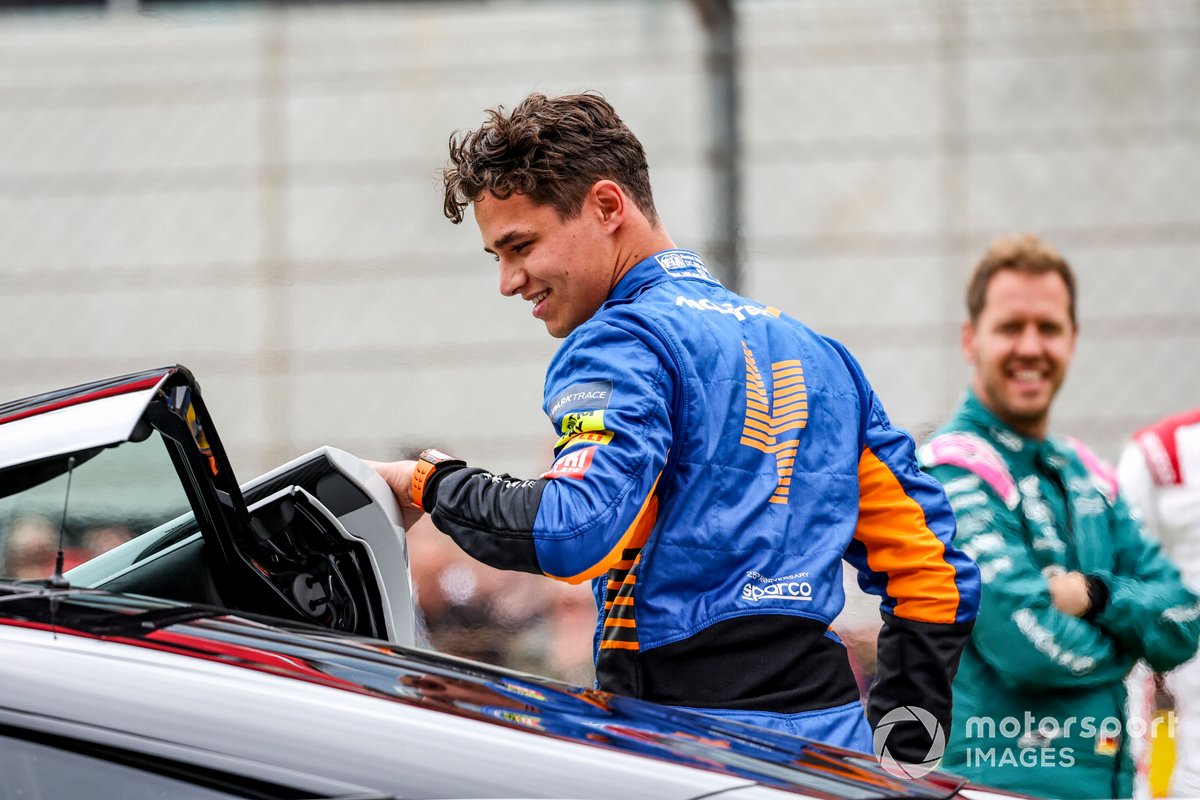 The majority of the teams left the switch to soft tyres to the final 15 minutes, including both Mercedes drivers, with Hamilton moving up to third place just 0.001s slower than Norris but a significant seventh tenths off Verstappen’s best lap – resulting in a bemused reaction from the British driver.

Ferrari also left its soft tyre laps to the end of the session, to see Charles Leclerc move up to fourth place and push Bottas into fifth place for Mercedes.

After a mid-session spin at the exit of Village corner, Carlos Sainz Jr ended the session strongly to take sixth place, with Aston Martin’s Sebastian Vettel taking seventh place ahead of the second Red Bull of Perez.

Daniel Ricciardo continued to see a significant margin between himself and McLaren team-mate Norris, with the Australian driver only ninth fastest as Esteban Ocon rounded out the top 10 for Alpine.

AlphaTauri pair Pierre Gasly and Yuki Tsunoda both had a low-key session in 11th and 12th respectively, ahead of Alfa Romeo’s Antonio Giovinazzi, with Fernando Alonso in 14th place.

With Nikita Mazepin in 19th place for Haas, George Russell ended the session the slowest driver, but the Williams driver did have his best lap time deleted for exceeding track limits and suffered a broken left mirror.

The F1 drivers and teams will now prepare for qualifying later today at 6pm local time, which will set the grid for the first-ever sprint qualifying race.