Max Verstappen led Valtteri Bottas at the top of the times in final practice for Formula 1’s 2021 Austrian Grand Prix, with Lewis Hamilton third after losing his best time.

In bright sunshine compared to the overcast running on Friday, FP3 featured much hotter conditions, which meant the drivers struggled to keep the softer tyres alive – particularly at the end of the lap, where Hamilton’s best time was deleted after he ran too wide out of the final corner on a late flying lap.

In any case, the gap to Verstappen was still considerable as Red Bull returned to dominating at the head of the pack after Mercedes ended the opening day of practice on top.

After Nikita Mazepin had completed the first timed lap of the one-hour session – a 1m11.974s – Lando Norris established the first place benchmark at 1m06.454s.

The majority of the runners that headed out in the early stages did so on the prototype, unmarked medium tyre Pirelli has brought to the weekend, as the teams opted to save their weekend allocation of event tyres ahead of qualifying – where it is likely the medium tyre will be key to getting through to Q3 to gain a strategy advantage at the start of the race.

Gasly’s AlphaTauri team-mate Yuki Tsunoda then forged ahead on a 1m06.045s, which stood as the fastest time until 25 minutes had passed, when Norris completed the first run on the soft tyres.

The McLaren driver had had to abandon his first flying lap on the red-walled rubber after climbing over the kerbs exiting Turn 1, but his next flier was a 1m05.762s, which he beat on third run at this stage the next time by – a 1m05.700s. 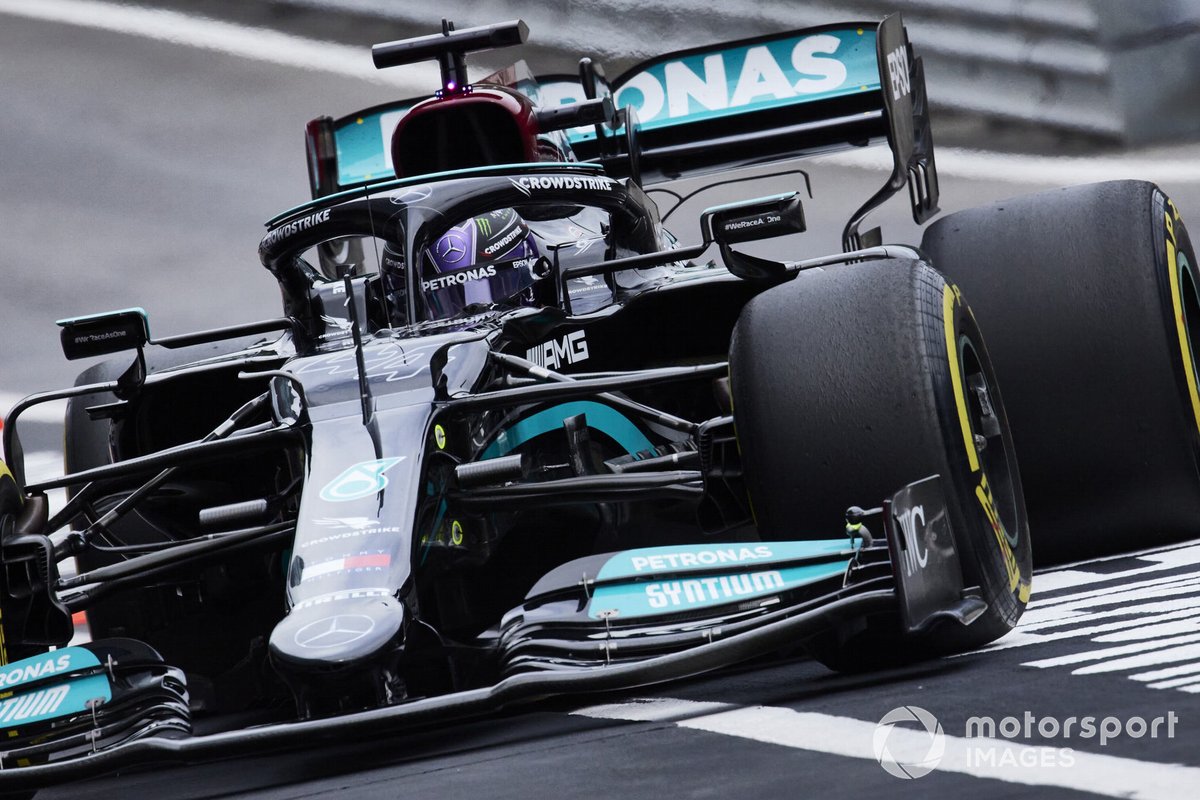 The Mercedes drivers had joined the pack running the test tyres in the first half of the session, while Verstappen remained in the Red Bull garage until just before the halfway mark.

Red Bull sent him out on the soft tyres immediately and he duly went quickest with a 1m04.941s that featured then fastest times in the second and third sectors.

Nearly 40 minutes had passed before the Mercedes drivers went for their first runs on the softs, with Hamilton moving into second but ending up 0.491s adrift of Verstappen after losing time early in the lap as he hit the kerbs heavily exiting Turn 1 and then going deep at the tight, uphill right of Turn 3.

The leaders went for a second qualifying simulation run with 10 minutes to go, where Verstappen improved the fastest time to a 1m04.591s.

Hamilton had just dipped into the 1m04s bracket a few moments, but his 1m04.994s – still 0.403s slower than Verstappen’s best effort – was deleted as he had briefly run beyond track limits exiting the final corner.

That bumped Bottas up to second with his 1m05.129s, which would have been third best had Hamilton’s time stood.

Gasly ended up fourth ahead of Alfa Romeo’s Antonio Giovinazzi and Ferrari driver Carlos Sainz Jr, who slipped off the road at the final corner around the halfway stage – noting that his softs “gave up on me in the final sector”.

Sergio Perez ended up seventh in the second Red Bull, the Mexican driver setting his personal best as the chequered flag fell as he ran a different run plan to Verstappen, which included a series of laps on the hard tyres in the early stages.

Fernando Alonso finished eighth ahead of Charles Leclerc – who was one of several drivers including Bottas and Mazepin, who had moments in the gravel exiting the long, downhill right of Turn 4 – as Sebastian Vettel rounded out the top 10 for Aston Martin.

Turn 1 was another area where the drivers found the going tricky, with a series of offs taking place at the 90-degree right hander, while Tsunoda had a big sideways moment between the final two corners just before the halfway point.

The AlphaTauri driver ended up completely sideways and went off onto the grass beyond the runoff area at the final corner, but was able to gather things up and escape, eventually ending up 12th in the standings.