F1 2017: Lots of homework to do with new rules - Sebastian Vettel

Sebastian Vettel believes there remains "a lot of homework to do" for Ferrari, Red Bull, Mercedes and Pirelli ahead of the 2017 introduction of the new wider tyres into Formula 1

Vettel was the first to sample next season's rubber when he drove a modified 2015 Ferrari at Fiorano at the start of August, initially completing a few installation laps on slick tyres before predominantly focusing on the wet compounds.

Vettel concedes, however, there were issues with the car given the modifications and the attempt to replicate the levels of downforce due to occur next year.

The four-time champion understands former team Red Bull experienced similar problems when it tested at Mugello later in the week.

"It was an interesting experience," said Vettel.

"I was able to get a few laps in the dry before we switched to wet tyres.

"They looked quite different, felt a bit different, but there is still a lot of stuff to do.

"A lot of homework to do for Pirelli, but also the teams because we drive with a modified car.

"As you can imagine, the first day on the track we had some difficulties, but all in all we did a few laps and got an interesting feel." 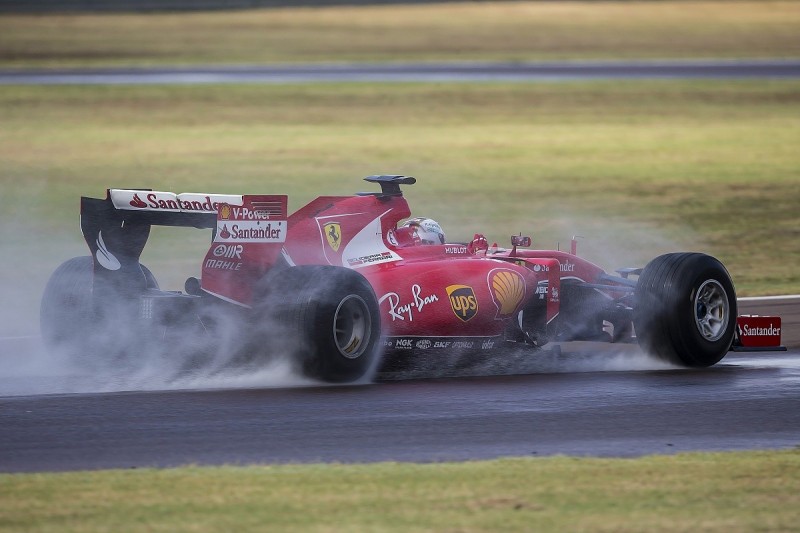 Vettel is confident he will be able to gain a greater understanding of the tyres at the next test for Ferrari that is due to take place at Barcelona on September 6-7.

"The first test was held in Fiorano, and it was mostly wet, and we don't have that many races in the wet where we suffer lots of degradation," said Vettel.

"We're not fully there yet. Red Bull had a test the same week [in early August] and had similar issues, so we'll have to wait and see.

"But as a first shot it was interesting. The cornering speeds should be quite a bit different.

"Since we don't run that much in Fiorano, I'm waiting to get to Barcelona and see how much the difference really is."

Vettel is scheduled to be involved at the Circuit de Catalunya as he feels it is important ahead of the changes for next year.

"I like driving, I don't mind, so I'm going to be back in the car in Barcelona," added Vettel.

"It's interesting being part of a process, although as I said there is plenty of homework to do on the tyres.

"The cars are different, but to be completely frank, any opportunity you get to drive the car, I'm up for it."