Daniel Ricciardo has no regrets over his clashes in Hungarian GP

The Red Bull driver, who took an opportunistic victory at the Hungaroring last year, had to settle for third place in 2015 after pitting for a new front wing following a collision with Nico Rosberg as they battled for second at the first corner.

That came after his car had earlier sustained damage to its sidepod and floor when he tried to pass Lewis Hamilton around the outside into Turn 1 and was hit by the reigning world champion.

While Ricciardo eventually missed out on a shot at race winner Sebastian Vettel in the closing stages and also lost out to his team-mate Daniil Kvyat for second, he said he was pleased with the way he attacked.

"I left everything on the track," said Ricciardo, who also made contact with Valtteri Bottas's Williams on lap one.

"Whether some competitors like it or not, that's how I like to do it and how I'll always do it.

"I feel all my moves on track were...I was inspired today.

"I could have sat in third and accepted that, but I had the chance to win and I went for it.

"It's a shame how it ended up but at the same time I don't regret what I did."

Ricciardo said he was determined to put in a special performance following the death of Jules Bianchi a week before the race.

"I felt I drove with a heavy but a strong heart and that makes me happy," he said.

"This race was definitely for Jules - watching Jules grow up that's how he did it.

"It's been an emotional week, and this one is definitely for him." 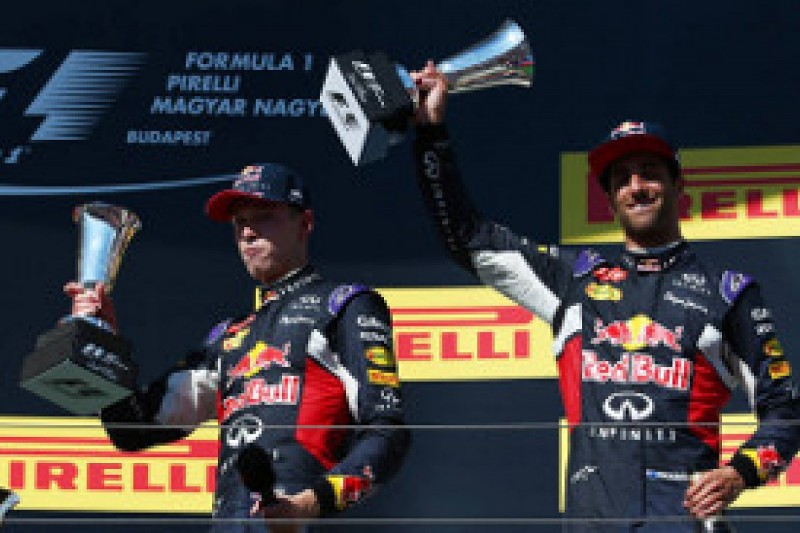 Kvyat took advantage of the incidents ahead of him to finish second to Vettel, scoring his first F1 podium.

"It's hard to describe what I feel today," said the Russian.

"Today I learned never to give up whatever happens - others were fighting around me and I found myself in second.

"Daniel had a better shot at victory than I did - he did the right thing to go for it.

"This weekend I have been able to take every opportunity, and that's why I'm here now."