Daniel Ricciardo has received a three-place grid penalty for his home Formula 1 race, thanks to a red flag infringement in second Australian Grand Prix practice

The Red Bull Racing driver was found to have failed to stay above the minimum time set by the FIA ECU in the second-last and last 'mini marshalling sectors' when the red flag came out so debris could be retrieved.

As a result, he was handed a three-place grid penalty and two penalty points.

According to the stewards' report the penalty was softened as Ricciardo slowed down to a degree, and no 'danger was created'.

"The stewards reviewed the data and video and found that Ricciardo did in fact fail to stay above the minimum time set by the FIA ECU in the penultimate and final mini marshalling sectors," read the report.

"The stewards also found that Ricciardo slowed by as much as 175km/h from his fast times at Turn 12 and was consistently and significantly slower in the final three turns, indicating that he was fully complying with the requirements of appendix H of the International Sporting Code.

"However, he admitted an error in reading his dash and was slightly below the minimum time.

"As the regulation states, art. 31.6 was added this year to ensure that drivers reduce speed sufficiently during a red flag. Breach of this regulation is seen to be an extremely serious matter.

"The stewards therefore are imposing a lesser penalty than usual, and impose a three grid place penalty and two penalty points." 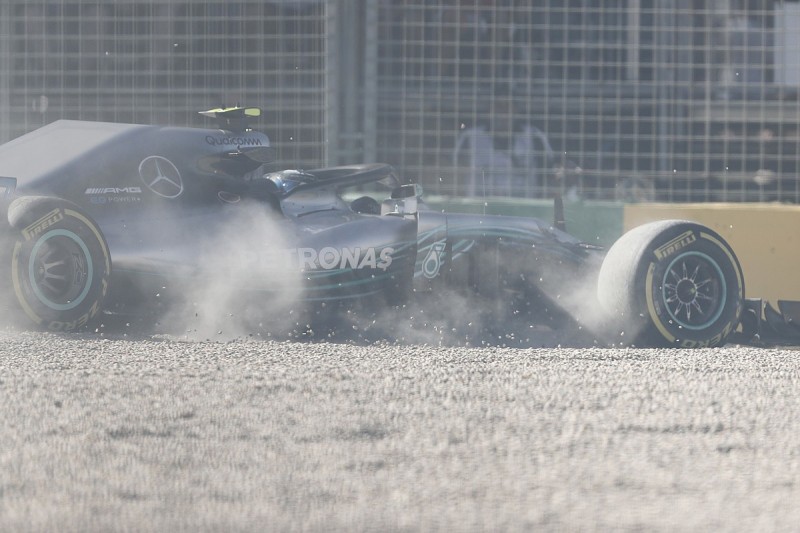 Bottas was caught out by a slow-moving Raikkonen on the run into Turn 3 early in the session, the Mercedes driver locking up and taking to the gravel to avoid the Ferrari.

While Raikkonen was found to have 'clearly impeded' Bottas, it was determined that it was not 'unnecessary impeding' which means Raikkonen avoids a penalty.

Raikkonen put the incident down to not seeing Bottas.

"I didn't see him. I kind of knew there was someone but I couldn't see him at all," he said.

"I saw the smoke and I knew there was someone, but I didn't see him at all.

"For sure not ideal for him but there's nothing that I could see."

Bottas added that the turbulent air from behind the Ferrari played its part as well, and stated even before the verdict had been handed down that he was not expecting Raikkonen to get a penalty.

"I was kind of expecting him to move away," he said.

"I think he was on a cool-down lap, but he was on the line and when I got close enough I lost some downforce in the turbulent air and I had a lock-up."