After an impressive start to his 2021 Formula 1 season, Lando Norris currently splits the Mercedes and Red Bull domination in the early drivers’ standings. While the McLaren driver has played down the likelihood of maintaining that position, his team remains optimistic that his form can lead to greater success.

The 2021 Formula 1 season could hardly have got off to a better start for Lando Norris, who three races into the season lies in third place in the world championship.

The McLaren youngster has finished fourth, third and fifth in the opening events, and thus far has only been beaten to the flag by drivers from the Mercedes and Red Bull teams.

In addition he outran Sergio Perez in the first two events, and was well ahead of Valtteri Bottas when the Finn crashed with George Russell at Imola, a race where Norris was also able to hold off the recovering Lewis Hamilton for several laps before securing the second F1 podium of his career.

In other words, he’s achieved as much as any driver from a team outside of the two frontrunners can hope for - he’s led the chase and been able to take advantage when one of the top-four drivers gets it wrong.

For Norris to outperform all the other “midfield” runners so consistently, including his own team-mate Daniel Ricciardo, is a clear indication of the progress the 21-year-old has made. No longer a rookie, he’s entered his third season with the Woking team having gone up a level.

He’s demonstrated that he is now a genuine top talent who, when he gets his hands on a truly frontrunning car, will be capable of winning races and titles.

“Again this weekend he simply continued what we have seen from him in the first two race weekends,” his team boss Andreas Seidl said after the Portuguese Grand Prix.

“He’s pulling it off when it matters, he's at one with the car, with the team. I think today, again, he drove a brilliant race, doing great manoeuvres, great overtaking moves also.

“He always kept giving his engineering team the overview in order to make sure you execute the tyre strategy also in the right way. And I would say he had the race under control at any second of this race, and that's obviously great to see.” 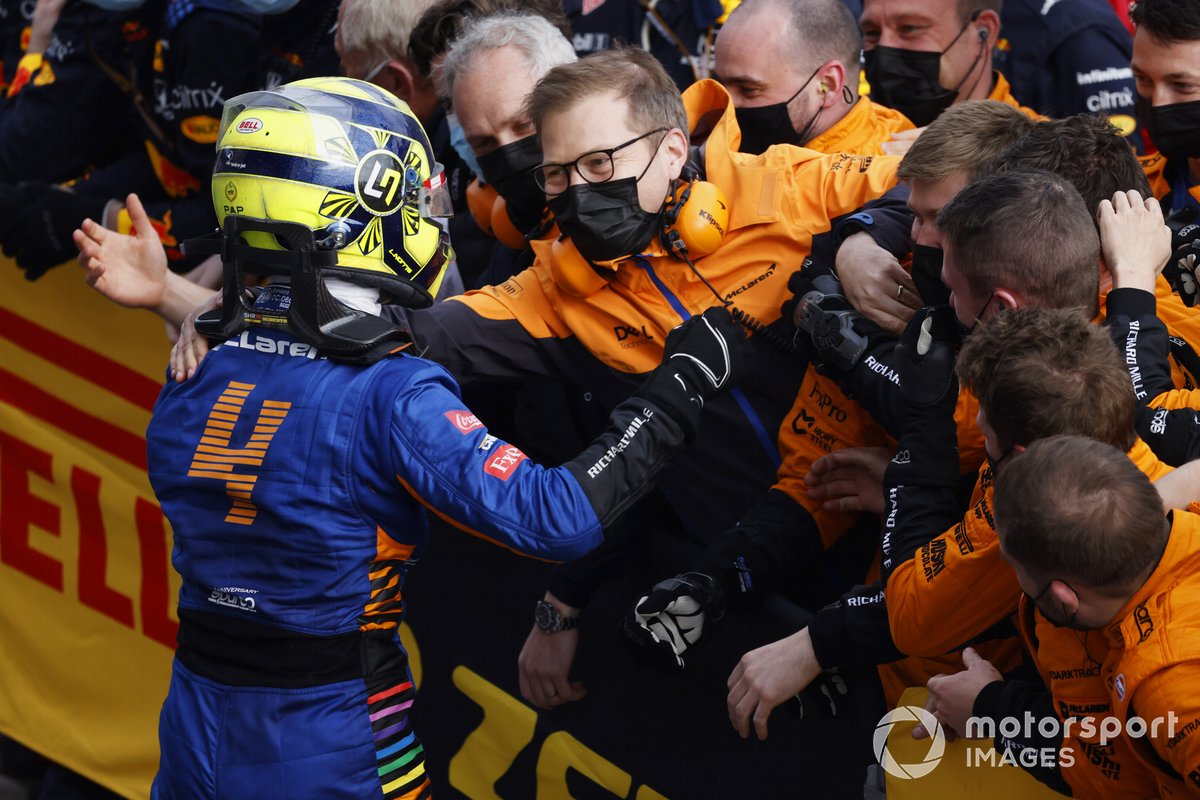 Portugal was a case study of Lando Norris, 2021-style, making decisive moves at both the start and the restart, and not putting a foot wrong throughout.

“The first one was just a good battle with Esteban,” he told Autosport just after the flag. “I got him in the first few corners, he got me back again. And then I got him with quite a good move in Turn 11. So a good little battle.

“And then I got two cars on the restart, I got Carlos, because I kind of saw him battling with Sergio in the first couple corners.

“So I was able to kind of sit back a little bit, prepare my line and have a good opportunity to get ahead of both of them, which I managed to do. Sadly, we don't have the pace to stay ahead of a Red Bull just yet.”

The pass on Perez triggered a little controversy, with the Mexican telling his team that it involved abuse of track limits.

“From what I did what I thought I was fine,” Norris insisted. “I have to see it from an onboard and from the T-cam or something. I went to the inside, if I went off, I would have gone to the outside of him or something.

“So it's tricky, especially over Turn 4 you get the wind change, I was very close to him, so it's difficult in the dirty air as well. But at the end of the day, he was a long way ahead by the end of the race. So I don't think it made too much of a difference for him or me.”

At one stage Norris was heard telling his engineer not to interrupt him, which the British driver explained was to allow him to focus on the tricky Portimao track.

“I mean, it's such a difficult track like this, because of the wind, because it's so easy to lock up, and I was doing a long stint on the mediums, as soon as you go over one bump and you make a mistake or you lock up it can be game over.

“Some tracks I'm okay with them talking and giving me a lot of info, but here I had to concentrate, and Charles [Leclerc] was pushing me a lot that second stint. And I was having to manage the tyres a lot, but also push very hard. So it was not an easy second stint for me. 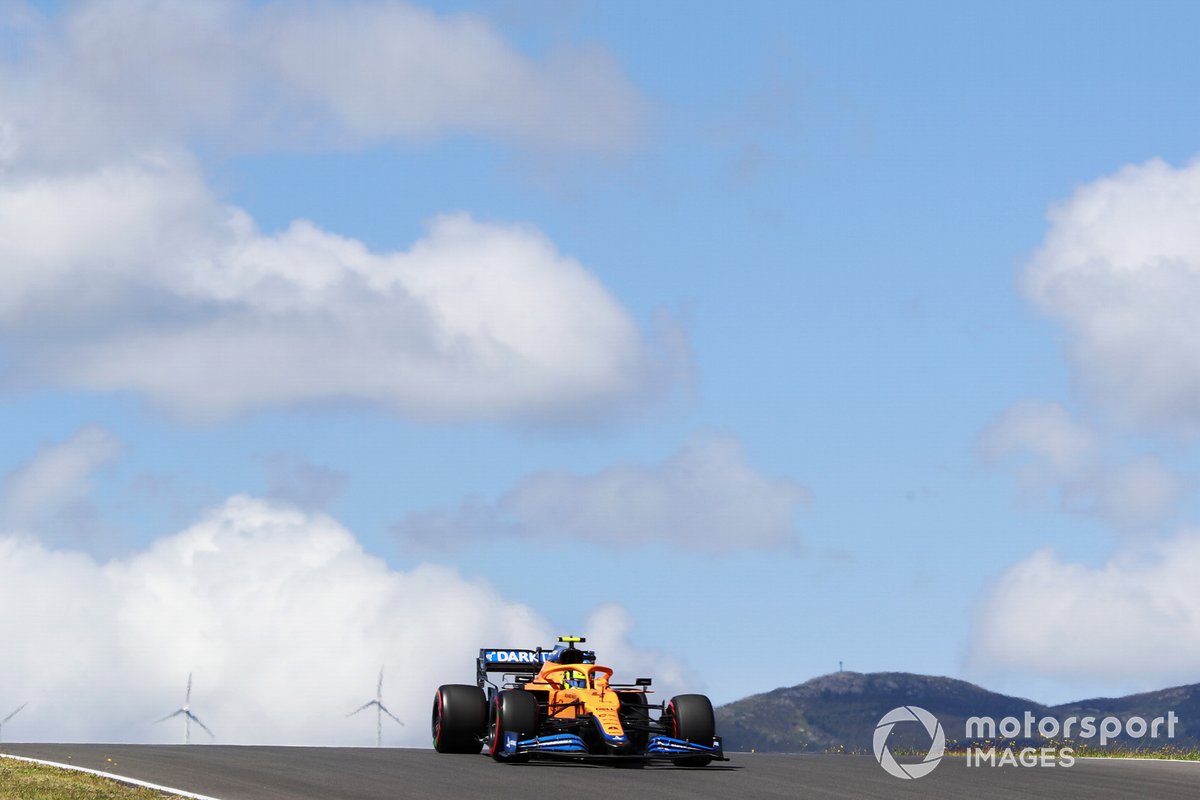 “It's nice to have that info sometimes. But it's also nice for me to just to focus on my own job. And I have mirrors, so I can see when he's catching me or not , and things like that. So it's preference, sometimes I'll ask for more info, sometimes I'll tell them to shut up.”

Norris and the MCL35M have been competitive at three different tracks thus far as attention now moves to round four in Barcelona this weekend.

“We'll see," he said of the car's potential in Spain. "I think today, we were probably a little bit better than we were expecting. More so after [qualifying] yesterday, we struggled a little bit, and Alpine were very fast.

“We're doing a good job, but it doesn't mean we're going to be there every single race. I think we've seen how much Alpine improved this weekend comparing to Imola.

Ever the team player Norris said “we”, but it’s very much him banging in those sensational performances as everything starts to fall into place. He agreed that he’s been driving better than ever.

“I definitely feel like I'm doing the best job I've done. And probably these first three races all together have been better than any other race I've done,” he said.

“It all starts on Friday, with the preparation side of things, executing my laps in qualifying, not making the mistakes, being attacking in those opening laps. 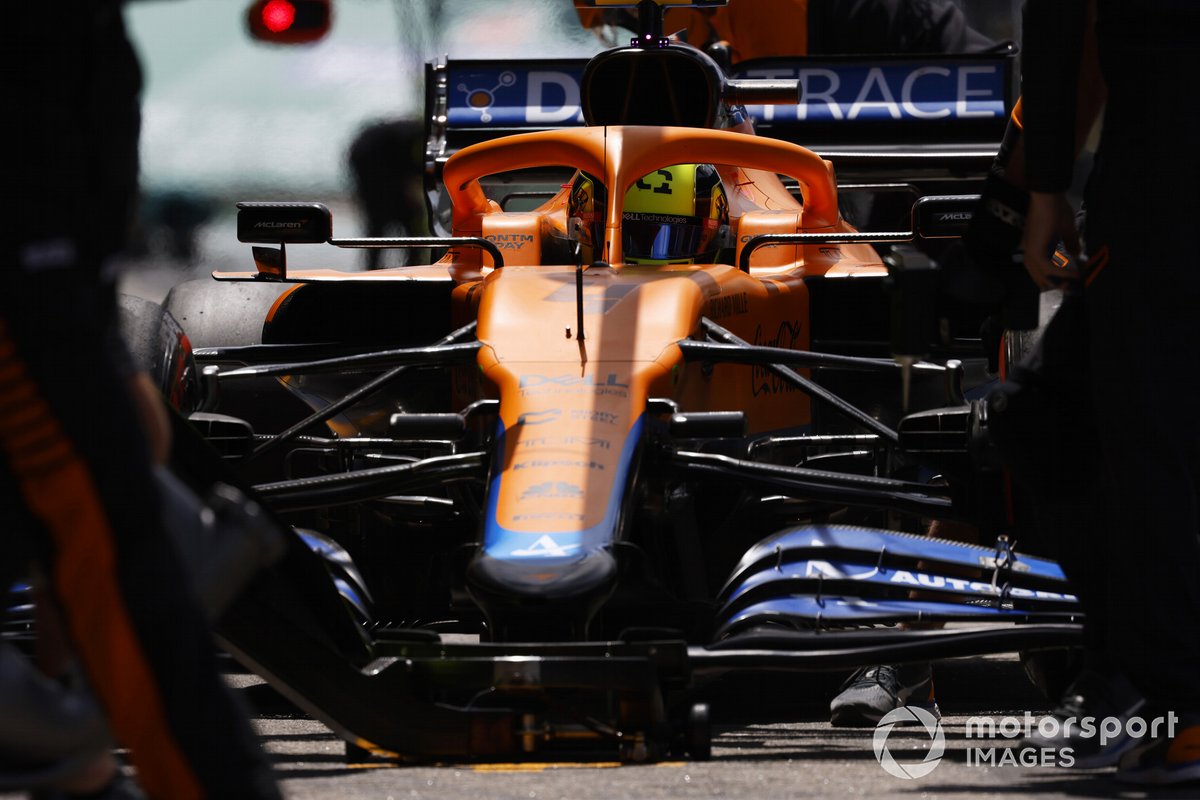 “I started P7 and I got to P4. And that was not just because I was quick, but because I did a better job with the racing, preparing myself with the lines, and things like that.

“I'm confident, or let’s say I’ve got some confidence, and at times last year, and in year one, I struggled with that. And I think now I have a better amount of it.

“Sometimes I'm still not confident with the car and with myself, but definitely higher and in a better position than I have been. So that helps.”

At first glance the one weakness in 2021 has been qualifying, with his grid positions – he’s started seventh in all three races – leaving him with a bit of extra work to do on Sundays. However it’s easy to overlook the fact that at Imola a few centimetres off the “legal” line cost Norris third on the grid.

“I think it's important to look at how the qualifying sessions went, when you just look on Lando now,” Seidl noted in Portugal.

“If you look at Imola, without the track limit issue, I think he could actually show his potential. On the other hand, if you don't get the lap because of a track limit infringement, it's where you end up, and you deserve to end up then in a P7.

“I think Lando and the car have shown the potential there as well. So I don't see a mismatch there, compared to what we see on Sunday.” 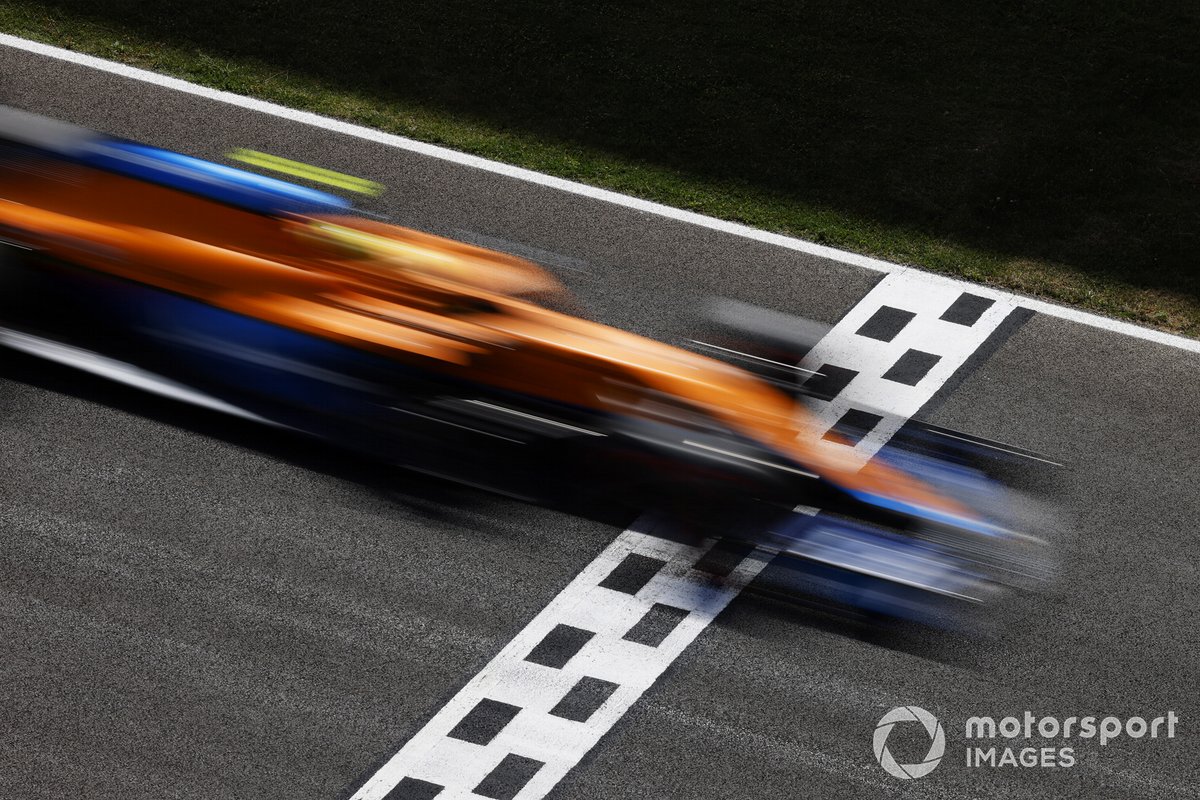 Logic suggests that over what is scheduled to be a 23-race season Norris is unlikely to stay ahead of Bottas and Perez in the points. But can he start to target fifth place, and best of the rest?

“No, it's way too early for that,” he stressed. “I'm doing what I can. But I think like what we've seen over the first few races, we have opportunities to do it. And when they make mistakes, we can be ahead, like in Imola. [Perez] had the pitstop penalty, and things like that, then we take advantage of it. And when I overtook him today, we could take advantage of it.

“But we can't always back it up on our pace that we have. So we're making the most of the opportunities at the moment. But we definitely need just a little bit more pace and performance to be able to do it consistently, or be confident with it.”

Norris might downplay the suggestion of fifth place, but Seidl thinks it’s still possible to aim higher, and through consistent scoring possibly beat Bottas or Perez.

“Well, there's always a chance,” said the German. “But again, it's simply important that we, together with Lando, keep delivering weekend-by-weekend. Consistency is king, together with performance obviously, in order to outscore cars that on paper, and in reality, are definitely quicker than us.

“But if we keep delivering upgrades to the car, if Lando together with his team keeps doing what he did so far these first three races, it will end up in keeping the pressure up on these guys ahead of us.

“And then there will be opportunities to finish races in front of them also for sure this year, and then there's always a chance.

“But at the same time you need to be realistic, if these guys get their act together each weekend, then we simply have to acknowledge or accept we are not there yet in terms of performance.” 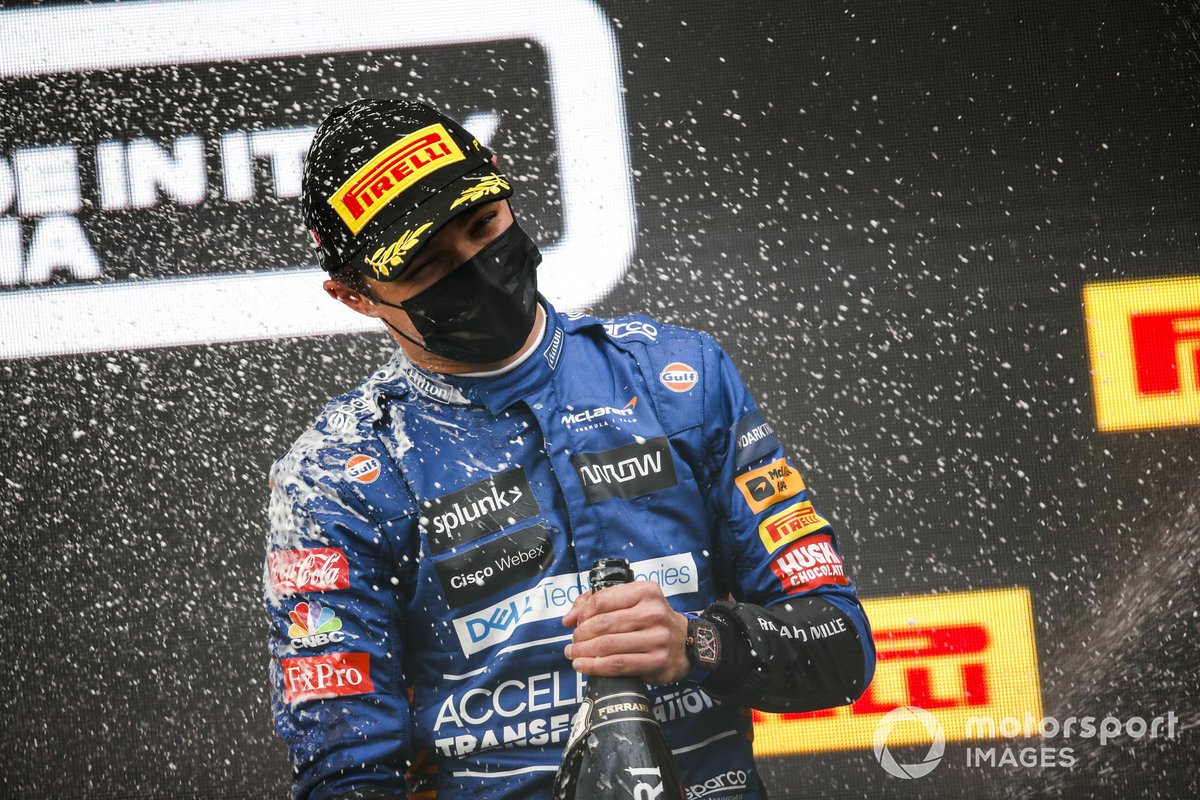 Lando Norris, McLaren, 3rd position, on the podium with Champagne