Lewis Hamilton completed a clean sweep of fastest times in practice ahead of the British Grand Prix, with the final session blighted by a heavy shunt involving Sauber's Marcus Ericsson

Hamilton had just set the quickest time of the weekend to date at Silverstone, with a lap of 1m31.234s, when Ericsson lost control of his car on the exit of Stowe with 22 minutes of the hour-long session remaining.

Ericsson skidded across the track and grass before spearing into the inside barrier nose first, a hit that dislodged the steering wheel in the process, spinning him around before he finally came to rest back on the track.

After the wrecked car was cleared and returned to the pits on the back of flatbed truck, lengthy barrier repairs were undertaken that led to the session being unable to restart until five minutes before the end. 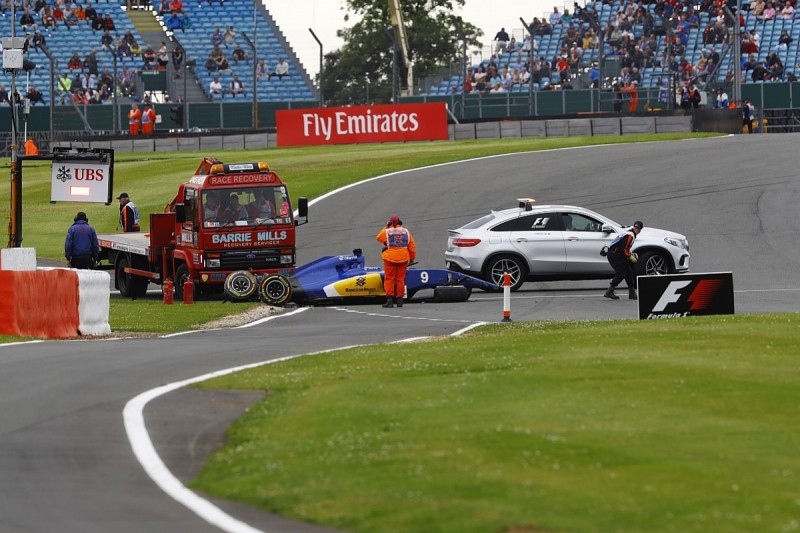 That was enough time for what turned into an effective qualifying session, one 'won' by Hamilton with a 1m30.964s on a set of new soft tyres, beating Rosberg by 0.063s.

The duo were again comfortably ahead of the rest of the pack, spearheaded by Red Bull's Daniel Ricciardo, but 0.584s adrift, followed by team-mate Max Verstappen, a further 0.073s down.

Sebastian Vettel took fifth spot in his Ferrari, albeit 1.145s off the pace, with the German driver ending the session with a worrying message back to the team saying "OK, I think we failed the gearbox again," as he gesticulated in the car at the end of his final lap.

A rain shower 30 minutes before the green light for FP3 - that swiftly passed through - led to a damp start.

The majority of drivers performed exploratory laps on intermediate or wet tyres, and it was not until 14 minutes in that Force India duo Sergio Perez and Nico Hulkenberg became the first to venture out on slick rubber, both using the mediums.

It was Rosberg, though, in need of track time after sitting out all of FP2 as Mercedes did not want to lose an engine after discovering a water leak at the start, who set the pace early on running hard tyres.

Vettel then took over top spot with a 1m33.203s on medium tyres just before the half-hour mark as the track dried, and with it the times tumbled.

Rosberg then initially set the quickest time with a lap of 1m31.331s that was quickly beaten by Hamilton by 0.045s, and then 0.093s on the world champion's next attempt.

Ericsson's shunt followed before the late five-minute blast, but with Hamilton on top heading into qualifying.