The reigning world champion clocked a 1m12.271s on the soft tyre to finish 0.030s clear of title rival Rosberg, who can win the title with victory at Interlagos on Sunday.

Williams provided the strongest challenge, with Valtteri Bottas half a second off the pace in the third, a few thousandths clear of team-mate Felipe Massa.

The medium compound was the tyre of choice early in the session, with Hamilton outpacing his team-mate by 0.198s on those runs.

When the pair fitted the softs for their qualifying simulation around the halfway point of the session, Rosberg briefly went quickest only to be usurped by Hamilton.

Red Bull's Daniel Ricciardo was fifth quickest, 0.557s off the pace, a tenth ahead of team-mate Max Verstappen.

The Ferraris of Sebastian Vettel and Kimi Raikkonen were seventh and eighth respectively, seven tenths off the pace with Nico Hulkenberg one second adrift of Hamilton in ninth.

Jenson Button completed the top 10, but his session ended early with just 19 laps on the board. 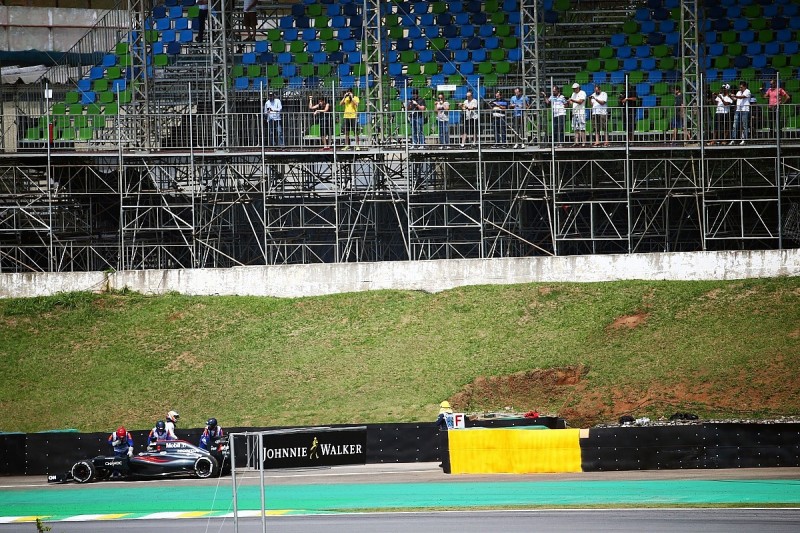 His McLaren team-mate Fernando Alonso also struggled, with his session ending prematurely when he was told to stop on track because the team had found a data anomaly in the ERS water pressure.

The Spaniard, who achieved the 11th quickest time, was restricted to just 18 laps.

Rather than heading back to the garage, Alonso took control of one of the trackside cameras, with some of the footage being used in the FOM broadcast.

It came a year after he sat in a deckchair after his McLaren ground to a halt in Q1, with pictures creating a social media sensation.

Daniil Kvyat outpaced his Toro Rosso team-mate Carlos Sainz by just over a tenth of a second to finish 12th quickest.

The Spaniard went wheel-to-wheel with Raikkonen through the infield early in the session, with the latter then cutting across the Toro Rosso on the main straight as he dived for the pits.

Romain Grosjean had a frustrating afternoon, complaining of having no power and then reporting that "something is wrong, very strange" as he went through Turn 1.