Mercedes driver Hamilton, who has failed in his previous nine attempts to win at Interlagos, finished the 90 minutes a tenth of a second quicker than Red Bull's Max Verstappen with a lap of 1m11.895s.

That was set on the soft tyre, the quickest of the three Pirelli compounds available this weekend, with Verstappen 0.096s behind, and championship leader Nico Rosberg 0.230s off the pace in his Mercedes.

Rosberg can clinch the title with a third successive win in Brazil, no matter where Hamilton finishes.

Daniel Ricciardo was fourth quickest in his Red Bull, almost half a second behind Hamilton, with the leading quartet comfortably ahead of the remainder of the field spearheaded by Valtteri Bottas's Williams.

The Finn finished 1.234s down, while team-mate and home hero Felipe Massa was eighth, a further two tenths of a second off the pace.

Force India pair Sergio Perez and Nico Hulkenberg were sandwiched in between the Williams duo, split by just four thousandths of a second.

Ferrari drivers Sebastian Vettel and Kimi Raikkonen were down in ninth and 10th positions respectively, both 1.6s adrift, although neither driver used the soft tyre. 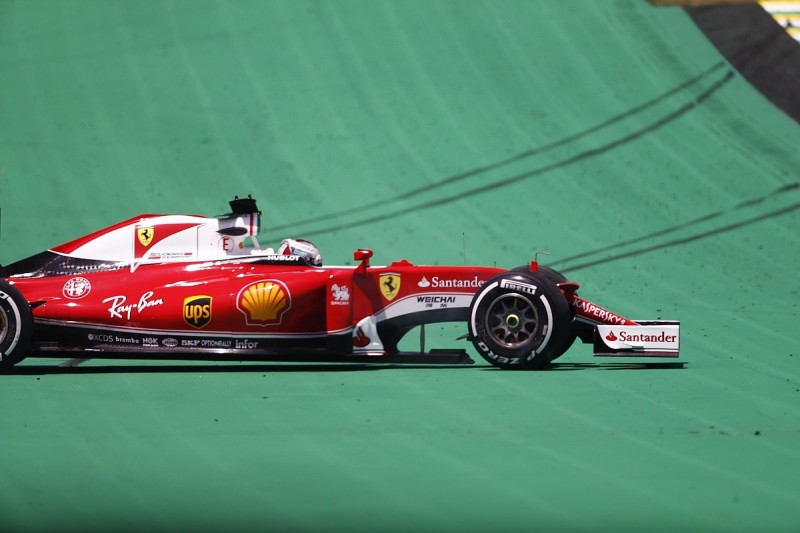 With three minutes remaining Vettel finished the session in ignominious fashion by spinning off at Mergulho on a set of fresh medium tyres.

The Ferrari pair were followed by Toro Rosso drivers Carlos Sainz Jr and Daniil Kvyat, the latter suffering a right-rear puncture after an hour that brought an end to his session.

Given Haas's brake problems of late, Romain Grosjean tried two different suppliers - Brembo, with which the team has had its issues, and Carbon Industrie.

On his first timed lap with the latter Grosjean locked up into Turn 1, and he suffered another lock up later in the session, with the Frenchman finishing 15th, 2.6s down.

Grosjean was joined on track by Charles Leclerc, who replaced Esteban Gutierrez, who is on his way out of the team to make way for Kevin Magnussen next year.

The 19-year-old GP3 points leader finished 21st, 3.496s down, one place ahead of Renault's Sergey Sirotkin, who replaced Magnussen for FP1.

Sirotkin managed just 10 laps for Renault before encountering a technical issue after 28 minutes.

Sirotkin was forced to park his car at the entry of the pitlane from where he was collected by a team of mechanics, but Renault was unable to get him back out on track.

Sergio Marchionne will not 'throw money' at Ferrari F1 team