Pierre Gasly realised how well his Hungarian Grand Prix was going when he saw blue flags being waved for the Formula 1 drivers he was lapping, not for himself

The Toro Rosso driver finished sixth, the highest-placed runner outside of Ferrari, Mercedes and Red Bull, to net his third big points finish of the year.

Gasly was the last driver to finish on the lead lap and started laughing post-race as he talked about his first experience of lapping cars on merit in the race.

"As soon as I started to arrive behind the Williams, I think [it was] actually the first time I saw blue flags for cars ahead of me," said Gasly.

"Usually the blue flag is for me, [to move aside] for the Ferrari or the Mercedes, but that was a pretty good feeling.

"I've been lapped in Bahrain [where he finished fourth]. I didn't lap other cars.

"It may be the first time I haven't been lapped and I've lapped other cars."

Having run a comfortable sixth for most of the race, Gasly was being caught by Kevin Magnussen towards the end before the Haas driver was lapped by race leaders.

Gasly said the race "went like a dream" even though he was "pushing flat out" because of that pressure.

He added: "If it looked like a lonely race, it was really hard work."

Toro Rosso's form has fluctuated significantly this season, with fourth in Bahrain and seventh in Monaco rare highs amid a struggle to establish itself a consistent place in F1's midfield battle.

The Hungaroring was always likely to suit its package better, given Honda's vulnerability at high-speed circuits like Silverstone and Hockenheim but its strong driveability paying dividends on low-speed tracks.

Gasly said: "After the last three, four races, I'm quite shocked again to be able to get that P6.

"We were so far, last weekend in qualifying we got stuck in Q1, behind one Williams.

"There are just tracks where the car works much better. It's quite surprising."

While Gasly charged to sixth, team-mate Brendon Hartley dropped out of the points after falling foul on strategy. 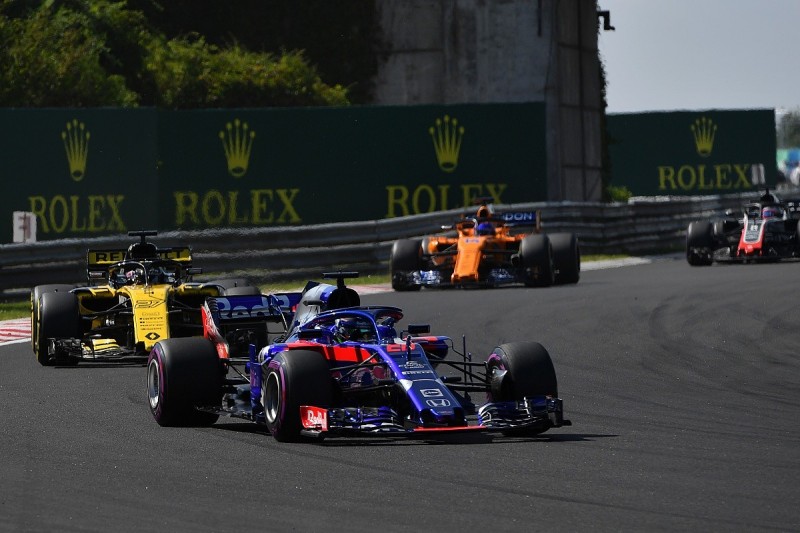 Hartley was one of the earlier stoppers in the race and that put him in a pack of cars held up by the long-running Esteban Ocon, which meant he was shuffled out of the top 10 by Fernando Alonso and Romain Grosjean.

The New Zealander said: "I didn't make any mistakes. It hurts to drop out of the points so early in the race with the strategy."

Hartley said after the race he would not criticise the call to pit early, which he explained was because Toro Rosso had focused on defending from a possible Nico Hulkenberg undercut.

"It's frustrating," he added. "I didn't do anything wrong all weekend but Pierre had a good race, he was in clear air.

"It worked out for Pierre, but not for me."